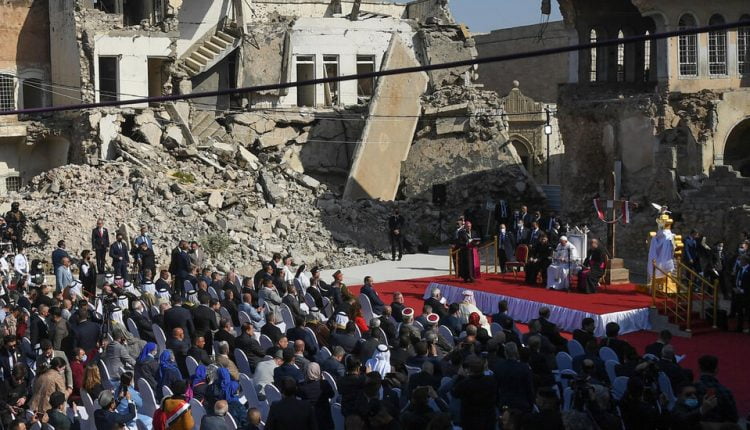 Amid the Rubble of Mosul, Francis Provides a Salve for Iraq’s Wounds

MOSUL, Iraq – After Islamic State took control of Mosul seven years ago and declared it the capital of its caliphate, the terrorist group tried to drive fear deep west by vowing to conquer Rome.

But when the Islamic State was driven from the city, it was Pope Francis, the leader of the Roman Catholic Church, who came to Mosul on Sunday. At an extraordinary moment on the last full day of the first papal trip to Iraq, Francis went to the wounded heart of the country and went straight to the suffering, persecution and sectarian conflict that have torn the nation apart.

“Now Rome has come here,” said Ghazwan Yousif Baho, a local priest who invited Francis to Mosul as he waited for the Pope to arrive. “He will bring his blessings to spread peace and brotherhood. It is the beginning of a new era. “

Other popes have dreamed of visiting Iraq, but Francis is the first to take the trip. In doing so, he has tried to protect an old but battered and shrunken Christian community, to build relationships with the Muslim world, and to assert himself on the global stage after being grounded for more than a year because of the coronavirus pandemic.

After praying for the dead in Mosul, Francis went to the northern cities, now home to many Christians, and attended a church full of jubilant – and often exposed – believers in Qaraqosh, home to the largest Christian population in the country.

He crossed Iraqi Kurdistan in a long and heavily armed convoy protected by helicopters. It sped past sprawling refugee camps to Erbil, where he ended the day he celebrated a mass for thousands in a stadium. There, too, the display of social distancing restrictions raised concerns that the Pope’s efforts to be close to his flock could endanger them.

But many Iraqi Christians have said that the chance of finding solace and healing after years of incalculable misery outweighs the risk of contagion. The trauma to the country and Francis’ efforts to heal it was seen in Mosul, Iraq’s third largest city.

The Pope arrived by helicopter. Underneath him, hollowed shells from mortar buildings and the rubble of houses stretched like a huge quarry. Fighting between Islamic State militants and US-backed Iraqi forces has essentially flattened the once vibrant and diverse city, killing thousands of civilians.

“Mosul welcomes you,” read posters that covered walls so littered with bullet holes it looked like a rash had broken out. Twisted wrought iron railings protruded from ruined buildings.

Francis spoke in a public square surrounded by the remains of four churches of different Christian denominations, all of which were badly damaged or destroyed.

Children and teenagers clad in white waving olive branches formed a corridor for the Pope’s arrival, and a choir in traditional clothing rose.

“The true identity of this city is the harmonious coexistence of people from different backgrounds and cultures,” said Francis, adding that the Christian population in Mosul – one of the oldest communities of its kind in the world – and around the world is shrinking The Middle East has “caused incalculable damage not only to the individuals and communities affected, but also to the society they leave behind”.

“How cruel it is that this country, the cradle of civilization, should have been hit by such a barbaric blow that destroyed ancient places of worship,” said Francis. Thousands of Muslims, Christians and Yazidis, he said, “have been cruelly destroyed by terrorism and others forcibly displaced or killed.”

Mosul’s once large Christian population shrank to a few thousand in the years following the US-led invasion of 2003, and in 2014 ISIS expelled those who stayed. Only around 350 Christians have returned since ISIS was driven out in 2017 – almost all of them to the more affluent east side, which has suffered far less damage.

“I therefore particularly welcome your invitation to the Christian community to return to Mosul,” said Francis, who praised young volunteers, Muslims and Christians, for the reconstruction of churches and mosques.

“I am sure it will be a first step for them to come back,” said Anas Zeyad, a Muslim engineer who is part of an international project to rebuild churches. He said that Christians who fled the city “have memories, have Muslim friends, have a home here”.

After Francis, who suffers from sciatica and limps badly, prayed for the dead and for the remorse of their murderers, he drove a golf cart to the Syrian Catholic Church, which ISIS had used as a courthouse. On the way he passed a cartoon mural of three girls playing with black faces. ISIS prohibits depictions of humans and animals.

“We lived here in Mosul, all together, Christians, Muslims,” ​​said Rana Bazzoiee, 37, a Christian and pediatric surgeon who fled Mosul before being taken over by ISIS in 2014, returning to the city could see the pope’s visit keep things better. “Why not?” She said. “We lived together in Mosul for a long time.”

On his hurricane journey, Francis sought to make significant strides in strengthening the bonds between his Church and the Muslim world. On Saturday, the most powerful and secluded Shiite in the country, Grand Ayatollah Ali al-Sistani, met with the Pope and issued a statement stressing that Christian citizens deserved it, “like all Iraqis in security and peace and with to live full constitutional rights “.

Francis called for brotherhood at a Saturday meeting of minorities in the desert plains of Ur. Traditional is the homeland of Abraham, which is revered by Christians, Jews and Muslims alike.

Two previous Popes had tried and failed to visit Christians in Iraq, but it was Francis who, as Pope, primarily reached the marginalized and forgotten who succeeded.

On Sunday afternoon the believers thanked him in Qaraqosh, the largest city on the Ninevah Plain, which is the Christian heartland of Iraq. They lined the streets in front of the Syrian Catholic Church al-Tahira and clapped and ululated as his vehicle approached.

Qaraqosh residents have spent the past three months preparing the city for the Pope’s arrival and over the past four years repairing the damage caused by ISIS. For many, Francis’ visit was an opportunity to celebrate the survival of the community.

A young priest in a scarf danced in the street near the church while a group of white-clad nuns held colorful balloons on a roof. Women and girls in traditional Christian clothing with brightly colored envelopes embroidered with scenes from church and domestic life waved olive branches.

Hundreds of people crowded into the church and caused a Vatican official to complain to the Iraqi organizers that there was not enough space between people in the pews. Masks were often ignored. But the coronavirus seemed to be the slightest concern of the companions.

Qaraqosh, just 20 miles from Mosul, was overtaken by the Islamic State in 2014 and detained for three years before being liberated by US-backed Iraqi forces. The 50,000 residents fled when ISIS arrived, and those who returned found houses burned and looted and churches badly damaged. About half of the population before 2014 never came back.

ISIS had turned many homes into car bomb factories – including that of Edison Stefo, a school principal who was one of the parishioners waiting in church.

He hoped the Pope’s visit would encourage Christians to return.

“It’s like a dream,” said Mr Stefo. “We feel like one of us – he’s from our area and knows what we’ve been through.”

The Pope ended the day by celebrating Mass in a stadium in Erbil. In the days leading up to the visit, the Vatican insisted that all events would be socially distant and safe as coronavirus infections increased in Iraq and concerns about potential crowds increased.

But the priests organized trips to Mass and packed buses with parishioners. More than 10,000 people, many with white hats decorated with the Pope’s face, entered the stadium. They hummed along with chants, expressing joy and relief that a Pope had finally come to find them.

Francis called himself “a pilgrim in their midst” and completed the last public event of his trip, which will end on Monday when he returns to Rome. “Today,” he said. “I can see firsthand that the Church lives in Iraq.”