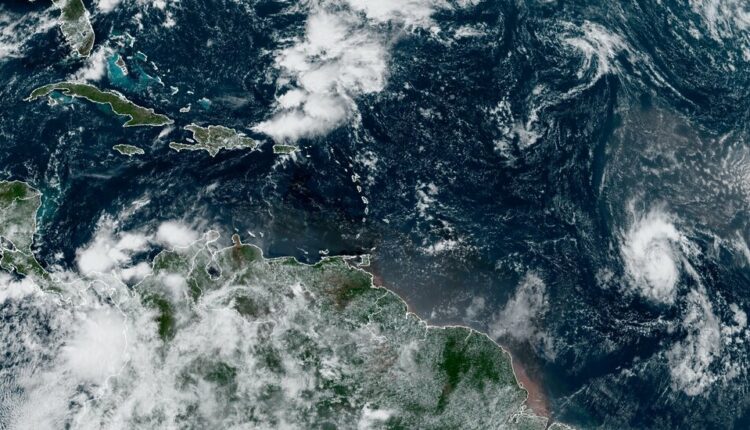 Tropical Storm Sam was set to become a “major hurricane” by this weekend after forming in the middle of the Atlantic on Thursday, the fourth named storm to develop in less than a week and the 18th overall in a busy hurricane season 2021.

From 11 p.m. East Coast Time, the storm was approximately 1,600 miles east of the eastern Caribbean and moving west at 15 mph with maximum sustained winds of 70 mph, according to the National Hurricane Center.

Sam was a “small” storm that “intensified very quickly” and was expected to become a hurricane “very soon”, the center said. There were no coastguards or warnings.

It was some dizzying months for weather forecasters as the arrival of the peak hurricane season – August through November – resulted in a series of named storms that formed in rapid succession, bringing stormy weather, flooding, and noxious winds to parts of the United States and the United States Caribbean.

Tropical storm Mindy hit the Florida Panhandle on September 8, just hours after it formed in the Gulf of Mexico, and as a powerful hurricane, Larry was also raging in the Atlantic.

Ida hit Louisiana as a Category 4 hurricane on August 29, before its remains brought deadly flooding to the New York area. Two other tropical storms, Julian and Kate, both fizzled out within one day at the same time.

Not long before that, in mid-August, Tropical Storm Fred hit land in the Florida Panhandle and Hurricane Grace hit Haiti and Mexico. Tropical storm Henri lost its power on August 22nd and brought record rainfall to the northeastern United States.

The links between hurricanes and climate change are becoming more and more apparent. A warming planet can expect stronger hurricanes and higher occurrences of the strongest storms over time – although the total number of storms could decrease as factors such as stronger wind shear could prevent weaker storms from forming.

Hurricanes also get wetter because of more water vapor in the warmer atmosphere; Scientists have suggested that storms like Hurricane Harvey in 2017 produced much more rain than they would without the human impact on the climate. In addition, rising sea levels contribute to higher storm surges – the most destructive element of tropical cyclones.

In May, scientists from the National Oceanic and Atmospheric Administration forecast there would be 13 to 20 named storms this year, of which six to 10 would be hurricanes, including three to five major Category 3 or higher hurricanes in the Atlantic.

NOAA updated its forecast in early August, predicting 15 to 21 named storms, including seven to 10 hurricanes, by the end of the season on November 30. Sam is the 18th named storm to form this year.

Last year there were 30 named storms, including six major hurricanes, which forced meteorologists to deplete the alphabet for a second time and switch to using Greek letters.

They were the most frequently mentioned storms on the record, beating 28 in 2005 and the second highest number of hurricanes.