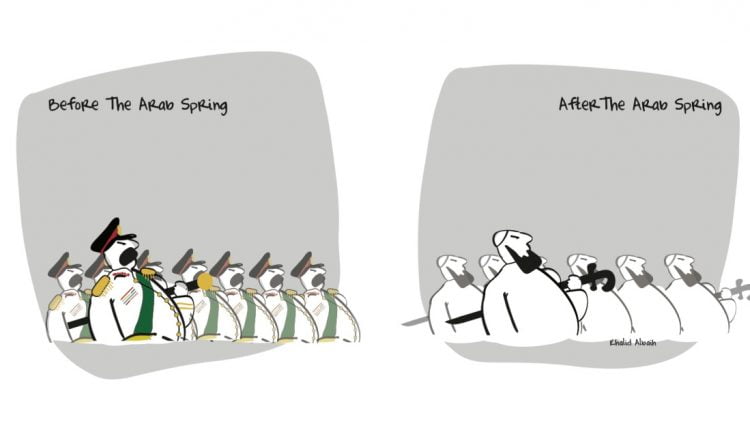 A decade since Khalid Albaih’s cartoons went viral during the Arab uprisings, he’s revisiting some of his favorite plays from the period.

It’s been a decade since young men and women across the Middle East and North Africa stood up and gave their lives to change the status quo while their leaders acted largely like a cartoon version of an old, wealthy, corrupt military dictator.

That made my job as a political cartoonist much easier, but also as dangerous as possible. Because nothing upsets a dictator who thinks he is more intimidating than someone who makes him look in the mirror to see how much he is really a joke; He knows that this will break the fear “his” people have for him.

I drew this original cartoon every now and then during the Arab Spring when I saw a pattern emerge in the region. In every country, after the fall of the dictator, religious movements almost always followed – one form of control replaced another.

For the past 10 years, people in the Arab world have continued to fight both aggressive military regimes and regressive religious ideologies. Thanks to Donald Trump’s four-year presidency in the United States, the increasing normalization of authoritarianism in the name of stability has numbed and even transmitted the feeling of concern about tyranny in the Middle East to the rest of the world.

[Copyright: Khalid Albaih]Ten years ago, Khalid Albaih’s cartoons about the Arab Spring went viral, with some even showing up on walls from Cairo to Beirut. In this series for Al Jazeera, he takes up some of his work and reworks it. It reflects the difference the last decade has made for people in the Middle East and North Africa.

The views expressed here are the author’s own and do not necessarily reflect the editorial stance of Al Jazeera.

How one can Defend Your Workers’ Psychological Well being Throughout a Lengthy, Arduous Winter