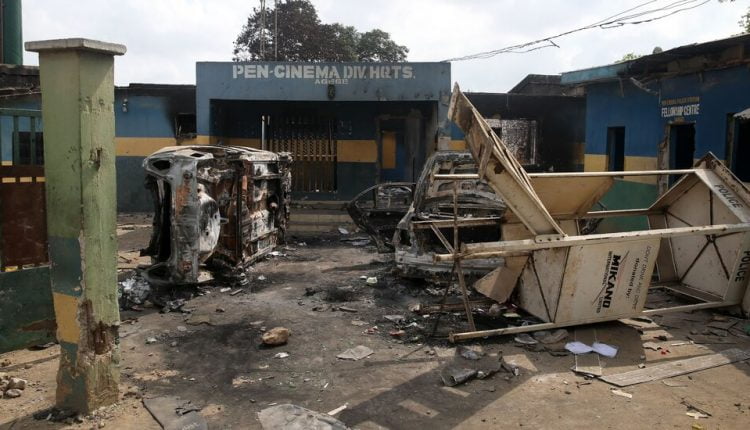 LAGOS – Nigeria’s police chief on Saturday ordered all police resources to be mobilized to reclaim public space after more than two weeks of peaceful protests against police brutality gave way to widespread vandalism and looting.

The order came four days after police and soldiers shot at protesters, killing 12 people and injuring hundreds in an upscale Lagos neighborhood. The protesters are demanding that the government dismantle and discipline a police force called SARS, the Special Anti-Robbery Squad, which has been known for years to arrest, brutalize and steal citizens, especially young people.

Violent crackdown on protesters on Tuesday, coupled with a nightly curfew and protest leaders urging people to stay home, largely cleared peaceful protesters from the streets of Lagos.

After the shootings that outraged Nigerians, at least 17 police stations in Lagos were destroyed, according to a police spokesman.

There was also widespread looting, including in government camps filled with food. Shopping malls, television stations and banks, as well as retail stores in popular shopping areas in Lagos, Nigeria’s commercial and cultural hub, have been targeted.

“Enough is enough for all acts of lawlessness, disturbance of public peace and order and willful violence that have led to indiscriminate looting of shops, shopping malls and warehouses, property damage and death in some parts of the country,” said the police chief, MA Adamu, in a statement on Saturday night.

Additional police units are being deployed in all 36 states, Adamu said. He added that the police “would use all legitimate means to stop the further slide into lawlessness and robbers”.

Violence and looting have also been reported in other states.

On Saturday, the governor of the southwestern state of Osun, Adegboyega Oyetola, imposed a 24-hour curfew “to prevent the breakdown of law and order and to protect the lives and property of citizens and residents.”

Dozen have died in the protests against police brutality that began on October 8th. On Tuesday alone 38 were killed across the country, Amnesty International said. The turmoil was the worst violence on the street since Nigeria’s return to civil rule in 1999.

Many of the protesters were middle-class, well-educated young people in the southern and central cities and too young to remember the military rule that ended two decades ago.

The government has promised to reform the police force following the protests, but President Muhammadu Buhari has been criticized for failing to mention Tuesday’s shooting and for warning Nigerians not to “undermine national security”.

He further inflamed protesters on Friday by saying the security forces were “extremely reluctant” to deal with the situation.

Mr Buhari said 51 civilians have been killed, along with 11 police officers and seven soldiers since the protests began.

Protesters said the rise in violence this week could affect their peaceful reform efforts and allow the government to view the movement as being hijacked by criminal elements.

“The looting doesn’t put us in a good light,” said Chiamaka Ebochue, 27, a protester in Lagos. “We have to accept this loss and re-strategize. We have to be aware of our voting rights – this is the only ammunition we have. “

Tony Iyare contributed to the coverage from Lagos.