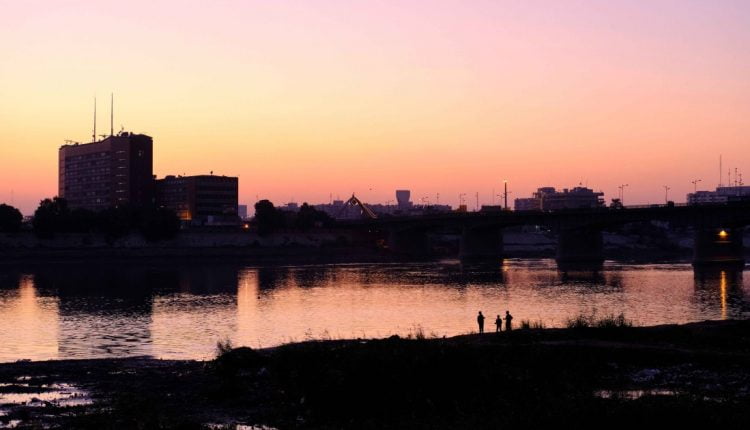 Baghdad: A solitary stroll by means of against the law scene | Center East Information

It was quiet in the gardens of Abu Nawas Street on a winter evening. I took a stroll in downtown Baghdad and decided to stroll down the once elegant boulevard along the Tigris.

Clouds of smoke billowing from garbage burned on the edge of the water barked stray dogs between lonely men drinking alcohol hidden in plastic bags. A drunk squeezed his penis and leisurely sprayed his urine into a puddle.

On the main street, the solemn faces of “martyrs” and living militiamen on numerous street posters seemed to cast threatening glances at the traumatized civilians stuck in traffic.

Militia flags fluttered in the wind from broken lampposts. Some of them had “Justice League” stamped in green on a white background. It felt like Abu Nawas Street was keeping up with the times.

A few days earlier, armed men had appeared on television in camouflage who claimed membership in the “League of the Just” and threatened the Iraqi Prime Minister himself of arresting one of their comrades who had allegedly planned a missile attack on Baghdad’s occupied “Green Zone” . .

A militiaman from another group issued a statement declaring his intention to chop off the prime minister’s ears. As a result, the hashtag “al-Kadhimi’s ears” was trending on social media for days.

These daring threats were confronted with pompous tirades of sovereignty and the standing of the state delivered by politicians endlessly committed to enforcing the rule of law in a lawless country.

They have failed miserably for nearly two decades. Armed men continue to threaten, kidnap and murder civilians at will. They are still awkwardly firing rockets at the US embassy that are killing innocent Iraqis instead of hitting them.

According to Iraq Body Count, an organization that records violent deaths in Iraq, 902 civilians were killed in 2020. Many of these victims died in the protests known as the October Uprising because they demanded decent living in a safe home.

Meanwhile, hunger was spreading at an unpredictable rate across Iraq. In the summer, the United Nations expected the poverty rate to rise to around 40 percent. That was before the dinar was devalued, which further exacerbated the suffering of Iraqis.

The prevailing poverty was evident in Abu Nawas.

Children in mismatched flip-flops and torn tracksuits sold juice and water near Mohammed Ghani Hikmat’s statues of Shahryar and Sheherazade. Exhausted salespeople sat on the side of the road, hoping a driver would bring them over and buy anything they sold cheaply.

Woman buys fish at al-Wathba Square in Baghdad, Iraq on December 6, 2020 [Nabil Salih/Al Jazeera]But poverty wasn’t the only noticeable presence on the street. Although the Iraqi government is unable to ensure the safety of its citizens, it insists on securing its public spaces.

As I walked along Abu Nawas that evening, it felt like I was visiting a barracks. Parts of the sidewalks were surrounded by accordions or occupied by military vehicles. I was stopped three times within an hour by security guards because I had a camera hanging from my neck.

“Where are you going?” one of them said in a commanding tone before asking me to take his picture.

As I walked, I thought of Abu Nawa’s famous Masgouf restaurants that serve the best of traditional grilled carp. In a campaign to renovate the street in 2012, the community demolished it, among other things to “misuse” it, ie to serve alcohol.

There are still a few dirty liquor stores in Abu Nawas. When the sun goes down, these facilities are the only source of light in the long stretches of darkness along the road. So far they have succeeded in pulling through threats from the untouchable militiamen.

I soon descended from the main road into one of the street’s unkempt gardens to capture the sun’s last kisses with the Tigris. An old man sat on a child’s swing, swaying back and forth and swallowing a beer. What was he thinking of? Has he lost a brother or sister to anonymous assassins? Or did America’s liberation missiles wipe out its children?

With my camera in hand, I framed my shot, pressed the shutter button and recited the words the late Iraqi poet Sargon Boulus wrote from his self-imposed exile:

is the drowned man’s hair

Who returned to the party

After they turned off the lights

Stacked the chairs on the barren river bank

and chained the waves of the Tigris

From Abu Nawas I made my way to al-Rashid Street and passed the al-Jumhouriya Bridge on the way. In Jisr al-Jumhouriya, security forces killed and injured so many unarmed youths during the 2019-2020 protests. 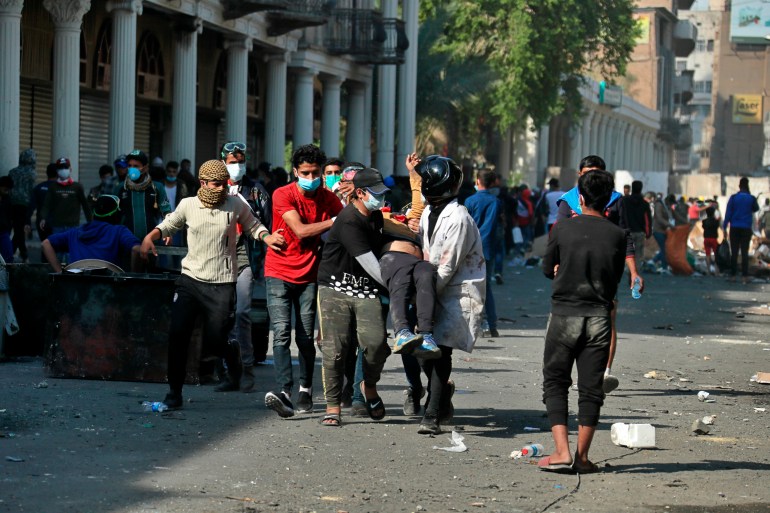 An injured protester is looked after during clashes between Iraqi security forces and anti-government protesters in Baghdad, Iraq on November 22, 2019 [AP/Hadi Mizban]At that time, the Iraqis marched en masse and demanded a “homeland”, but received sharp bullets instead.

As I made my way to al-Rashid, I looked in the direction of al-Tahrir Square. The palm trees were wrapped in white and green neon lights. Was it for christmas? Even the palm trees and the Jawad Salim Freedom Monument were hit by tear gas canisters in 2019.

As I was walking on al-Rashid Street, I remembered one of the victims of the crackdown – Saif Salman, 26, whom I met in 2019 while he was recovering at a Médecins Sans Frontières hospital in Baghdad. I decided to call to check on him. He burst into tears as we discussed the events of October 2019.

“I don’t regret it,” he said, sobbing over the phone. “It was a moral duty that I had to fulfill”.

On October 25, 2019, he joined a crowd of angry youth on the bridge who wanted to overthrow the regime. A military-grade tear gas canister hit his right leg and stuck in the bone. His leg had to be amputated.

The current government promised accountability and punishment for those who instigated violence against the peaceful protesters. But the protesters are still being killed, and like millions of Iraqis, Salman did not believe these promises. “We’re already dead to them,” he told me.

When I finished my call, al-Rashid was shrouded in darkness. There were no cinephiles in front of the famous Cinema al-Zawra. Apart from a few soldiers, what was once the most elegant street in town was empty.

A couple of street lamps worked, lighting the ornate facades that had withered from years of neglect. Building carcasses crumbling from the inside leaned sideways and barely stood on painful pillars.

On their frequent forays into restoration work to polish up the ancient city’s lost prestige, the community sends workers to paint these pillars. The paint will usually peel off a few days later.

As I was making my way into the night, a young man appeared from a dark alley and I asked if he lived here. “It’s quiet here. Few families stayed, ”he said.

He showed me a scar on his left arm. “This is from a stun grenade,” he said. He showed me one more bullet on his right leg. He too had joined the protests in 2019.

The footage on his phone showed people swarming in the middle of the same street we were standing on. “You killed a guy here,” he pointed to a spot behind us. 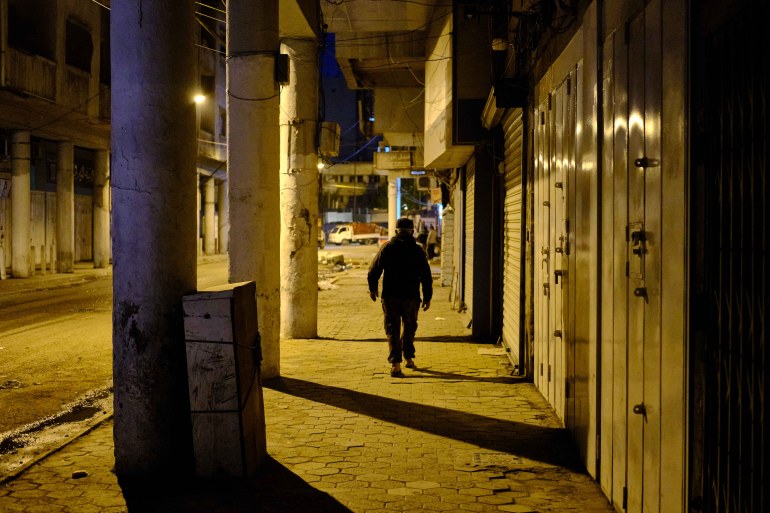 Man walks an empty street in downtown Baghdad on December 6, 2020 [Nabil Salih/Al Jazeera]“They say it was the Iranians. That’s a lie. It was the Iraqis who killed protesters, ”he said, referring to the Iraqi security forces.

I said goodbye and continued my stroll through downtown Baghdad. I passed the former McKenzie bookstore that’s now a shoe store: a transformation that illustrates the country’s nosedive after the 2003 US invasion.

I could see stray dogs rummaging in garbage bags piled on the sidewalks. They reminded me of the dogs gnawing at the corpses that lay in the streets of Baghdad when America’s emancipatory search peaked in 2003.

Eighteen years have passed and yet Baghdad still feels like it is at war. Military helicopters still rush down impoverished alleyways where teenagers are condemned to a miserable existence looking for work only to return home in a coffin to have their portraits adorned living rooms in which old women sit in silence and in pristine grief drown.

The views expressed in this article are the author’s own and do not necessarily reflect the editorial attitudes of Al Jazeera.

Sheryl Underwood Speaks Out Following Her Change With Sharon

Three Methods to Get rid of Pointless Conferences