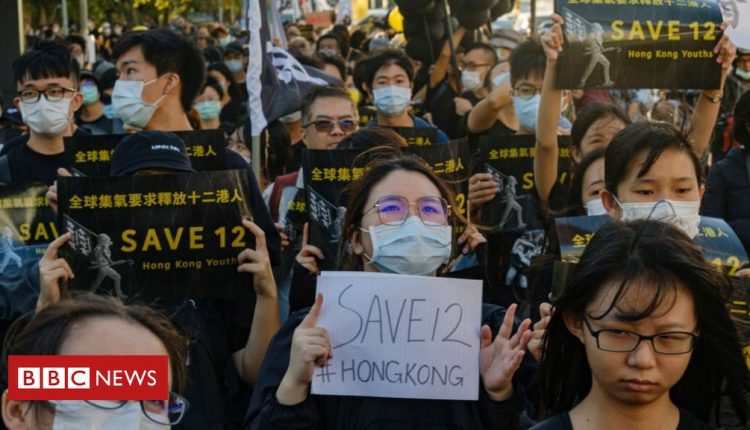 Ten Hong Kong activists arrested at sea while trying to flee to Taiwan by speedboat have been detained by China for between seven months and three years.

Two others – Hong Kong 12 Youth Group – are minors and are being returned to Hong Kong.

The activists were caught in August making a rare attempt to flee the city after Beijing introduced a tough new security law in June.

They were accused of having made or organized an illegal border crossing.

The remaining eight activists were sentenced to a “lighter sentence” of seven months in prison for illegally crossing the border.

The two minors, aged 16 and 17, will be handed over to Hong Kong police, Chinese state media reported earlier Wednesday.

The Hong Kong case 12 has drawn widespread worldwide attention at a time of growing fears about the volatility of the freedoms of the semi-autonomous territory.

Following the conviction, the rights group Amnesty International said the juveniles were “at risk of torture if convicted in an unfair trial”.

They had been held with virtually no contact with the outside world since they were detained in the southern Chinese city of Shenzhen after they were arrested.

The activists’ families said they were informed of the date of the trial three days before the hearing, which was closed to foreign reporters and diplomats. Their lawyers were not allowed to meet the inmates.

What led to their arrest?

The 12 Hong Kong residents, aged between 16 and 33, were intercepted at sea by the Chinese Coast Guard on the morning of August 23, just 70 km southeast of Hong Kong.

Most on board were already indicted at home, which had to do with the major protests for democracy that had ravaged the former British colony last year.

That meant they couldn’t leave the area by regular means.

At least one of the activists has been investigated under the controversial national security law.

Since late last year, Taiwan has become a tacit haven for activists in Hong Kong escaping growing crackdown on protesters.

The Washington Post reports that hundreds of Hong Kongers have sought refuge on the island, most legally by air, but some with smugglers to reach by boat.

The case of the 12 detainees has highlighted the growing struggle for democracy activists in Hong Kong, which was once a major target for refugees fleeing persecution.

For months after their arrest, the activists were detained in the mainland city of Shenzhen without charge.

A few weeks ago, the Chinese authorities finally charged ten members of the group: eight were charged with illegally crossing the line of up to two years in prison, while two faced the more serious charges of organizing the crossing with up to two years can be punished for seven years.

The defendants were brought to trial in Shenzhen on Monday.

The hearing was closed to foreign reporters and diplomats – like many in China – but the court said in a statement that both prosecutors and defense lawyers spoke.

The two teenagers were taken back to the Hong Kong police around noon, the AFP news agency reported.

Activists’ lawyers said the eight who received the lesser sentences should be able to return home on March 24 to take into account the time they have already served.

They also said the penalties were too severe and that the charge of organizing a border crossing was unfounded, according to AFP.

What did the families say?

The activists’ families had previously voiced their concerns about the fate of those detained in China’s notoriously opaque judicial system.

The Chinese attorneys who hired some of them were not allowed to see their clients when the authorities stepped in to appoint a state-approved attorney.

Over the weekend, the families published an open letter to the international community asking for their help in “safeguarding the legal rights” of detainees 12.

They requested the hearing to be broadcast live after they were not allowed to appear in person due to Covid-19 restrictions and were not informed of the hearing date until Friday.

At a press conference in Hong Kong earlier this week, relatives of some of the detainees advocated transparency.

“I ask the courts to come to a judgment quickly,” said the mother of one of the defendants, according to Reuters. “If you give him a sentence, I can see him. I just want to see his face once.”

The high-profile case was closely watched in Hong Kong and abroad when a rare case by Chinese authorities arrested people trying to leave the territory at a time of growing concerns about its eroding autonomy.

Hong Kong 12 supporters have gathered in at least a dozen cities around the world – from Taipei and New York to Adelaide and Vancouver.

Hours before the trial on Monday, the US embassy in China called for the activists to be “released immediately”.

“Their so-called ‘crime’ was to flee from tyranny,” a US embassy spokesman told AFP.

The Chinese State Department responded, urging the US “to immediately stop meddling in China’s internal affairs through the Hong Kong issue”.

More on this story