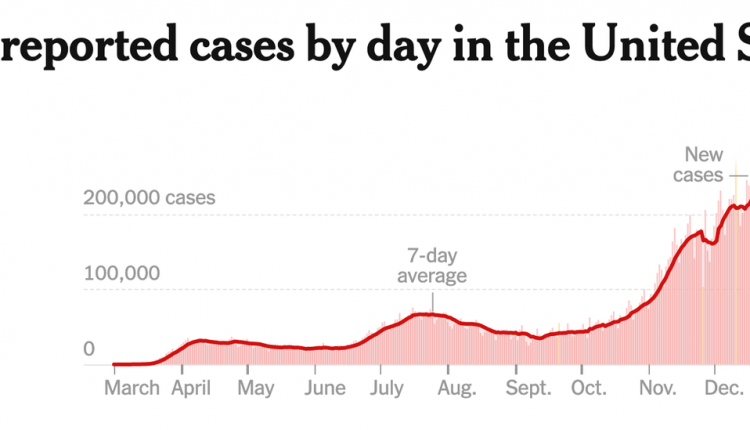 Despite Dr. Anthony Fauci, having vaccinated Santa Claus, and NORAD’s annual wink-wink chase of his sled, this is clearly an interrupted holiday season from pole to pole.

Bethlehem, the seasonal focus of international Christianity, planned a humble midnight mass instead of the usual star-studded blowout. All intensive care beds in the city’s hospitals are occupied, the Ministry of Health said.

Rome, which cradles the seat of the Roman Catholic Church, will also be gloomy. Italy, like many European countries, is subject to strict restrictions to slow the increase in infections and deaths.

And in the United States, where more than 327,000 people have died from the coronavirus and infections overwhelm the southern states, families face empty seats and economic despair. Many cannot afford large meals or gifts, and those who celebrate can do so alone, in their own households, or in small groups.

Worryingly, this is no different from Thanksgiving, which has contributed to the current surge in infections and deaths through micro-spreading events.

Christmas could pose an even greater risk: there are more viruses circulating, and it’s a longer holiday season when people are used to having multiple gatherings over several days.

US air travel is down 60 percent compared to that time last year, but more than a million people still passed the Transportation Security Administration checkpoints as of Wednesday, most since March.

However, don’t expect spikes to be reflected in the data right away. At least 15 states will not be releasing statewide data for Christmas, and some test sites will close or limit their opening hours. The 7-day new case average, perhaps the best indicator of the national outlook, is expected to be skewed until at least January 8th.

“The darkness seems pretty dark right now,” said Rev. Timothy Cole, a Washington episcopal priest who has recovered from his own battle with the virus. But like other Christians around the world, he finds hope in the spiritual meaning of the holiday story: a small event, the birth of a child, that turned out to be a turning point in human history.

And like many Christian priests, Mr. Cole hopes to awaken hope with his Christmas sermon this year: “Just as wars end, so do pandemics,” he says in his readings. “Until then, we will be empowered and empowered by what we celebrate that day.”

In the early days of the pandemic, scientists predicted that the coronavirus would be under control if 60 to 70 percent of the population were resistant to the virus, either through antibodies or vaccination.

This is herd immunity when there are simply not enough hosts available.

First of all, Dr. Fauci, the leading epidemiologist in the US, hit the same ballpark that came from animal testing. “When polls said that only about half of all Americans would take a vaccine, I said herd immunity would be 70 to 75 percent,” he recently told my colleague Donald G. McNeil Jr. in a telephone interview.

Dr. However, Fauci admitted that he had gradually increased his estimate. About a month ago he started saying “70, 75 percent” in television interviews. Last week he raised it to “75, 80, 85 percent”.

“When recent polls said 60 percent or more would make it, I thought, ‘I can shake it up a bit,” he said over the phone.

Dr. Fauci said he was initially cautious about publicly raising his estimate because Americans were hesitant about vaccines. But now that health care workers proudly post their connected biceps on social media, some polls show that many more Americans are ready, even eager, to get the shot.

Dr. Fauci has deliberately moved the goal posts, based partly on gut instinct and partly based on new science about how the virus works in human populations. Now he believes it takes nearly 90 percent immunity in a population to stop the virus. That’s roughly what it takes to stop measles, which is considered to be the most contagious disease in the world.

The new, more infectious variant of the coronavirus that is appearing in the UK, South Africa and possibly other places can further increase the percentage required.

A year of resilience

As much as the pandemic was a story of loss, it was also a story of resilience – of people, families, and communities who not only survive but find ways to help others.

International correspondents for the Times told stories of unlikely joy and creativity, bright spots in the middle of the sea of ​​darkness. In Brazil, a teacher created a “hug kit” for her students. Italians read to older people and are at home on the phone. A man was crossing Wuhan, China to feed stranded cats when the city’s pandemic separated them from their people.

“It was worth it, not just for the cats, but also so that the owners can have peace of mind,” he said. “When I look back on that time now, everything feels like a dream.”

We’re not going to celebrate Christmas with my parents this year. You live an hour away from us. On Tuesday night, after practicing our five songs for five nights, my husband and I took our three children, rang my parents’ door, and sang them and my sister (who was quarantined with them) Christmas carols outside on the porch with our masks that completely cover our faces. It is the first time in my life that I have given my mother, father and sister exactly what they wanted for Christmas. – Megan K. Farrelly, Raleigh, NC

Big news aside, the coronavirus briefing is open until the new year.