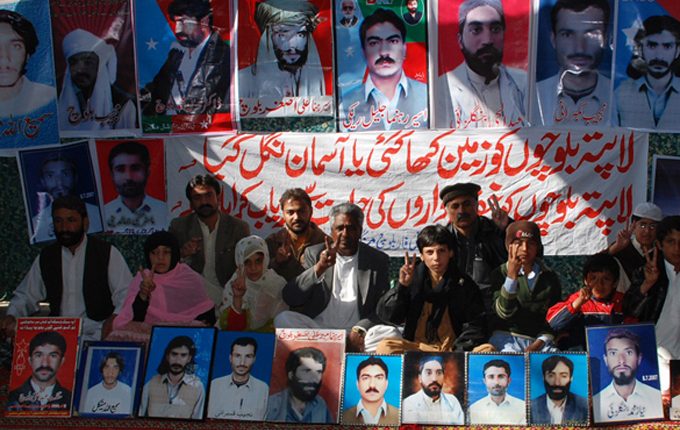 In February 2020, Haseeba Qambrani, a young woman who lives in Pakistan’s southwestern Balochistan Province, received shocking news: her brother Hassan and her cousin Hezbollah had disappeared. This wasn’t the first time her family had seen such a tragedy. Just a few years earlier, in 2015, Haseeba’s other brother Salman and cousin Gazain were missing. A year later, Haseeba’s family discovered their mutilated bodies.

The whereabouts of Hassan and Hezbollah are still unknown a year later, and Haseeba is still trying to find them. She is not alone in looking for loved ones kidnapped in Balochistan over the years.

Balochistan borders Afghanistan and Iran. Full of mountains and deserts, I call this place my home. Thousands of men and boys have disappeared here by force, have been detained for long periods without contact with the outside world, or have been killed extrajudicially over the past two decades.

My own uncle, Ali Asghar Bangulzai, was kidnapped in 2001 from Quetta, Balochistan’s provincial capital. Twenty years later we still don’t know where he is. Deen Muhammad, a local doctor, suffered the same fate in June 2009 and his wife and two daughters Sammi and Mehlab are still looking for him. In October 2016, a student leader, Shabbir Baloch, was disappeared during a military operation. His relatives are still waiting for him to return.

I could go on As co-founder and chairman of the Voice for Missing Persons in Baluch (VBMP), a grassroots collective that has forcibly disappeared family members from Baluchistans, I have recorded more than 5,000 such cases. Other grassroots movements across the country have also collected terrifying stories of fathers, brothers and sons who were picked up by security forces in other parts of the country and disappeared without a trace over the years.

Several organizations including the Pakistani Commission on Human Rights, Amnesty International, Human Rights Watch and the UN Working Group on Enforced Disappearances have confirmed that the security forces are the prime suspects behind the disappearance. When I admitted cases to the Supreme Court on behalf of the VBMP in 2012, a three-judge bank officially stated that based on the evidence, it was clear that law enforcement was behind the abductions.

The security forces do not deny their role: they say that they are looking for “militants”. In 2019, they said that some of the missing may have joined “rebel groups” and not “not every missing person is imputable to the state”. However, the practice began 20 years ago under the supervision of military ruler Pervez Musharraf after the 9/11 attacks and the US invasion of Afghanistan. Musharraf allied the country with the US in the so-called “war on terror” and assisted the US in the kidnapping, illegal detention and torture of suspected “militants”.

Soon this extrajudicial practice spread throughout Balochistan and began to be used against anyone who demanded social justice and equality. Many political workers, students, teachers and activists who have committed no crime other than trying to help those in need or demanding fundamental rights and freedoms for Baloch communities have been targeted.

Take the case of my uncle Ali Asghar Bangulzai. In 1998, a Baloch community called Marris left the Afghan city of Kandahar, crossed Pakistan and settled on the outskirts of Quetta to protect themselves from the Taliban. They emigrated to Afghanistan to escape a counterinsurgency campaign in Pakistan in the 1970s. My uncle witnessed their arrival and organized help for them out of concern for their welfare. He distributed food and blankets, and even made some school and health arrangements for members of this impoverished and displaced community. He also set up a small support committee that I was a part of. For these efforts he was kidnapped.

For more than a decade, families have organized themselves under the VBMP, protesting in front of press clubs, going to court and meeting politicians in order to find our missing relatives and to prevent other families from experiencing the same pain.

We’ve had a few wins and a lot of setbacks on our journey. Since our protests began, several officials from the Pakistani state have admitted that security agencies were responsible for the enforced disappearances. These recordings led to the establishment of the Enforced Disappearances Commission in 2011. However, the Commission has not achieved much in the last 10 years.

In 2019, the Ministry of Human Rights drafted a bill to criminalize enforced disappearances, which gives us hope that this illegal practice could soon come to an end. However, the draft has since disappeared into a bureaucracy network and is unlikely to be accepted as law anytime soon.

Last year, following negotiations between the VBMP and the provincial government of Balochistan, several people who had been missing for some time were released. We also saw some improvement in the duration of the disappearance – instead of disappearing men and boys for months or years, the security forces began releasing many of those who had illegally abducted them after a few days or weeks. But thousands of people, including my uncle, are still missing and the authorities still seem unwilling to give us any answers or take action against the illegal practices of the state security forces.

Last month I traveled to the capital Islamabad with thirteen other members of the VBMP, frustrated by the lack of progress on our relatives’ cases. We sat in front of the Islamabad Press Club and urged the government authorities to look out for our plight. When no one from Prime Minister Imran Khan’s government came to speak to us, we took our protest outside D-Chowk – a square in the government district near the Prime Minister’s office, Parliament and the Supreme Court.

We sat outside on the street in freezing temperatures for days, making it clear to people around us that we had no intention of leaving before speaking to someone in the government. Members of the opposition visited us first, and then several parliamentarians from the ruling party also showed up.

The parliamentarians of the ruling party promised to find out the whereabouts and conditions of our relatives. They also assured us that if our loved ones are in state custody, they will either be released or tried publicly in a civil court. In subsequent meetings with Federal Minister of the Interior Sheikh Rashid Ahmed, Federal Minister for Law and Justice Mohammad Farogh Naseem, Federal Minister for Human Rights Shireen Mazari and the head of the investigative commission for enforced disappearance, Justice Javed Iqbal, we were promised measures on these points until March 13th.

We are now waiting for the government, the judges and the bureaucrats to take action and give us some real answers. We are hopeful yet cautious as we have been disappointed with promises that have often turned out to be empty.

What we want from the government is actually very simple. As Pakistani citizens, we have constitutional rights. We only ask that these rights are safeguarded and respected. We want to know where our relatives are and what they have been through since they were kidnapped. If they are charged with crimes, we want those allegations to be made public. We are ready for our loved ones to be brought to justice. What we cannot accept is their disappearance. If the Pakistani security forces are not behind their disappearance, we would like them to work with us to find out what really happened to them, as well as their constitutional duty.

Today Pakistan is battling not only the coronavirus pandemic, but a deadly epidemic of enforced disappearances. It is time for our elected officials to acknowledge our suffering and help us find loved ones.

The views expressed in this article are the author’s own and do not necessarily reflect the editorial attitudes of Al Jazeera.

Meghan Markle And Prince Harry Inform Oprah About The Intercourse Of Child Quantity 2 – Discover Out What They’re Having!