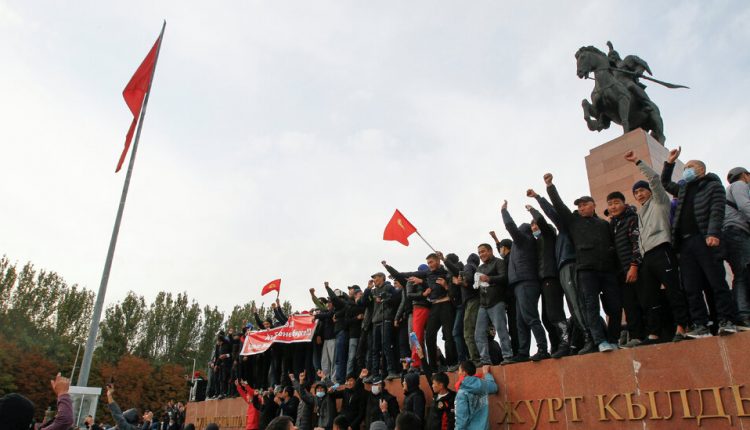 MOSCOW – Four days after disappearing during a wave of attacks by opposition protesters on government buildings, the Kyrgyz President declared a state of emergency on Friday in the capital of his Central Asian country, ordering the military to stop the riots and restrict residents to their homes and ban public ones Gatherings.

Believed President Sooronbai Jeenbekov announced the measures in a decree issued from an undisclosed location and published on his official website.

However, it was unclear whether Mr Jeenbekov, who went into hiding after violent protests against a controversial parliamentary election on Sunday, could enforce the state of emergency without a functioning government.

Due to pressure from the streets, Mr Jeenbekov officially sacked the Prime Minister, the Chief of Armed Forces and the country’s security chief on Friday.

The dismissed officials had already given up their posts and decrees announcing their departure merely recognized an accomplished fact dictated by the President’s enemies.

In a separate statement early Friday, the president said he could step down too, saying he was ready to step down once a new cabinet was appointed and “we are back on the road to legality”. However, his subsequent declaration of a state of emergency suggested that he might try to hold onto power. He appointed a deputy minister of the interior to be the “commander” of the capital, who is responsible for enforcing the emergency measures.

The prospects for an orderly transfer of power have worsened in recent days, mainly because the opposition is deeply divided. Lawmakers in charge of appointing a prime minister have held rival meetings at a hotel and movie theater but have failed to agree on a new legitimate government that could fill the power vacuum.

The turmoil in Kyrgyzstan, a former Soviet republic and the only country in Central Asia with a minimum of democracy, follows two months of unrest in Belarus, another former Soviet country, and a military conflict ensues between two other former republics, Armenia and Azerbaijan . The simultaneous crises blinded the Kremlin and led President Vladimir V. Putin of Russia to restore order in what Moscow describes as “close to the rest of the world” and which is of vital importance to the stability of the country.

Russia has military bases in Kyrgyzstan and Armenia as well, but has so far refrained from flexing its muscles on the ground in favor of one side or the other in deeply ingrained local disputes.

The head of the Russian Federal Security Service (FSB), the most important successor organization to the KGB from the Soviet era, spoke to the acting head of the Kyrgyz security service earlier this week and offered help to contain the chaos in Bishkek, the capital of Kyrgyzstan. But that Kyrgyz official, Omurbek Suvanaliyev, lost his job on Thursday.

In a separate attempt to contain the turmoil in the former Soviet countries, the Russian Foreign Ministry is holding a meeting in Moscow on Friday between the foreign ministers of Armenia and Azerbaijan on a possible ceasefire in their struggles over the disputed Nagorno-Karabakh region.

The violence followed the opposition’s allegations of vote-buying and other irregularities in Sunday’s parliamentary elections, which brought the victory to pro-government parties. The protesters confiscated government buildings and Mr Jeenbekov went into hiding while insisting that he was still ruling the country.

Mr Jeenbekov is the second president of a former Soviet republic to struggle to survive after a controversial election. In contrast to the authoritarian President of Belarus, Aleksandr G. Lukashenko, Jeenbekov presides over a country that had a lively free press and many opposition parties, at least until the state of emergency on Friday, which imposed restrictions on the media.

Instead of bringing stability, Kyrgyzstan’s relatively democratic system has paved the way for regular political unrest in a country marked by clan rivalries and deep divisions between north and south.

Two of Mr. Jeenbekov’s predecessors were overthrown in violent revolutions and fled abroad to avoid arrest. His immediate predecessor, Mr. Atambayev, who is from the north, served his sentence but was thrown in prison after leaving office, a fate that southern Jeenbekov now wishes to avoid.

However, it will be difficult to find a deal that will guarantee his future freedom as Mr Atambayev, who was released from prison by his supporters earlier this week, was busy fighting his successor and persecuting Mr Jeenbekov to promote.

Ivan Nechepurenko contributed to the coverage.