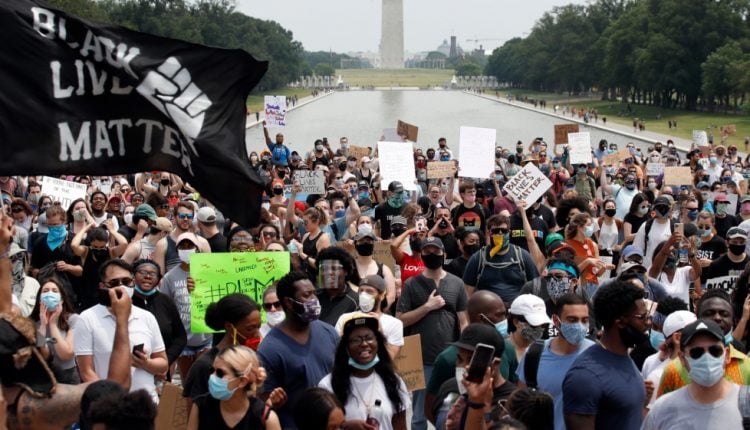 Anger had been building over the March 13 police killing of 26-year-old Breonna Taylor in Louisville’s West End. Not long after Taylor’s story gained national attention, the world watched footage on May 25 of George Floyd screaming, “I can’t breathe” and crying out for his mother under the knee of a white police officer before going motionless in Minneapolis, Minnesota.

It was not only important for the new people, especially Louisville’s youth, who joined the protest to stay as safe as possible, but also for demonstrators to stay in the streets, Helm, a co-founder of Black Lives Matter Louisville, said.

“I had to do direct action training with them on the fly,” the 40-year-old recalled.

Hundreds of protesters rallied in the city’s downtown, demanding justice for Taylor, who was killed when plain-clothes Louisville Metro Police Department (LMPD) officers barged into her home in the early morning hours while serving a “no-knock” warrant.

As the sun went down, tensions rose. Police, dressed in riot gear, fired tear gas and other projectiles. Some protesters destroyed property and set fires. Many people suffered injuries, including seven who were wounded when someone opened fire into the crowd. It was a night that shook Louisville, and for protesters, it was only day one.

In this file photo from May 29, people gather in the street during a protest against the deaths of Breonna Taylor by Louisville police and George Floyd by Minneapolis police, in Louisville, Kentucky [File: Bryan Woolston/Reuters]Protesters, organisers and activists have gathered in some form on most, if not all, of the more than 200 days since then. The groups sometimes number in the hundreds; other times, only a few gather in a downtown park, renamed by protesters as “Injustice Square”. The protests often bring people from Black Lives Matter, Louisville Urban League, Kentucky Alliance Against Racist and Political Repression and other groups.

Seeing protesters gather day-after-day “makes me know that what happens in this part of resistance work and fighting for our freedom, and this continual process of seeing people develop these spaces, that we’re doing exactly what we need to do,” Helm said.

It is a sentiment echoed by Black Lives Matter organisers across the country as they reflect on a year that has brought much pain, but also numerous achievements, and as they chart their priorities moving into 2021.

The Black Lives Matter (BLM) movement was founded by three Black women – Patrisse Cullors, Alicia Garza and Opal Tometi – after the acquittal of the man who shot dead 17-year-old Trayvon Martin in 2013. Since then, #BlackLivesMatter has borne a global network, other organisations and dozens of local BLM chapters across the United States.

Protests under the Black Lives Matter banner have rocked streets in cities big and small. And organisers have sought to “to eradicate white supremacy and build local power to intervene in violence inflicted on Black communities by the state and vigilantes”. 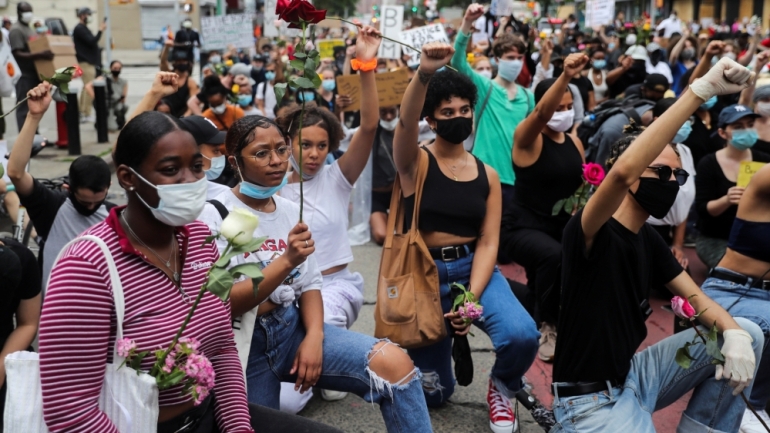 Demonstrators kneel during a protest against the death in Minneapolis police custody of George Floyd, in the Harlem neighbourhood of Manhattan, New York City on June 5 [File: Jeenah Moon/Reuters]Building on the work of previous years, Melina Abdullah, co-founder of Black Lives Matter Los Angeles (BLMLA), the first chapter of BLM, says the group began 2020 thinking it was going to be an opportunity to usher in more transformative change through November’s election. But then, the coronavirus pandemic hit, disproportionately affecting Black communities, and BLMLA knew immediately it had to take action.

“We’ve never been just about ending police violence, but about disrupting state-sanctioned violence against Black people,” Abdullah told Al Jazeera by phone. “One of the big priorities with the COVID-19 pandemic was really this history and legacy of medical racism.”

After initially demanding data that examined how the virus was affecting different communities, BLMLA, along with a coalition of other social justice groups and community leaders, issued the “Black Los Angeles Demands in Light of COVID-19 and Rates of Black Death”, which laid out policy demands for elected leaders. BLMLA also convened a coalition of groups to create the People’s Budget, which called “for investments to ensure Black residents have resources in light of COVID-19”.

Abdullah said that initially, very few elected officials responded to the demands. But then Floyd was killed in Minneapolis, prompting what the organiser called the “resurgence of Black Lives Matter”, and chapters across the US saw more people want to get involved.

“‘Defund the police’ has been a mantra for the last five years, but it really became kind of the clarion call of this moment,” she said. 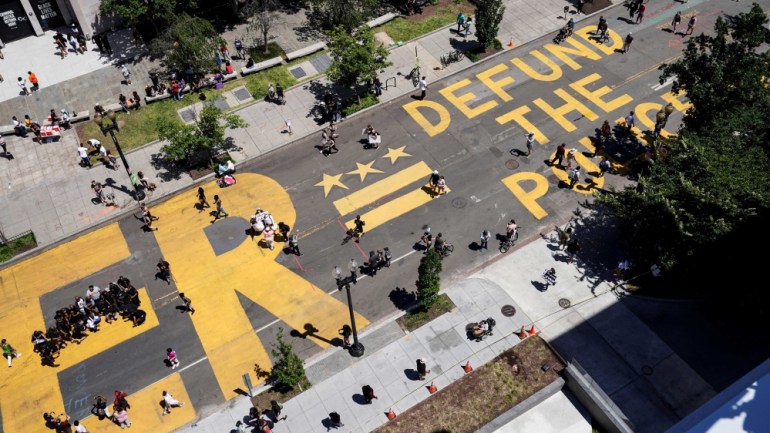 A sign painted by protesters reading ‘Defund the Police’ painted next to a Black Lives Matter sign, near the White House in Washington, DC, US [File: Joshua Roberts/Reuters]The groups have seen successes. The city approved a $150m cut to the Los Angeles Police Department in July.

When US media began to float Mayor Eric Garcetti’s name as a possible contender for Cabinet post in the incoming Biden administration, Black Lives Matter LA launched daily #BlockGarcetti protests outside his home. Garcetti acknowledged earlier this month that he will not serve in the administration.

“What’s really been the priority of 2020 and continues to be our priority as we move into 2021 is really taking advantage of this moment,” Abdullah said. “We didn’t anticipate that everything would change, but as everything’s changing, it’s imperative that we not just kind of tinker around the edges with fundamentally unjust systems, but that we actually take this moment to transform the world in which we live.”

‘We wanted to help empower’

That is the goal of Black Lives Matter in Minnesota, said Trahern Crews, a lead organiser with the state chapter.

When Floyd was killed in Minneapolis in May, the city became the epicentre of summer protests.

One of Crews’s proudest moments was witnessing the solidarity protests that took over hundreds of cities nationwide – and around the world – in the days, weeks and months after Floyd was killed. At the height of the movement in June, tens of thousands of people took to the streets in cities across Latin America, Europe, Australia and Canada to demonstrate against racial injustice. 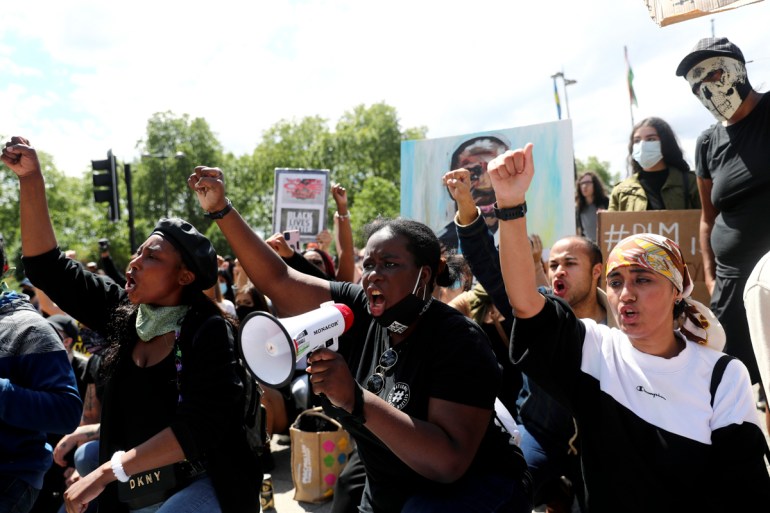 Demonstrators raise their fists during a Black Lives Matter protest in London, UK on June 13 [File: Simon Dawson/Reuters]Analysing data polling regarding the protests in the US at that time, The New York Times concluded that Black Lives Matter may be the biggest movement in the country’s history.

Not only did Minneapolis protesters take to the streets, but the city also saw an outpouring of support for residents and visitors alike. Activists set up food banks and donation centres with clothing, masks, hand sanitiser and other goods.

“A lot of people were suffering, so it was good to see that we were able to help give back,” Crews said.

Amid the protests, the city banned chokeholds and neck restraints like the one used on Floyd. Officers are also now required to try to stop improper force by fellow officers. The state passed similar police reform legislation in July.

Some promises – like a commitment from city leaders to dismantle the Minneapolis police department – have stalled in recent months. But BLM Minnesota and other groups have been able to start or reignite conversations around reparations and economic inclusion for Black communities. 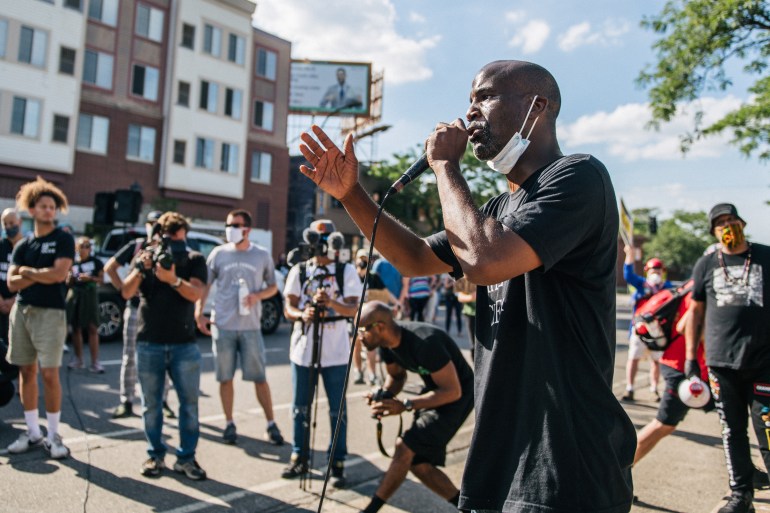 In this file photo from June 25, Trahern Crews speaks during a demonstration in front of the 2nd Precinct Police Station in Minneapolis [File: Brandon Bell/Getty Images/AFP]That will continue to be a priority, Crews says, moving into 2021. He also said BLM Minnesota will seek to hold Joe Biden accountable when he is sworn in as US president on January 20.

The work of Black Lives Matter chapters has been seen in the streets, legislatures and the ballot boxes of other cities across the US. While the “defund the police” call has faced criticism from politicians – liberals and conservatives alike – several cities have made at least modest cuts to their police departments and reallocated some of those funds to community programmes.

Other cities took significant steps in considering reparations for descendants of slaves. California established a task force to make recommendations on reparations. The issue also gained renewed interest at the national level. Confederate symbols and statues came down. Protesters forced businesses, media organisations and other companies to finally recognise and examine institutional racism and develop policies to address it. And many cities enacted police reforms – albeit not at the level many would like. 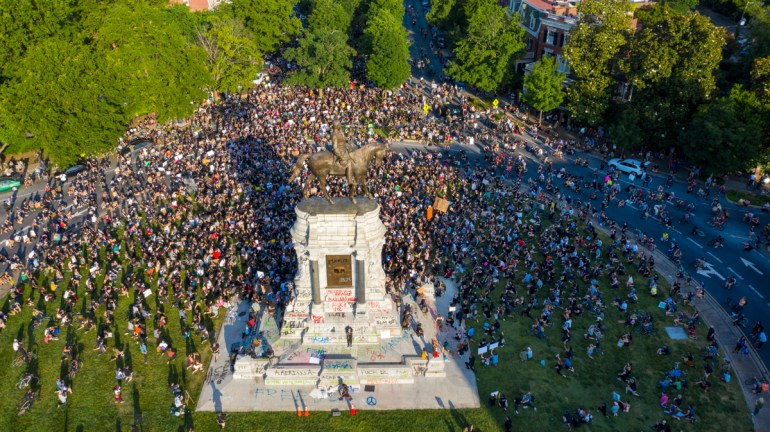 A group of protesters gather around the statue of Confederate General Robert E Lee on Monument Avenue on June 2 in Richmond. The crowd protesting police brutality chanted ‘Tear it down’ [File: Steve Helber/AP Photo]The Black Lives Matter Global Network (BLMGN) also launched a get out the vote effort under #WhatMatters2020. Black voters proved instrumental in Biden’s victory in November.

But with all the successes also came setbacks. Ten local chapters wrote an open letter earlier this month, expressing concern with the global network in how recent decisions were made and money has been allocated. BLMGN did not respond to Al Jazeera’s request for comment.

According to a Pew study, support for Black Lives Matter surged in June at the height of the protests but fell by September, though the majority of Americans (55 percent) still say they strongly or somewhat support the movement. Among Black Americans, however, support has remained strong.

According to Mapping Police Violence, police have killed at least 1,066 people in 2020. More than 28 percent of those killed were Black, despite African Americans making up only 13 percent of the US population.

And Black communities are also still reeling from the effects of the pandemic. 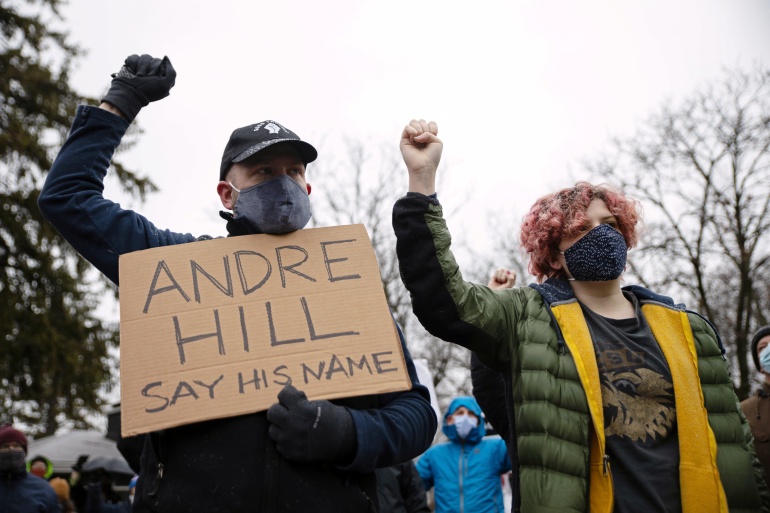 Protesters gather outside the home where Andre Maurice Hill, 47, was killed in Columbus, Ohio, by a police officer in December [Megan Jelinger/Reuters]

That is why Black Lives Matter organisers and others say the protests and work will not stop.

Back in Louisville, Helm says organisers and protesters will continue their work educating residents about the importance of community power. They have seen an outpouring of support, raising millions of dollars for bail funds that have helped support hundreds of protesters facing charges. Black Lives Matter Louisville has also found housing for people in need and built out their operations to better serve the community.

Under pressure, the city leaders agreed to create a civilian review board (though it still needs work, Helm said). They also banned no-knock warrants, but organisers and activists are calling on Kentucky to pass a statewide version of the ban, known as “Breonna’s Law”.

Protesters are also continuing to demand justice for Taylor and her family. This week, the city’s interim police chief reportedly served pre-termination papers to two officers in Taylor’s case: One who sought the warrant and one who fired the bullet that killed the 26-year-old emergency room technician. Another officer has already been fired. But the family demands charges be filed. “Anything less than criminal charges here by a competent prosecutor is unacceptable,” Taylor’s family lawyers said in a statement on Wednesday. 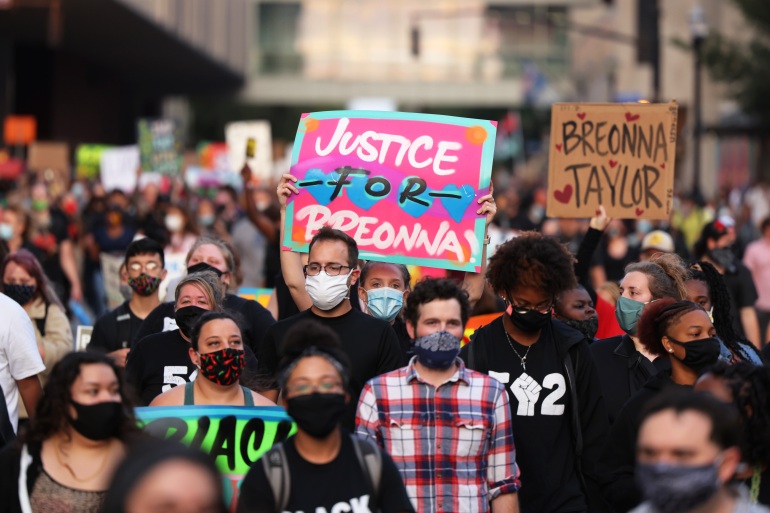 People march on September 26 in the wake of the release of the grand jury report on the death of Breonna Taylor [File: Michael M Santiago/Getty Images/AFP]Black Lives Matter and similar groups will continue to shake Louisville, and the world, Helm and other organisers said.

“We have been abused. The police have come in our home and snatched us from our parents, or snatched our parents or others out of homes. We’ve had to visit family members behind bars. We’ve had to mourn, even this year, the loss of family members murdered by the state or inter-communal violence … but we still do the work,” Helm concluded. “They want to see broken people do some f*****-up s***. But we’re not those types of people. We’re going to f*** up, but we’re going to f*** up in a way that gets us free.”