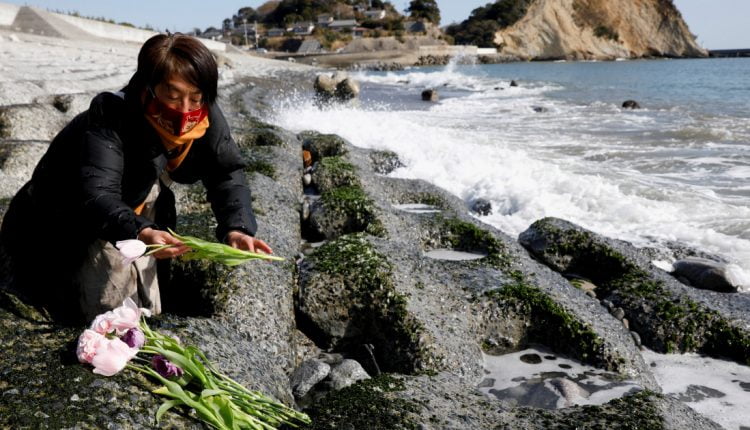 Japan pays tribute to the nearly 20,000 victims of a powerful earthquake and tsunami that hit the northeast of the country 10 years ago, destroying cities and causing the world’s worst nuclear disaster since Chernobyl.

Emperor Naruhito and Prime Minister Yoshihide Suga were due to join a memorial to the dead at a memorial ceremony in Tokyo on Thursday, while several other public and private events were planned in northeast Japan.

The rush of waves triggered by the tremor struck the northeast coast and crippled the Fukushima Daiichi nuclear power plant. More than 160,000 residents were forced to evacuate when radiation streamed into the air.

The disaster has left survivors in Tohoku struggling to overcome the grief of losing families and entire communities to the 50-foot wave.

As the sun rose in Hisanohama city on Thursday, 78-year-old Toshio Kumaki was walking along a huge dam that was built after the tsunami.

“I come here every morning to go for a walk, but this is a special day,” he told AFP as he clenched his hands and prayed toward the rising sun.

About 60 people were killed in Ohisa, one of the districts next to the beach, when the tsunami washed ashore, wiping away everything but a tiny shrine.

Kumaki’s eyes filled with tears as he remembered the disaster. “It was really scary.”

The government has spent around $ 300 billion on rebuilding the tsunami-ravaged region, but the areas around the Fukushima plant remain closed, radiation exposure concerns remain, and many who have left the country have settled settled elsewhere.

The shutdown of the crippled facility will take decades and billions of dollars.

About 50 kilometers south of the plant in Fukushima, in the gritty coastal town of Iwaki, which has since become a hub for workers decommissioning nuclear weapons, restaurant owner Atsushi Niizuma prayed to his mother, who was killed in the tsunami.

“I want to tell my mother that my children, who were all close to her, are fine. I came here to thank her that our family lives safely, “said the 47-year-old to the Reuters news agency.

Before going to work, he prayed quietly at a shrine carved with his mother’s name, Mitsuko, and 65 others who died in the earthquake.

On the day of the disaster, Mitsuko looked after his children. The children stormed into a car. Mitsuko was carried away by the waves when she returned to the house to collect her belongings. It took her body a month to recover.

Local residents are offering prayers for earthquake and tsunami victims on the banks of the Arahama District in Sendai, Miyagi Prefecture, on March 11, 2021 [Jiji Press/ AFP] 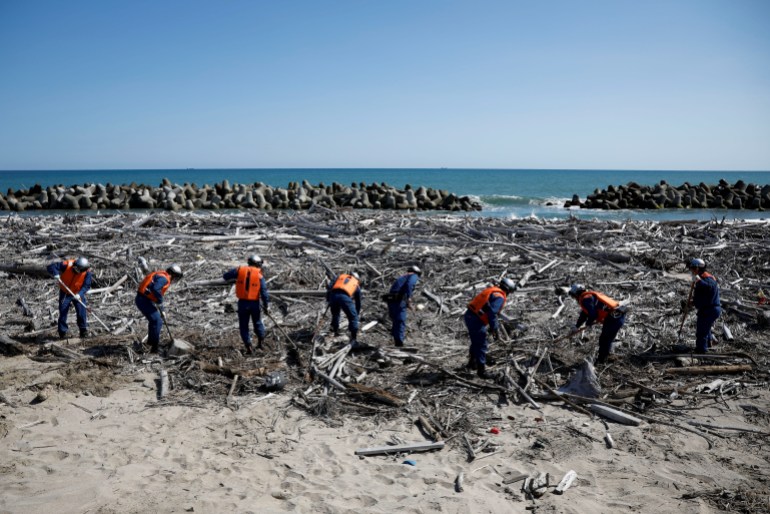 Firefighters search for the remains of people who disappeared after the 2011 earthquake and tsunami in Namie, Fukushima Prefecture, Japan on March 11, 2021 [File: Kim Kyung-Hoon/ Reuters]Honors and condolences also came from around the world, and everyone from the United Nations Secretary Antonio Guterres to the singer Lady Gaga spoke out on the anniversary.

“I would like to express my condolences to those who continue to mourn the loss of their loved ones,” said Guterres, adding that he also “thinks of those who remain displaced and cannot return to their homes for security reasons.”

In that regard, he welcomed the results of a UN report by the United Nations Scientific Committee on the Effects of Nuclear Radiation, published Tuesday, which found that Fukushima residents were not found to have any adverse health effects directly attributed to it exposure to radiation.

Lady Gaga said the resilience of the Japanese people offered hope in the global fight against the coronavirus pandemic.

“Over the years, when I saw and heard the tremendous recovery of your beautiful cities, I have great respect for the people of Japan for their strength, kindness and love for one another,” said the American singer and actress in a video released on became her Twitter account.

“It gives hope to the people battling the COVID pandemic around the world now.”

Antony Blinken, the US Secretary of State, also offered a message of support.

“The United States stands in solidarity with Japan to remember the lost and missing and to recognize the resilience of the Japanese people who have rebuilt their homes, livelihoods and communities,” he said.