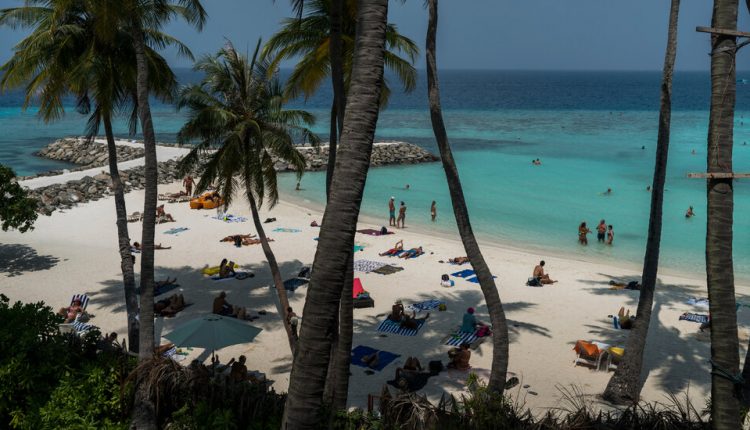 Georgia Steel was jet setting at a time of lockdowns.

Ms. Steel, a digital influencer and reality television star, left England for Dubai in late December, where she was promoting lingerie on Instagram at a luxury hotel. In January, she was at a resort in the Maldives where spa treatments include body wraps made with sweet basil and coconut powder.

“We’re dripping,” Ms. Steel, 22, told her 1.6 million Instagram followers in a post in which she waded through tropical waters in a bikini. It doesn’t matter that the number of Covid-19 cases in the UK and Maldives escalated or that England had just announced its third lockdown.

The Maldives, an island nation off the coast of India, not only tolerate tourists like Ms. Steel, but also encourage them to visit. More than 300,000 have arrived since the country reopened its borders last summer, including several dozen influencers, social media stars with a large fan base who are often paid for hawk products. Many influencers were courted by the government and traveled to exclusive resorts with paid junkets.

The government says its open door strategy is ideal for a tourism-dependent country whose decentralized geography – roughly 1,200 islands in the Indian Ocean – contributes to social distancing. Since the borders were reopened, well under 1 percent of incoming visitors have tested positive for the coronavirus, official data show.

“You never know what will happen tomorrow,” said Thoyyib Mohamed, the executive director of the country’s official PR agency. “But first I have to say, this is a really good case study for the whole world, especially for tropical destinations.”

The Maldives strategy carries epidemiological risks and underscores how distant vacation spots and the influencers they courted have become hotspots for controversy.

As people around the world, some influencers have reported fleeing to small towns or foreign countries and encouraging their followers to do the same that may endanger the locals and others they come in contact with in their travels.

“So we’re just not in a pandemic, are we?” Beverly Cowell, an administrator in England, commented on Ms. Steel’s Instagram post and gave a voice to many who see such travelers as a circumvention of the rules.

Inviting influencers to visit during the pandemic can damage a destination’s image, said Francisco Femenia-Serra, a tourism expert at Nebrija University in Madrid who studies influencer marketing.

“What is wrong with the Maldives campaign is the timing,” he said, noting that it started before travelers could be vaccinated. “It’s turned off. It’s not the time to do that.”

When the Maldives closed its borders in March of last year to protect itself from the virus, it didn’t make the decision lightly: tourism employs more than 60,000 of the country’s 540,000 people, more than any other industry, according to a consultant Nashiya Saeed in the private sector in the Maldives, who recently co-wrote a government study on the economic impact of the pandemic.

“When tourism stopped, there was no income in the country,” said Ms. Saeed. Many laid-off resort workers who live in the capital, Malé, have had to return to their home islands because they could no longer afford it, she added.

While health officials worked to contain local outbreaks, advisors to President Ibrahim Mohamed Solih developed a strategy to resume tourism as soon as possible. One benefit was that most of the country’s luxury resorts are on their own islands, which makes isolation and contact tracing much easier.

“We really planned this, we knew what our advantages were and we played before them,” said Mohamed Mabrook Azeez, spokesman for Mr Solih.

When the Maldives reopened in July, health officials called for PCR testing along with other safety protocols, but did not subject tourists to mandatory quarantines. Around the same time, the country’s PR agency changed its international marketing campaign and urged travelers to “rediscover” the Maldives.

The government and local businesses also invited influencers to stay at resorts and rave about them on social media. What they have done.

“If it’s cloudy, be the sunshine!” Ana Cheri, an American influencer with more than 12 million followers, wrote from a resort in the Maldives in November, a few weeks before her home state of California imposed sweeping bans. “Splash and swing into the weekend!”

Even before the pandemic, influencers faced setbacks when their travels caused offense. For example, some who reported traveling in Saudi Arabia have been criticized for the kingdom’s role in the murder of journalist Jamal Khashoggi.

Influencers from England, in particular, have been criticized in recent weeks for defying the blocking rules that forbid all but essential travel. Some defended their travels, saying that travel was essential to their work, while others apologized under public pressure.

“I said, ‘Oh, well it’s legal so it’s fine,” said influencer KT Franklin in an apology video about her trip to the Maldives. “But it’s not good. It’s really irresponsible and inconsiderate and deaf . “

At the end of January, the UK banned direct flights to and from Dubai in the United Arab Emirates as the Covid-19 case load increased sharply in both locations. The emirate’s lax immigration rules and constant sunshine had made it a popular place for social media. But as the number of cases rose, officials closed bars and pubs for a month and restricted hotels, shopping malls and beach clubs to 70 percent capacity.

Officials in the Maldives, who have welcomed nearly 150,000 tourists so far this year, said they had no plans to introduce similar restrictions.

The country has reported nearly 20,000 coronavirus infections in total, representing about 4 percent of its population, and 60 deaths. But no resort clusters have sparked widespread community broadcast, and officials say the risk of this is small as some resort employees have to be quarantined when traveling between islands.

“All in all, I think we managed to do well,” said Dr. Nazla Rafeeg, chief of communicable disease control at the state health protection agency, although some tourists tested positive before leaving the country. “Our guidelines have withstood the actual implementation.”

Many influencers and celebrities have faced the opprobrium of other social media users stuck at home. Instagram accounts were created to name and shame tourists who apparently violate social distancing and mask-wearing rules abroad.

As a result, some influencers have failed to post travel content – or at least turn off comments on their posts – during the pandemic because they don’t want to bring controversy to court.

The backlash against traveling influencers is exaggerated, said Raidh Shaaz Waleed, whose company got Ms. Steel, Ms. Cheri and more than 30 other influencers to visit the Maldives as part of a campaign called Project FOMO or Fear of Missing Out. None of the invited visitors had tested positive for the corona virus.

“If you think about the safety guidelines, if you are socially distancing yourself, you can still have fun,” he said.

Not everyone shares their optimism.

Ms. Cowell, the administrator in England who commented on Ms. Steel of the Maldives’ post, said in emails that promoting such a trip during England’s third lockdown was irresponsible.

The position is particularly difficult to fill because she appeared on the day she learned that her grandmother, who lives in a nursing home, had contracted the virus.

“It’s not about breaking them off or creating a negative environment online,” Ms. Cowell, 22, said of influencers who break the lockdown rules, “it’s about making sure we don’t put celebrities on a pedestal that makes them invincible feel and can. ” do what you want. “

Taylor Lorenz contributed to the coverage.