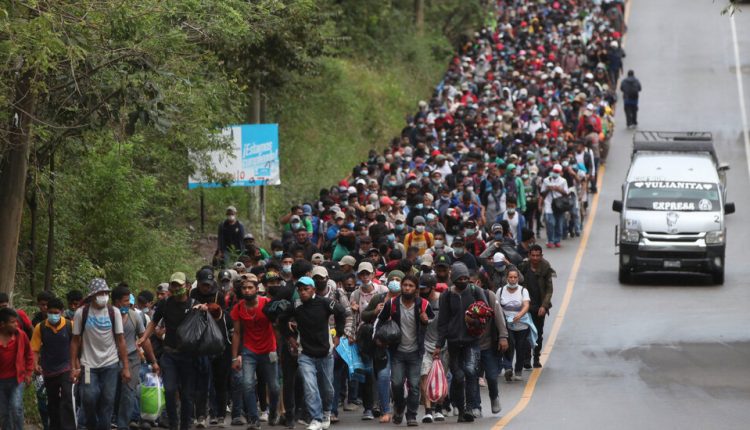 Thousands of migrants from Honduras have entered Guatemala and are planning to travel further north to the United States. This could represent an early test of the immigration policy of President-elect Joseph R. Biden Jr., who has pledged to ease the Trump administration’s asylum restrictions.

After a few hundred people were able to pass the border police on Friday, thousands more followed to Guatemala on Saturday. Officials have said between 7,000 and 9,000 people have entered the country, many of whom are bypassing coronavirus controls.

The government of Guatemala said it “regrets this violation of national sovereignty and calls on Central American governments to take action to avoid putting their residents and the communities they roam through in the face of the pandemic.”

Migrants are expected to continue to encounter obstacles on their way. The Guatemalan authorities set up checkpoints, blocked parts of the caravan not far from their entry into Guatemala and were able to take some of the migrants back home by bus, The Associated Press reported.

Mexican authorities have dispatched additional troops and immigration officers along the country’s southern border in anticipation of the caravan.

“In our national territory we must ensure orderly, safe and regular migration, respecting human rights and humanitarian policies,” said Francisco Garduño Yáñez, head of the National Immigration Institute in Mexico, in a statement on Friday.

Members of the group told reporters they were forced to escape crime, poverty and homelessness exacerbated by the pandemic and two hurricanes late last year.

“We have nothing to feed our children and thousands of us have slept on the street,” said Maria Jesus Paz, mother of four, to Reuters. She said her family lost their homes in the storms and forced her to flee.

“That’s why we make this decision, even though we know the trip could cost us our lives,” she added.

The successive hurricanes that struck Central America in November “devastated livelihoods in a region already facing economic downturn and where the incomes of thousands of families had already plummeted as a result of the pandemic,” according to the International Committee of the Red Cross said on Saturday.

The Trump administration has made a number of agreements with Mexico and Central American countries to prevent migrants from reaching the United States. Mark Morgan, the acting commissioner for customs and border protection, said Saturday that Guatemala is continuing to enforce this agreement.

During the presidential campaign, Mr Biden said he would act quickly to lift the Trump administration’s stricter asylum restrictions, which disqualified people who did not seek refuge on their way to the United States and forced asylum seekers to wait in Mexico.

But last month, in order to stave off a rush on the border, Mr Biden said that such changes could not be made immediately after he took office and that it would take his administration “likely the next six months” to develop more “humane policies” for more the processing of migrants.