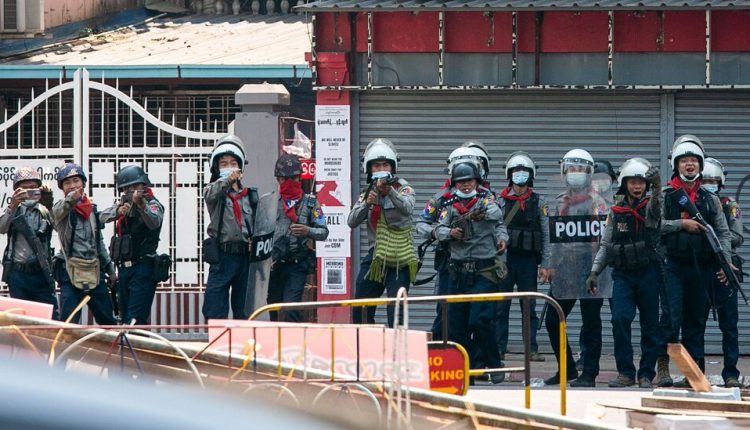 On Sunday, Myanmar authorities began the most violent crackdown to date against protesters who have been gathering on the streets for weeks against the February 1 coup.

The violence against the unarmed and mostly peaceful demonstrators, according to the United Nations Human Rights Office, left 18 dead and more than 30 wounded and took place across the country, including Mandalay in the north, Dawei in the southeast and Yangon in Myanmar’s largest city.

In contrast to previous conflicts in Myanmar, the post-coup operation was “conducted in front of thousands of phones and cameras” to document the violence committed by extreme violence in real time the authorities, said Richard Weir, a previously Myanmar-based researcher with Human Rights Watch.

The New York Times checked dozens of these videos showing both soldiers and police officers using a variety of weapons, including shotguns, lightning strikes, tear gas grenade launchers, and rifles. In at least two episodes we have followed, civilians have been detained with what appeared to be fatal gunshot wounds. Photos also show that at least one of the units involved in the genocide campaign against the Rohingya Muslim minority appears to have been involved in the crackdown.

Here’s what we know from the visual evidence.

A fatal shootout in Yangon

One of the most violent episodes on Sunday occurred in Yangon near Hledan Junction, which has become a regular gathering place for protesters.

At around 8:30 am, the news organization Mizzima TV filmed police officers advancing west on Hledan Road.

You will be seen firing riot cannons and pump-action shotguns that can fire both deadly and less lethal ammunition.

A video from Myanmar-based News Watch shows protesters running towards a high school, fleeing from officials continuing to move towards them.

Amid lightning strikes and gunfire, some of the protesters carry the limp body of someone who appears to be injured.

In a video recorded by local Myanmar Now news agency, another protester lies motionless in front of the high school gate and begins to bleed from his midsection.

Some stop to try to save the wounded man. They carry him away.

Dr. Rohini Haar, a medical advisor with Physicians for Human Rights, reviewed other images of the man’s body for The Times. Dr. Haar said the man’s injury appeared to be consistent with a gunshot wound from live ammunition.

The man who later died was identified by family members as Nyi Nyi Aung Htet Naing. He had posted “#How_Many_Dead_Bodies_UN_Need_To_Take_Action” on his Facebook page the evening before.

Around the same time elsewhere in Yangon, in Yankin Township, the video shows doctors and medical students in their white coats, also protesting peacefully.

Police aim a mix of firearms towards the crowd, including some that appear to be BA-63 rifles that can be loaded with deadly ammunition or empty cartridges to deter the crowd. They also fire a shotgun.

Protesters flee just down the street amid lightning strikes.

Some seek refuge in a side street.

But the officials there drive protesters into a parking lot and load them into police vehicles.

A notorious unit in Mandalay

In Mandalay, Myanmar’s second largest city, a protester was shot in the head through his motorcycle helmet.

U Si Thu, a doctor and protester, told the Times that the man, U Maung Maung Oo, fled from police and soldiers who tried to prevent the demonstrators from gathering. Two other demonstrators were injured, the doctor said.

Graphic videos show civilians trying to rescue the man and get him to an ambulance.

Dr. Haar told the Times that his serious injury could not have been caused by less lethal ammunition such as a rubber bullet since the man was wearing the helmet.

A few blocks away, security forces confronting protesters on Theik Pan Street were filmed as they fired tear gas into the city hospital grounds.

Soldiers photographed a tear gas grenade launcher being fired on the hospital grounds and helped police make arrests. They wore badges that, according to Human Rights Watch’s Weir, were from the 33rd Light Infantry Division of Myanmar.

The 33rd Light Infantry Division previously participated in what the United Nations termed the government’s genocide campaign against the Rohingya Muslim minority.

Shoot into the crowd

In the southern city of Dawei, police opened fire on hundreds of people, witnesses said. At least three people were killed and more than 50 injured, said Dr. Tun Min, who treated the injured in a hospital.

One video shows police officers loading a gun that resembles a BA-63 rifle and then taking turns shooting at it.

Mizzima TV filmed several bodies being rushed to a hospital in the city.

In Myaynigone, a neighborhood in Yangon, another video shows police officers firing pump-action shotguns that can be loaded with deadly or less lethal ammunition. The video was filmed a few hundred feet from another video of protesters gathered in the street before being scattered by tear gas and lightning strikes.

One of the officers, carrying a pouch, appears to be picking up the spent shotgun shells that protesters photographed to prove what ammunition was being used.

According to the Assistance Association for Political Prisoners, an advocacy group based in Thailand and Myanmar, around 30 people have been killed and more than 1,200 arrested since the February 1 coup.

“The streets have become like battle zones,” the association wrote on Monday. “The purpose of all of this was to create fear and compliance with the military.”

The military junta that now rules the country has made it clear that it has no intention of withdrawing, saying that “protesters are now inciting people to a path of confrontation where they will suffer the loss of life”.