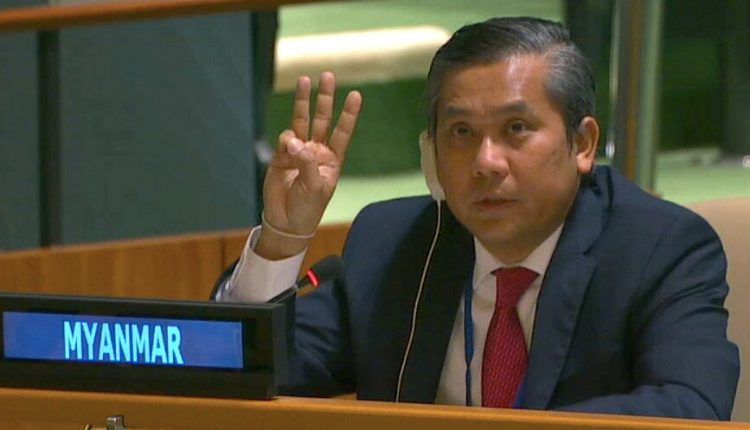 Myanmar Navy Fires U.N. Envoy Who Spoke Towards Its Coup

The ambassador, U Kyaw Moe Tun, ended his speech with a three-finger greeting, a gesture from the films “Hunger Games” that has become a symbol of pro-democratic defiance for protesters in Myanmar and, before that, in neighboring Thailand.

State television announced his dismissal and said he had “betrayed the country and spoken for an unofficial organization that does not represent the country and abuses the power and responsibility of an ambassador”.

Kyaw Moe Tun’s speech supported Myanmar’s pro-democracy movement, which has held daily protests since February 1, when the military took control of the country through a coup d’état, and has expanded into a civil disobedience movement of hundreds of thousands of people go to their jobs.

Mr. Kyaw Moe Tun was appointed under the civilian government, which had shared power with the military prior to the coup, and was outside Myanmar at the time of the coup.

In his speech to the United Nations, he opposed the new military and called on the world organization to “use all means necessary to take action against the Myanmar military” and bring back democracy.

“We need further, strongest possible measures from the international community to end the military coup immediately, stop the repression of the innocent people, return state power to the people and restore democracy,” he said.

He said he was speaking on behalf of the overthrown civilian government led by Daw Aung San Suu Kyi, who has been detained since the morning of the coup.

Before the Ambassador was dismissed, US Secretary of State Antony J. Blinken praised what he described as a “courageous and clear” speech by Mr. Kyaw Moe Tun.

“We must all follow their call to restore democracy in Burma,” he said of the demonstrators, referring to Myanmar by its previous name.

In the past few days, pro-democracy voices like Kyaw Moe Tun have fought with Myanmar’s generals for international recognition.

The junta sent its newly appointed Foreign Minister U Wunna Maung Lwin to Bangkok to meet with Thai Foreign Minister Don Pramudwinai and Indonesian Foreign Minister Retno Marsudi, who is leading the Southeast Asian countries’ efforts to find a peaceful solution to the crisis in Myanmar.

Ms. Retno also met with displaced members of the Myanmar Parliament from the party of Ms. Aung San Suu Kyi, the National League for Democracy, who had fled to Thailand in an attempt to form a government and gain international legitimacy. Ms. Retno called on all sides to exercise restraint and refrain from violence.

But protests again took place across Myanmar on Saturday, including in the northwestern city of Monywa, where hundreds of people were arrested, witnesses said. Police there opened fire on the crowd and wounded two, according to a volunteer paramedic.

In Yangon, the country’s largest city, thousands gathered for demonstrations in various locations. Police used tear gas and smoke grenades to disperse the crowd and chased protesters through the streets, beating and arresting those they caught. Some police officers appeared to target journalists and people who were using their cell phones to video or broadcast the events live.