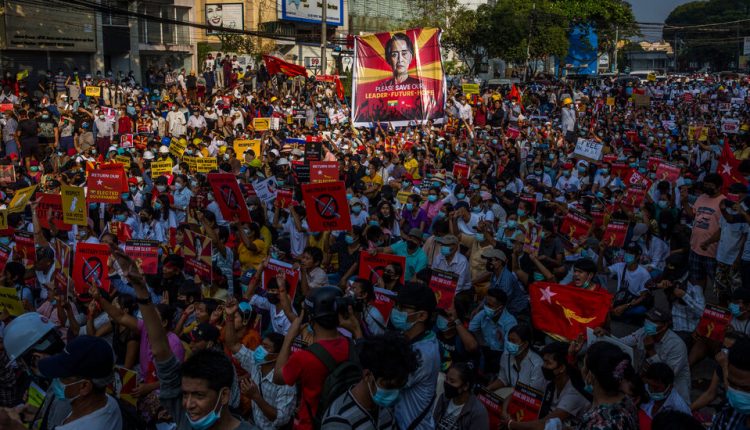 Myanmar’s coup plotters have urged hundreds of thousands of government employees – doctors, garbage collectors, electricity workers – to put aside their “emotions”, give up their protests against the military and return to work.

But on Monday, even after the army took armored vehicles onto the streets in a nightly show of force, workers showed little interest in getting back to work.

The seemingly increasing work stoppages are undermining the ruling generals, who are trying to assert their authority over the people after taking power two weeks ago.

The strikes were particularly noticeable among government employees, including the ministry, which provides power across the country, the tax offices, and the general administration department, which oversees a wide range of public services and government functions.

“There is no way to work under a dictatorship,” said Dr. Kyaw Zin, a surgeon who led one of the country’s first strikes at the government-run Mandalay General Hospital. “I’m pretty sure we can overthrow the regime.”

The Civil Disobedience Movement (CDM) has widespread support across the country. It targets the military’s extensive business interests and government functions essential to military rule, as well as street demonstrations and a noisy new evening ritual that involves beating pots and pans.

On Monday morning, soldiers appeared on the streets of Yangon, Myanmar’s largest city, and Mandalay in place of police officers in prominent locations, including near the headquarters of the Yangon Central Bank.

As a further sign of the military’s efforts to suppress the demonstrators, Internet service was shut down virtually across the country for the second consecutive year early Tuesday. NetBlocks, a UK-based group that monitors internet freedom around the world, said in a Twitter post that the country was “in the midst of an almost complete internet shutdown” as of 1 a.m. in Myanmar.

The military stationed armored vehicles in downtown Yangon overnight, apparently to intimidate the demonstrators. Instead, people put up posters with slogans such as “We don’t want a military government” on the vehicles and posed with them for group photos.

To prevent police from reaching a protest location on Monday, motorists parked their cars on the street and raised the hoods as if to signal that they had engine problems, resulting in a traffic jam.

“We will never go back to work until he resigns,” said Dr. Kyaw Zin, the surgeon who led one of the first strikes. “He has no right to tell us to come to work because nobody recognizes him as a leader. He has to resign. This must be the last coup in Myanmar. We will fight for it. “

The doctor also noted that his patients could visit him in a private hospital for free.

Yangon residents have started throwing their household rubbish into the neighborhood garbage cans after home pick-ups were stopped by the garbage collectors’ strike.

Consumers have also begun boycotting military companies, including the once popular Myanmar Beer and a chain of gold and jewelry stores owned by a member of the military’s new governing body, the State Administration Council.

At the Ministry of Electricity and Energy, the country’s electricity company, about 60 percent of workers have joined the movement and quit their jobs, said U Pyae Sone Ko Ko, a lineman who has stopped working.

A large number of employees are meter readers and if they don’t do their job the ministry cannot send out invoices.

Some ministry workers who have stopped work have been stationed in their offices at night to prevent authorities from turning off the electricity before making nightly raids and arrests.

Other ministry officials have encouraged customers not to pay their bills, finding that the ministry cannot legally turn off their electricity for three months because they haven’t paid.

“We have to take part in the CDM to stop the regime and overthrow the dictatorship,” said Pyae Sone Ko Ko.

Similarly, many workers at private banks have left their jobs in hopes of bringing the regime to its knees by hindering transactions and slowing the economy.

“If we stop working, the business sector will stop working,” said Daw Thandar Kyaw, a bank employee who joined the strike. “Min Aung Hlaing and the military dictators run the economy because they love money. I firmly believe that if all bank employees join the CDM, we can overthrow the dictators. “

In Mandalay, hundreds of protesters gathered in front of the offices of the Myanmar State Economic Bank on Monday afternoon, calling on staff to join the strike. Soldiers and police broke off the protest, chased some demonstrators into nearby houses and beat them.