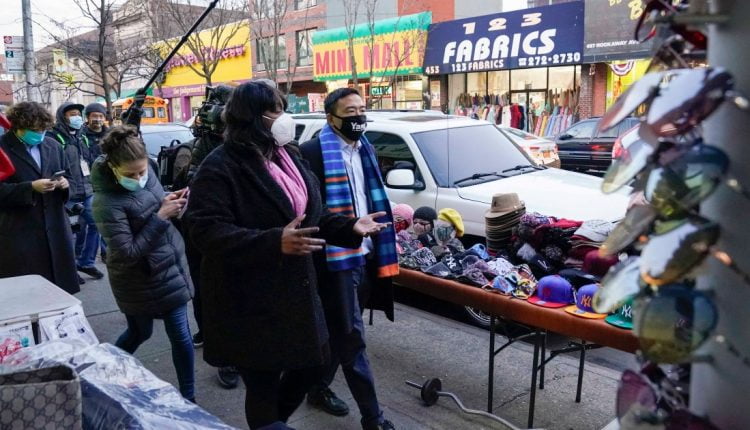 New York is a metropolis of staff | US & Canada Information

When I booked a vaccine appointment online for my father – a key worker and senior with pre-existing medical conditions – I didn’t expect the process to be as tedious as it was. As elders who are not tech-savvy and whose English is imperfect, my immigrant parents have often struggled to navigate the multi-faceted machinery of the city’s health, education, labor, and political bureaucracies without help.

When I booked my dad’s appointment, I realized that there are probably thousands of others like him who may not have someone to do this for them.

It’s hard to believe that the city, widely considered the economic and cultural capital of the country – perhaps the world – would fare so badly at administering the COVID-19 vaccine, especially given how fast it is to get to the epicenter the virus was when the first wave reached the United States.

But this is also the city where excess vaccines are dumped due to lack of coordination, where the mayor and governor have endorsed conflicting guidelines for public gatherings, and where the bodies of those whose lives have been taken by the virus have been dumped in trucks because of the existing infrastructure could not hold them.

With the frenzy of the presidential election out of the way and a new government at the helm, New Yorkers must now grapple with the frenzy of the mayor race in our city. So, given the city’s central location as a cultural engine and economic powerhouse – not to mention home to some of America’s biggest media outlets – mayor’s office is a national discussion.

The entry of former presidential candidate Andrew Yang into the arena, followed by his choreographed performance shopping in an exceptionally large and clean bodega, sparked numerous reactions on Twitter that ridiculed his claims to the city and re-alerted the question of who counts as a “real New Yorker”. But these questions, light-hearted as they are, obscure much more than they reveal. Who dictates the criteria and who is deleted from them?

I was born in Brooklyn in the 1990s and have lived here ever since in a working class immigrant community where you could live for decades without spending much time outside your neighborhood because all you needed and all you knew – the mosque , The school, clinic, supermarket, tech, and retail stores were all within ten blocks.

You had your community uncles who were loving and tough, your hole-in-the-wall shops and restaurants occupied by overworked teenagers providing you with free food, your clumsy kids spending all day … On the stairs, your troublemakers in the neighborhood to avoid, your uninhibited buddy who offered shrewd wisdom to everyone who needed it, your friends whom you can only walk through a single place like the cafe, the park or the mosque knew your religious leader who was both omniscient and omniscient, completely out of contact and so on. Everyone had their right place, as if it were the will of a higher cosmic order.

This wasn’t an anomaly as there were dozens of black and brown churches like mine. But the passage of time has exposed me to the realities of unprecedented changes that come with living in a fast-paced city. In my life, I have witnessed four major tragedies in this city: the September 11, 2001 attacks, the 2008 stock market crash, Hurricane Sandy in 2012 and the COVID-19 pandemic in 2020-2021.

And with each of these crises, many of the above characters who were everyday things eventually stopped going and their lives were changed in a variety of ways. Some were deported by the government in the “war on terror” after September 11th, others became unemployed due to massive layoffs, some were made homeless by the super storm and many lost family members to the virus.

After September 11th, we saw the sharpest spike in anti-Muslim attacks ever seen – only rivaling the Trump era. After the stock market crash, we saw big banks and corporations receive billions in rescue packages. After Hurricane Sandy, we saw the richest counties get power in a matter of days, while many, including my own, were kept off for weeks. And now, with the pandemic looming in the midst of a global uprising for racial justice, we see how unequal “the great balance” really is.

Every city has its own characteristics. New York, perhaps unlike any other city, has its own internationally recognizable quirks. We are the city of hard love and thick skin. We embody a rough, resilient, and determined type of urban culture. And while Yang’s appearance at the Bodega – or the supermarket, as I would call it – was an attempt to demonstrate his own confidence, he was addressing something much bigger about New York that is often forgotten: This is a city with real people, poor and working, black and brown, immigrants and refugees.

To say this sounds clichéd, but even a cursory glance at the media discourse on New York shows that it is just lip service to this essential character of the city. Because of this, the question of whether or not “New York City is dead” has been raised after the city became ground zero of the pandemic in March last year.

Perhaps it can be said that the question was a natural answer to the devastating impact the virus had on the city’s economic life, but when asked it reveals less about the city and more about the question. It wouldn’t cross my mind to anyone in the neighborhood I grew up in. New York City … dead? Why should it be dead? Are we not here yet

In all New York conversations, ordinary New Yorkers are conspicuously obliterated: those of us who grew up in intergenerational households, who attended New York public schools (gasp!), And who were here when the pandemic ravaged our city, and who will be here long after it’s gone And if we really want to make this city a city that represents us all, we have to center the people and voices that are deleted but otherwise always here.

This is not to play a nativist or to find a goalkeeper who can call himself a New Yorker, but rather to hold us accountable for the ideals we want to embody, whether we’ve been two or 20 Years have been here.

How many workers did not get a stimulus package because they were not documented or did not have the resources or ability to file their tax returns? How many are neglected because they couldn’t navigate a Byzantine health bureaucracy to schedule an appointment for a life-saving vaccine?

We should worry less about endless cultural debates about “real New Yorkers” or whether “New York is dead” than about the material conditions of the common people who call New York their home.

New York is not just the glitz and glamor of Times Square or the shows on Broadway or the opinion pages of the New York Times. It’s also the gyro booth worker who serves you a hot chicken over rice in cold weather while barely getting by. It is the taxi driver who makes sure you get to your home safely while dealing with racist passengers and the devastating effects of the gig economy. It’s the postman making sure you get your mail in the middle of a pandemic while his job deals with cuts in funding. It is people like my father whose work was only considered “essential” when the city for which he gave his life and work was struck by a deadly virus.

The pandemic has forever changed public life in the city, forcing us all to rethink issues of inequality, work, urban planning and transportation. Wherever you stand in the cultural debates, let’s all affirm that, if New York is for all of us, it must be first and foremost for its workers. When we talk about New York – our beloved, tormented, and defiant city – let’s make sure we’re talking about a city that is for all of us.

That’s what it’s all about as a New Yorker.

Why Gary Vaynerchuk Loves Working Onerous and Being Underestimated