Rouhani: ‘Insulting the Prophet is insulting all Muslims’ | Center East

In a cabinet meeting on television on Wednesday, the president said freedom must go hand in hand with respect for values ​​and consideration of ethics.

“Westerners need to understand that the great prophet of Islam is loved by all Muslims and freedom-lovers in the world,” said Rouhani.

The Prophet is deeply venerated by Muslims and any kind of visual representation of him is forbidden in Islam. The French cartoons in question are viewed by Muslims as offensive and Islamophobic because they associate Islam with terrorism.

The images are regularly published by the French satirical magazine Charlie Hebdo. Six years ago they were cited as the cause of a fatal attack launched in early 2015 by two al-Qaeda-affiliated fighters on the magazine’s offices.

On October 16 of that year, French teacher Samuel Paty was murdered in broad daylight near his school in a suburb of Paris after showing his students the cartoons during a discussion on freedom of expression.

Muslim leaders expressed their condolences and support to France after the murder. However, since then there have been growing concerns that Muslim communities in France could be collectively punished if authorities publicized their reaction to Paty’s murder.

French and European leaders have spoken out in favor of the right to display the cartoons, citing freedom of expression.

“We will never give in,” Macron wrote on Sunday evening in a series of tweets in French, Arabic and English. “We respect all differences in the spirit of peace. We do not accept hate speech and defend reasonable debates. We will always be on the idea of ​​human dignity and universal values. “

This support, as well as the comments of French President Emmanuel Macron, who said on October 2nd that Islam was in “crisis”, has sparked a backlash from Muslims around the world.

Iran’s religious leaders have not called for a boycott of French goods. Ayatollah Sadeq Amoli Larijani, chairman of the influential Expediency Council, welcomed the support of other Muslim countries for a ban on French products on Tuesday.

“It was a very good move and we hope others will go down that path,” he said.

On Tuesday, the Iranian Foreign Ministry called on the French Chargé d’Affaires to protest Macron’s statements and support for the right to continue showing the cartoons.

Public protests and student protests are expected to take place outside the French embassy on Neauphle-le-Chateau Street in Tehran on Wednesday and will include public prayers and speeches by clergymen.

“Europeans have drawn a number of red lines on freedom of expression, including the Holocaust,” Marandi told Al Jazeera.

“But they not only insult what other people consider sacred, in this case those of nearly two billion Muslims, they also support and spread it.”

In the past few days, figures and groups from across Iran’s political spectrum have come together to denounce the French and European stance.

Iranian Foreign Minister Mohammad Javad Zarif said on Monday that Muslims are “the main victims of the” cult of hate “- fortified by colonial regimes and exported by their own customers” and insulted all Muslims for the crimes of “such extremists … only fuels” extremism “.

Muslims are the main victims of the “cult of hate” fueled by colonial regimes and exported by their own customers.

1.9B Offending Muslims – and their Holiness – for the heinous crimes of such extremists is an opportunist abuse of freedom of expression.

Other officials, including the Secretary of the Supreme National Security Council of Iran, the Speaker of Parliament and the Advisor to the Supreme Leader, slammed Macron, who they said was pursuing “stupid enmity” with Prophet Muhammad, partly due to “his lack of experience “Is due in politics”.

On Monday, 240 members of the Iranian parliament, with a conservative majority, issued a joint statement against the French stance they described as “anti-human”, adding that the French president’s “audacity and arrogance” had nothing to do with freedom of expression and expression was part of a larger plan against Islam and the Muslims.

The Iranian army said in a statement on Tuesday: “Those who claim to stand up for human rights are generalizing the actions of one … to all of Islam.”

A number of Iranian media and newspapers have also dedicated their front pages to the controversy.

The conservative daily Vatan-e-Emrooz showed a Macron with a red face as a devil: “Iblis of Paris” was the headline.

The Keyhan daily published an editorial calling for the French ambassador’s expulsion as “the slightest reaction to Macron’s profanity”.

In recent years she has repeatedly called for the French ambassador to be expelled in order to respond to controversies in Europe about Iran and the Muslims. 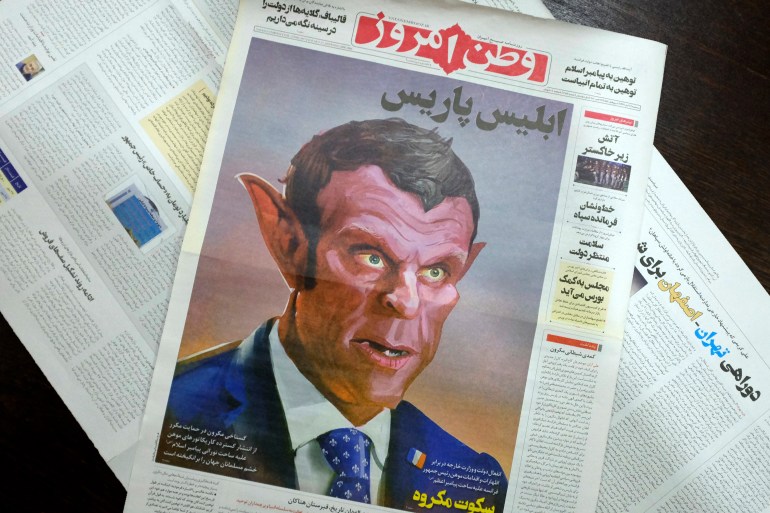 The cover of the October 27, 2020 issue of Vatan-e-Emrooz shows Macron as the devil [Vahid Salemi/AP]