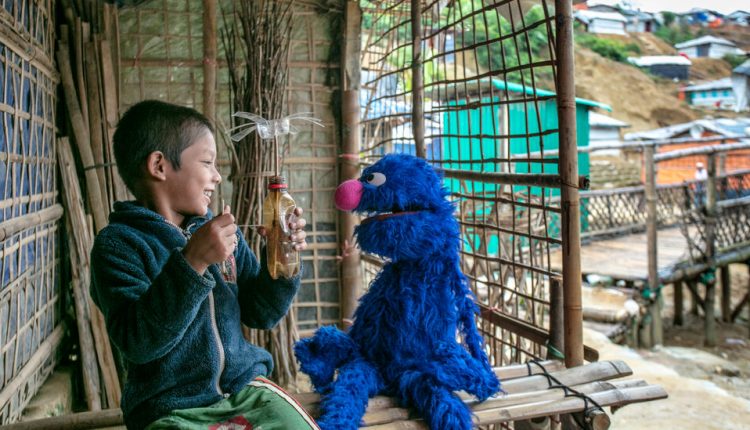 BANGKOK – Six-year-old twins Noor and Aziz live in the largest refugee camp in the world. They are Rohingya Muslims who escaped ethnic cleansing in their home country, Myanmar, to seek refuge in neighboring Bangladesh. They are also muppets.

On Thursday, Sesame Workshop, the nonprofit that runs the early education TV show Sesame Street and operates in more than 150 countries, revealed Aziz and Noor as the newest muppets to join their cast.

The twins will perform with Elmo and other famous muppets in educational programs about math, science, health and other topics shown in the camps.

They will speak Rohingya, the language of a group of people who the Myanmar authorities have not recognized as a legitimate ethnicity. Elements of the sesame workshop curriculum are dubbed in Rohingya.

“They are among the most marginalized children in the world,” said Sherrie Weston, president of the Sesame Workshop Social Impact, who traveled to Rohingya refugee camps several times to formulate the characters and stories of the Muppets. “For most Rohingya children, this will be the first time characters in the media look and sound like them and truly reflect their rich culture.”

More than half of the residents of the Rohingya refugee settlements in Bangladesh are children. Many suffered trauma after security forces in Myanmar evicted them from their villages, murdered some of their fathers and raped their mothers.

A survey by Doctors Without Borders, released in 2017 after a brutal campaign that forced more than 750,000 Rohingya to flee the country within a few months, found that at least 730 children under five were killed in late August through late September this year.

The legacy of violence continues in Bangladesh and has made it into the history of the muppets. Noor, one of the Muppet twins, is afraid of loud noises, just like many Rohingya children today, as shots can be heard in their memories.

The Sesame Workshop has long been committed to diversity and social justice. Muppets and their young playmates on Sesame Street had autism, HIV, and Down’s syndrome. They were homeless and faced the stigma of having an imprisoned parent. An Afghan muppet exemplified the importance of raising girls.

Noor and Aziz, as conceived by Sesame Workshop, are playful and get along well. Aziz, a boy, helps the family with household chores and is rooted in the Rohingya tradition of storytelling. Noor, a girl, is confident and loves to learn. The program chose to specifically portray them as twins so that as a girl and boy they could play together in ways that other siblings in this traditional Muslim community may not be able to do so easily.

“By modeling girls and boys as equals and having characters who love to learn, it is important that we not only inspire young girls and give them a sense of opportunity that they may not have, but that we show little boys that Girls can have equal roles and responsibilities, ”said Ms. Weston.

The program shows the Rohingya Muppets living in a huge tangle of tented shelters, crowded with more than a million mostly stateless people with little hope of returning to Myanmar. United Nations officials have suggested that their exodus bears the marks of genocide.

Life in the Rohingya refugee camps can be far harder than the background stories of Noor and Aziz suggest. Girls, who are often kept out of school, usually marry before they reach adulthood to ease the financial burden on their families. That year hundreds of Rohingya girls spent months at sea in overloaded fishing vessels on their way to Malaysia, where they had been promised child brides by undocumented Rohingya men. Dozens died during the trip.

On Friday, Ajmat Ara, 8, in Kutupalong, the largest of the Rohingya refugee camps in Bangladesh, shook her head when asked if she knew about a furry collection of characters called the Muppets. Unlike many girls, she is lucky and attends a school run by an educational institution.

“We’re learning English and Burmese at school,” she said before running off to play.