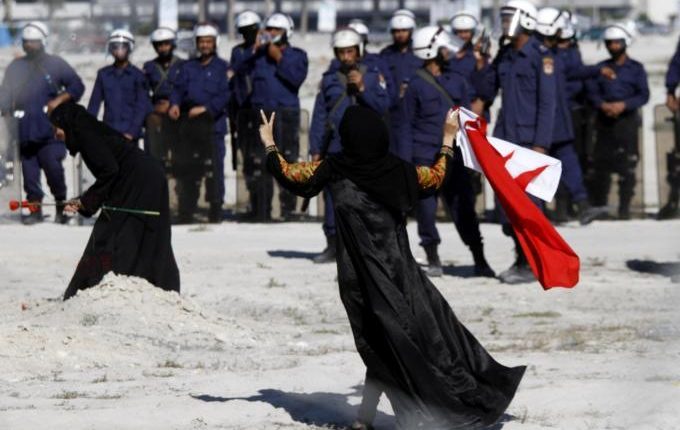 Small and sporadic demonstrations took place on Sunday in Bahrain amid a heavy police presence. This was 10 years after the Arab Spring-inspired uprising of the Gulf nation.

On February 14, 2011, tens of thousands took to the streets to call for an elected government and other reforms that briefly threatened the monarchy’s takeover before a lethal crackdown ensued.

The protests were mainly attended by the country’s majority Shiite residents, who the Al Khalifa monarchy had long accused of political persecution.

However, the movement was crushed weeks later after the ruling family brought in troops from neighboring Gulf states. The iconic Pearl Roundabout memorial – the epicenter of the protests – has been demolished.

To commemorate these events, activists posted pictures of small demonstrations on their social media accounts on the outskirts of the capital Manama on Sunday.

Some waved Bahraini flags while others held banners against the Al Khalifa family.

From Saturday evening, marches had been organized in Shiite majority quarters near Manama and in the north and west of the country.

However, the number of demonstrators was limited compared to previous years due to strict security precautions and strict measures to contain the spread of the coronavirus.

Social media users spread the hashtag in Arabic “Perseverance to Victory” and exchanged photos of protests from villages like al-Shakhoura and al-Diyya. The pictures published online showed a close police presence in the capital and in other Shiite villages.

Translation: Bahraini march in the villages of Abu Saiba and Shakhoura for rallies marking the 10th anniversary of the start of the revolution on February 14th.

“Because of Bahrain’s geopolitical importance [located] between Saudi Arabia and Iran and hosts the [US Navy] Fifth fleet and now too [hosting] As a base for the UK, there are many interests based in Bahrain, ”she said.

“When we took to the streets in 2011, we knew that we were not only facing the Bahraini government, but the six GCC countries and their allies – the UK and the United States.”

The 2011 uprising, inspired by the revolutions in Tunisia and Egypt, ended in bloody crackdown with the help of the Saudi and Emirati armed forces.

Dozens are believed to have been killed in the riot, although the exact number remains unclear.

Today, on the occasion of #ValentinesDay, we celebrate the 10th anniversary of the # Bahrain uprising for rights, freedom and dignity.
And when we were ten years old, my family marks 3,599 days since my father was knocked unconscious and taken away and is still serving a life sentence today # DKPol

The government denounced the protest movement as a conspiracy by the regional Shiite power Iran.

“Ten years after Bahrain’s popular uprising, systemic injustice has deepened and political repression has closed virtually all space to … freedom of expression,” Amnesty International said in a statement.

Protests began 10 years ago in #Bahrain, where the government used excessive force and dangerous mass control weapons that threatened the lives and human rights of civilian protesters.

We still see that this is the case in too many countries today – Myanmar and the United States, for example. pic.twitter.com/Wq7QWRTasS

Ibrahim Fraihat, a professor at the Doha Institute for Graduate Studies, said there were three reasons the Bahrain uprising was put down.

“For one thing, the early revolution was crushed by Operation Peninsula Shield [the GCC’s military arm] sent from Saudi Arabia, ”he told Al Jazeera.

“Second, Bahrain is linked to a regional conflict with Iran and Saudi Arabia. Because of this, the protesters in Bahrain received no outside support. And the third reason seems to be that royal political systems appear to be more resilient and stronger to protests than republican political systems. “