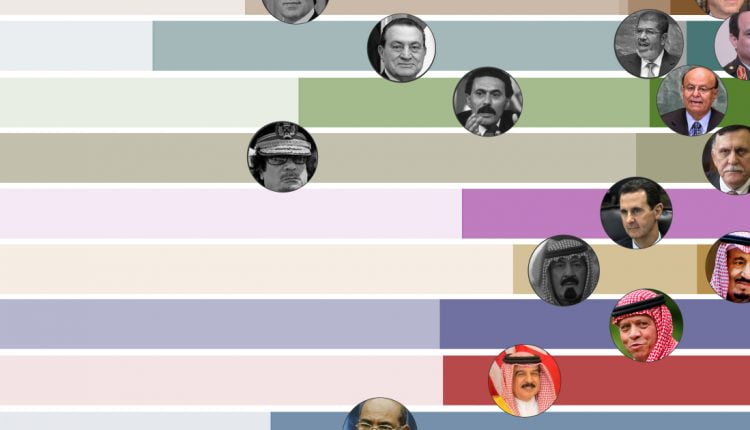 Timeline: How the Arab Spring unfolded 10 years in the past | Arab Spring: 10 years on Information

What began as a protest by Mohamed Bouazizi – a fruit vendor who set himself on fire – the month before, sparked the period of unrest that unseated Ben Ali.

Protests and uprising were then witnessed across the region.

Al Jazeera takes a look at the turn of events that changed the course of history.

December 17: Jobless graduate Bouazizi died after setting himself on fire when police refused to let him operate his cart. The self-immolation, following WikiLeaks’s publication of US criticism of the government, provokes young Tunisians to protest.

December 29: After 10 days of demonstrations, President Ben Ali appears on television promising action on job creation, declaring the law will be very firm on protesters.

January 14: Ben Ali finally bows to the protests and flees to Saudi Arabia.

January 17: Tunisia’s Prime Minister Mohamed Ghannouchi announces the formation of an interim unity government that includes figures from the previous government. But protesters throng the streets to reject it.

March 9: Tunisian court rules the party of former President Ben Ali will be dissolved. The news is followed by street celebrations.

January 14: Celebrations are witnessed in the capital to mark one year since the overthrow of Ben Ali.

January 16: Protests erupt in Benghazi after the arrest of human rights activists.

February 25: As uprising reaches the heart of Tripoli, protests erupt across the Middle East.

March 9: Gaddafi warns the imposition of a no-fly zone in Libyan airspace will be met with armed resistance.

March 23: Britain, France and the US agree NATO will take military command of Libya’s no-fly zone.

April 15: US President Barrack Obama commits to military action until Gaddafi is removed.

May 1: The British embassy in Tripoli is set on fire and other Western missions ransacked in retaliation to NATO’s air raid.

August 26: In its first Tripoli news conference, the National Transitional Council says its cabinet will move from Benghazi to the capital.

September 8: While in hiding, Gaddafi issues a defiant message promising never to leave “the land of his ancestors”.

September 25: A mass grave containing 1,270 bodies is discovered in Tripoli.

October 20:  Cornered by rebel forces and pinned down by NATO air raids, Gaddafi is found hiding and killed.

October 25: Gaddafi’s burial alongside his son ends the controversy over the public displaying of his body.

November 19: Celebrations as Gaddafi’s fugitive son Saif is arrested while attempting to flee to Niger.

November 20:  All leading figures from the Gaddafi regime are killed, captured or driven into exile.

January 17: A man sets fire to himself next to the Parliament building in Cairo to protest the country’s economic conditions.

January 25: The first coordinated demonstrations turn Cairo into a war zone as protesters demand the removal of President Hosni Mubarak.

January 28: After four days of protests and 25 deaths, Mubarak makes his first TV appearance, pledging his commitment to democracy. He sacks his government but refuses to step down.

January 31: The army declares itself allied to the protesters.

February 1: Mubarak declares he will not run in the next election but will oversee the transition.

February 11: Mubarak resigns and hands power to the military.

February 13: The military rejects protesters’ demands for a swift transfer of power to a civilian administration.

September 27: The military regime announces parliamentary elections since Mubarak was overthrown. Protesters fear remnants of the old regime will stay in power.

October 6: Supreme Council of the Armed Forces unveil plans that could see it retain power until 2013.

November 13: Violence escalates as protests against the governing military government spread beyond Cairo and Alexandria.

November 21: The interim government bows to growing pressure as violence leaves 33 dead and more than 2,000 injured.

November 29: Egyptians vote in record numbers in the country’s first free ballot for more than 80 years.

November 30: The Muslim Brotherhood’s Freedom and Justice Party looks on course to be the biggest winner after the first round of voting.

December 5: Egyptians go to the polls once more in runoff elections for parliamentary seats as no party gained more than 50 percent of the votes.

December 7: A new government is sworn in by Kamal Ganzouri, who was appointed prime minister by the military rulers.

May 23-24: Egyptians vote in the first round of the presidential election with Ahmed Shafik and Mohammed Morsi in the lead.

June 2: Former President Mubarak sentenced to life in prison by an Egyptian court.

February 4: Several hundred Bahrainis gather in front of the Egyptian embassy in the capital Manama to express solidarity with anti-government protesters there.

February 14: “Day of Rage”: An estimated 6,000 people participate in demonstrations. Their demands include constitutional and political reform and socioeconomic justice.

February 17: “Bloody Thursday”: At about 3am local time, police clear the Pearl Roundabout of an estimated 1,500 people in tents. Three people are killed and more than 200 injured during the raid.

February 26: The king dismisses several ministers in an apparent move to appease the opposition.

March 18: The Pearl Monument – the focal point of the protest movement – is demolished.

September 25: King Abdullah announces cautious reforms, including the right for women to vote and stand for election from 2015.

March 8: More than 2,000 inmates stage a revolt at a prison in the capital Sanaa and join calls by anti-government protesters for Saleh to step down.

March 10: Saleh’s pledge to create a parliamentary system of government is rejected by the opposition.

June 3: President Saleh survives an assassination attempt in which he is severely wounded.

September 23: Saleh returns unexpectedly after three months of recovering in Saudi Arabia. He calls for a truce after five days of violence in Sanaa in which 100 protesters are killed.

September 25: Saleh calls for early elections in his first speech after returning to Yemen.

November 23: Agreement for an immediate transfer of power pledges immunity for Saleh and his family.

December 1: The political opposition and Saleh’s party agree to the makeup of an interim government.

March 15: Major unrest begins when protesters march in Damascus and Aleppo, demanding democratic reforms and the release of political prisoners. Rallies were triggered by the arrest of a teenage boy and his friends a few days earlier in the city of Deraa for graffiti denouncing President Bashar al-Assad.

April 9: Anti-government demonstrations spread across Syria. At least 22 are killed in Deraa.

April 25: Tanks are deployed for the first time.

July 25: The cabinet backs a draft law to allow rival political parties for the first time in decades.

January 10: In a televised speech, President al-Assad says he will not stand down and promises to attack “terrorists” with an iron fist.

February 3: The Syrian government launches an attack on the city of Homs.

April 16: The first truce in the battle of Aleppo is declared.

November 24: Putin calls Turkey “accomplices of terrorists” and warns of “serious consequences” after a Turkish F-16 jet shoots down a Russian warplane.

March 2016
March 14: Putin announces the withdrawal of the majority of Russian troops from Syria, saying the intervention has largely achieved its objective.

March 24: About 500 protesters set up camp in the main square in the capital Amman.

October 7: Protests start again when former Prime Minister Ahmad Obeidat leads about 2,000 people in a march outside the Grand Husseini Mosque in central Amman. There were also marches in the cities of Karka, Tafileh, Maan, Jerash and Salt.

November 13: Protests erupt nationwide in response to an increase in fuel prices and other basic goods announced by Prime Minister Abdullah Ensour.

December 19: Hundreds protest in the northern city of Atbara against soaring bread prices. Demonstrations spurred by a broader economic crisis spread to Khartoum and other major cities.

June 3: Security forces raid a sit-in protest outside the defence ministry in Khartoum. Crowds flee in panic. In the days that follow, opposition-linked medics say more than 100 people were killed in the assault.

June 16: Al-Bashir appears in public for the first time since his overthrow as he is taken from prison to be charged with corruption-related offences. He has already been charged with incitement and involvement in the killing of protesters.

July 5: A military council and a coalition of opposition groups agree to share power for three years after mediation by Ethiopia and pressure from the African Union and world powers.

July 17: A political accord is signed that defines the transition’s institutions. Differences remain over the wording of a constitutional declaration.

July 29: At least four children and one adult are shot dead when security forces break up a student protest against fuel and bread shortages in the city of El-Obeid.