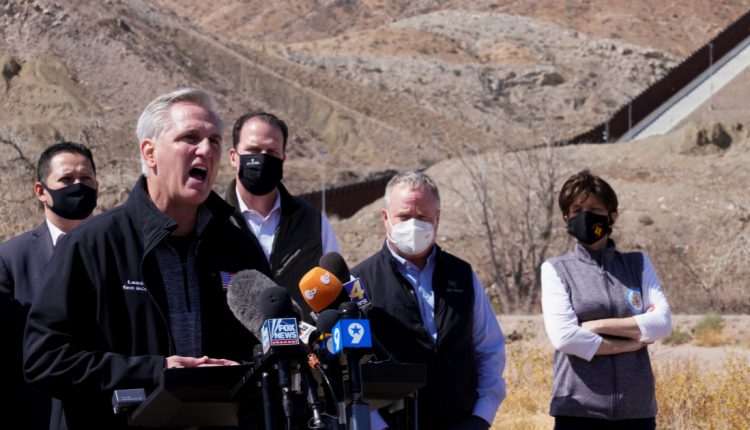 The US Republicans are taking advantage of an increase in the number of children attempting to enter the US via the southwestern border with Mexico to attack the Biden administration as a new crisis develops in the US border fortifications.

“The security of our nation and our border is primarily the responsibility of our President,” McCarthy said at a press conference near El Paso, Texas, pointing to an increase in border crossings since the election of President Joe Biden.

“This crisis is caused by the presidential policy of this new administration. There is no other way to claim this than a Biden border crisis, ”McCarthy said.

“It’s more than a crisis. It’s human heartbreak, ”he said.

The U.S. Customs and Border Protection (CBP) released statistics last week showing agents intercepted more than 100,000 people trying to cross the U.S. southwest border in February. This corresponds to an increase of 28 percent compared to January. Many are children and families planning to travel to the United States.

More than 3,600 children are being held in border detention centers.

The Associated Press reported Friday that hundreds of children and teenagers were packed into a border patrol tent in Texas. Lawyers overseeing the detention centers told the news agency that some slept on the floor while others were unable to shower for five days.

The AP reported Monday that US federal agencies are considering moving up to 3,000 teenagers to a convention center in Dallas.

According to CBP, the increase in the number of migrants trying to enter the US, especially unaccompanied children, began in April 2020 due to gang violence, natural disasters, hunger and poverty in Guatemala, Honduras and El Salvador.

While many of the adults arrested trying to cross the border without papers are deported, U.S. law requires unaccompanied children to be looked after and placed in makeshift homes.

Yaretsi, a four-year-old girl from Honduras, sits on her mother Angie’s lap and looks out the window of a US Border Patrol vehicle after entering the US from Mexico on March 15 [Adrees Latif/Reuters]The Biden administration asked the Federal Emergency Management Agency (FEMA) over the weekend to help build emergency shelters.

“It’s undoubtedly a complicated problem,” White House press secretary Jen Psaki said Monday when she was pressed by reporters to challenge the Biden government at the border.

“We are sending the message clearly in the region: ‘Now is not the time to come. ‘But we also want to ensure that people who are children who are unaccompanied children are treated with humanity. That’s who we are as a country, and that’s why we do both, ”said Psaki.

Rebecca Hamlin, professor of law and politics at the University of Massachusetts and author of an upcoming book on migration policy, said Republican grievances are “nakedly partisan” and should motivate the “Republican grassroots”.

The previous Trump administration forced all asylum seekers in the US to stay in Mexico, creating “one of the most dangerous, unsanitary and overcrowded poor quality refugee camps in the world,” Hamlin told Al Jazeera.

“We kept the border crisis on the other side of the border,” she said.

The only way to really solve this problem now is to invest more resources in processing people who cross the line, and the Biden administration has not yet asked Congress for the necessary funds.

“It’s a difficult political situation for them,” said Michael Jones-Correa, professor at the University of Pennsylvania Center for Ethnicity, Race and Immigration.

“Given the history of children in cages during the Trump administration, the Biden administration clearly does not want to repeat that,” Jones-Correa told Al Jazeera.

“It’s not the political situation that the Biden government wanted to be in,” he said.

Gavin Newsom, Going through Potential Recall, Will get Help From Kamala Harris – .