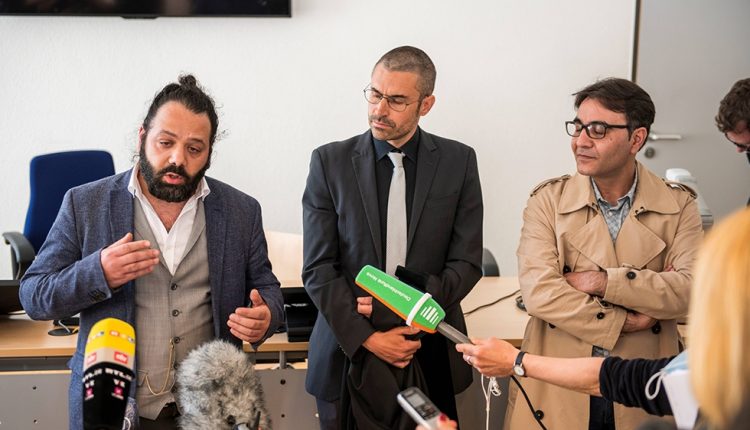 On Wednesday, a German court will deliver a historic verdict on state-sponsored torture by the government of Syrian President Bashar al-Assad in the first trial worldwide.

Almost ten years since the Arab Spring hit Syria on March 15, 2011, the ruling will be the first in the world to refer to the government’s brutal repression of demonstrators in Damascus.

Eyad al-Gharib, 44, is accused of being an accomplice in crimes against humanity as a low-ranking member of the secret service.

The Syrian defendant Eyad al-Gharib comes to court in Koblenz, West Germany, for an unprecedented trial for state-sponsored torture in Syria [File: Thomas Lohnes/AFP]The former colonel reportedly helped arrest at least 30 demonstrators and took them to the al-Khatib detention center in Damascus after a rally in the Duma northeast of the capital in autumn 2011.

Gharib will be the first of two defendants since April 23 to be convicted by the Koblenz court after the judges decided to split the trial in two.

The second defendant, Anwar Raslan, 58, is charged directly with crimes against humanity, including supervising the murder of 58 people and torturing 4,000 others.

Raslan’s trial is expected to last at least until the end of October.

The two men will be tried under the principle of universal jurisdiction, which enables a foreign country to prosecute crimes against humanity, including war crimes and genocide, regardless of where they were committed.

Other cases of this kind have also occurred in Germany, France and Sweden as Syrians who have sought refuge in Europe are using the only legal remedies currently available to them due to paralysis in the international justice system.

The public prosecutor’s office in Koblenz is aiming for five and a half years for Gharib, who defected in 2012, before finally fleeing Syria in February 2013.

After spending time in Turkey and then Greece, Gharib arrived in Germany on April 25, 2018.

He never denied his past, and in fact, it was his stories that were told to the German authorities responsible for his asylum application that ultimately led to his arrest in February 2019.

The prosecution accused him of being a cog in the machine of a system that practiced torture on an “almost industrial scale”.

During the ten-month hearings, the main focus of attention was on Raslan. Gharib was silent and hid his face from the cameras. He wrote a letter read by his lawyers expressing his grief for the victims.

And with tears on his face, he listened as his lawyers demand his acquittal, arguing that he and his family could have been killed had he not carried out the regime’s orders.

His defense also said he lived in fear of his superior, Hafez Makhlouf, a cousin and close associate of Assad who was notorious for his brutality.

But Patrick Kroker, an attorney who represents the joint plaintiffs, argued that Gharib could have been more open during the trial rather than remaining silent during the hearings.

People like him can be very important in letting us know about this [Syrian officials] We really aim, but he chose not to, ”said Kroker.

During the trial, more than a dozen Syrian men and women stood up to testify about the appalling abuse they had suffered in al-Khatib Detention Center, also known as Branch 251.

Some witnesses were heard anonymously, their faces hidden or wigs worn, for fear of reprisals against their relatives still living in Syria.

The trial was also the first time that photos from the so-called Caesar files were presented in court.

The 50,000 pictures of the defector of the Syrian military police “Caesar” show the bodies of 6,786 Syrians who were starved to death or tortured to death in the prisons of the Assad government.

They were examined during the trial by forensic scientist Markus Rothschild, whose analysis was viewed as overwhelming material evidence.

Last year, the New York Times published a report on how the Syrian government operated a network of secret torture facilities across Syria during the civil war.

The exact number of civilians detained in these prisons is unknown, but according to the Syrian Human Rights Network, around 128,000 Syrians are considered either detained or dead.

Although the Syrian government has denied systematic abuse, it has recently recognized the deaths of hundreds in detention by issuing death certificates or listing them as “dead” on family registration files.

Today nearly six million Syrian refugees fled the war in Syria. Even if the war ends, many fear persecution upon their return and have expressed the need for a safe return process sponsored by the United Nations.

The ongoing trial has inspired Syrian activists and NGOs across Europe to induce their federal prosecutors to issue international arrest warrants against senior members of the Syrian government.

Do you need to affect with tales? Select good metaphors