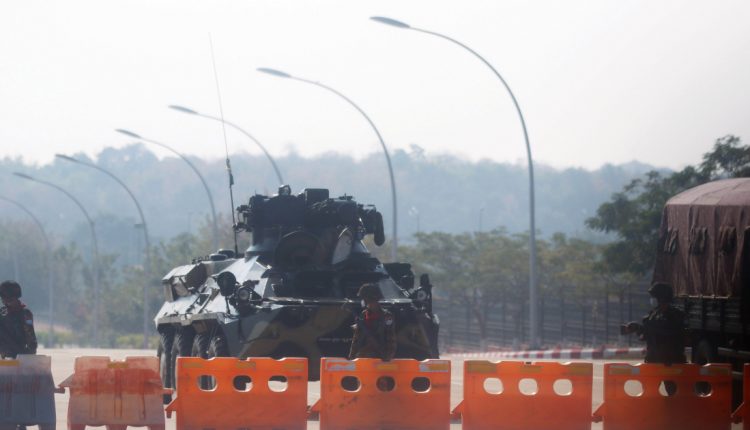 US President Joe Biden threatened sanctions against Myanmar following a coup by the country’s military leaders on Monday and called for a concerted international response to urge them to hand over power.

Biden denounced Monday’s takeover of the military from the civilian-led government and the imprisonment of the country’s elected leader, Aung San Suu Kyi, as a “direct attack on the country’s transition to democracy and the rule of law”.

The coup also brought a rare political alignment between Biden’s Democrats and top Republicans as they denounced the military takeover and demanded consequences.

“The international community should come together with one voice to urge the Burmese military to immediately abandon the power they have seized and release the activists and officials they have arrested,” Biden said in a statement.

“The United States has lifted sanctions against Burma over the past decade, based on progress made towards democracy. Reversing this progress requires an immediate review of our sanctions laws and authorities, followed by appropriate action, ”he said.

Biden warned the US not to “take note of those who stand together with the people of Burma at this difficult hour”.

“We will work with our partners across the region and around the world to help restore democracy and the rule of law and hold those responsible for reversing democratic transition in Burma to account,” he said.

A US official later told Reuters news agency that the government had opened high-level internal discussions to get a response from the entire government and intended to consult closely with Congress.

Greg Poling and Simon Hudes of the Washington Center for Strategic and International Studies said there would almost certainly be new sanctions against those involved in the coup.

“But this is unlikely to have an immediate impact on the generals,” they said, as few of them had any intention of traveling or doing business in the US.

In contrast to its response to a 2014 coup in Thailand, the US cannot withdraw its military exercises, training, and sales as military ties with Myanmar are almost non-existent, they said.

Former President Barack Obama began easing sanctions against Myanmar in 2011 after the military eased its grip and lifted many remaining restrictions in 2016. In 2019, the Trump administration imposed targeted sanctions on four military commanders, including coup leader General Min Aung Hlaing, on charges of abuse of Rohingya Muslims and other minorities.

Human rights groups said the international community must recognize the shortcomings of their engagement during Myanmar’s democratic transition and take tougher steps to contain the military.

“The Tatmadaw exposed the enormous weaknesses of the democratic institutions in Myanmar through this brazen coup,” said Akila Radhakrishnan, President of the Global Justice Center.

“Given the history of military rule, the risk of violence and atrocities is greater than it has been in recent years. We cannot ignore the repeated failures of the international community to take concerted action to contain military power and hold them accountable for their ongoing human rights violations, including their campaign of genocide against the Rohingya. “

As head of state, Aung San Suu Kyi defended her nation in the International Court of Justice in The Hague in 2019 against allegations of genocide in the treatment of the mostly Muslim Rohingya after at least 740,000 people fled the western state of Rakhine following brutal military crackdown in 2017.

According to observers, the armed forces continue to abuse rakhine and other ethnic minority areas in the country.

The Human Rights Documentation Network – Burma (ND-Burma) said an emergency meeting should be convened in the United Nations Security Council and a delegation should be sent to Myanmar.

“Members need to address the current situation in Myanmar with greater force and effectiveness than in the past,” ND-Burma said in a statement.

Major General Min Aung Hlaing (right) took power from the civil government of Aung San Suu Kyi in a coup on Monday [File: Hein Htet/EPA]Aung San Suu Kyi’s National League for Democracy Party won a landslide victory in the November 8 elections, but the army, which is guaranteed a quarter of the seats in parliament and also has a proxy party, cried badly.

She claimed Monday that her takeover was in response to electoral fraud, although there was no evidence of wrongdoing, and that her actions were justified under the armed forces’ 2008 constitution.

“For years world leaders have praised a ‘democratic’ transition and constitution that gave the military the power to orchestrate today’s coup,” added Radhakrishnan of the Global Justice Center. “Now we see the consequences of an international order that blinds itself to reality in the interests of ‘progress’ and economic investment rather than protecting human rights.”

White House spokeswoman Jen Psaki reported at a regular press conference that Washington had “intensive” talks with allies. She declined to say what measures other than sanctions were being considered.

Psaki said Biden’s remark that the US “takes note” of how other countries are reacting is “a message to all countries in the region.”

Top Democrat on the Senate’s Foreign Relations Committee, Robert Menendez, said Washington and other countries should “impose severe economic sanctions and other measures on Myanmar’s army and military leadership” if they fail to liberate the country’s elected leaders and themselves remove from the government.

He also accused the Myanmar army of “genocide” against minority Rohingya Muslims – a determination that has not yet been disclosed by the US government – and of an ongoing campaign of violence against other minorities.

Senate Republican leader Mitch McConnell, who like members of the Biden administration had close ties with Suu Kyi, described the arrests as “terrible” and said Washington must “impose a cost” on those behind the coup. 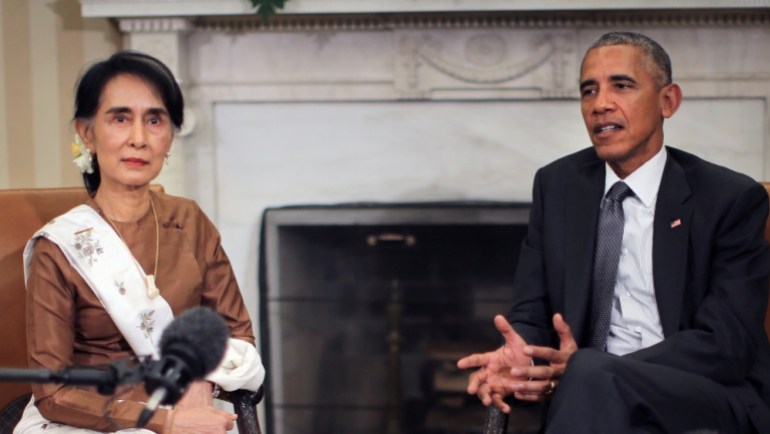 US President Barack Obama, who traveled to Myanmar and also invited Aung San Suu Kyi to the White House, saw his work to end the decades-long military rule in Myanmar as one of his most important political achievements [File: Carlos Barria/Reuters]”The Biden government must take a strong position, and our partners and all democracies around the world should follow this authoritarian attack on democracy,” he said.

The events in Myanmar pose a significant challenge to the Biden government and its efforts to develop robust Asia-Pacific policies to withstand China.

Many members of Biden’s Asian political team, including its leader Kurt Campbell, are veterans of the Obama administration, which, after leaving office in 2016, welcomed its work to end the decades-long military rule in Myanmar as a major foreign policy achievement. Biden was Obama’s vice president at the time.

Watch: Lisa Worth on Making Your Entrepreneurial Goals a Actuality