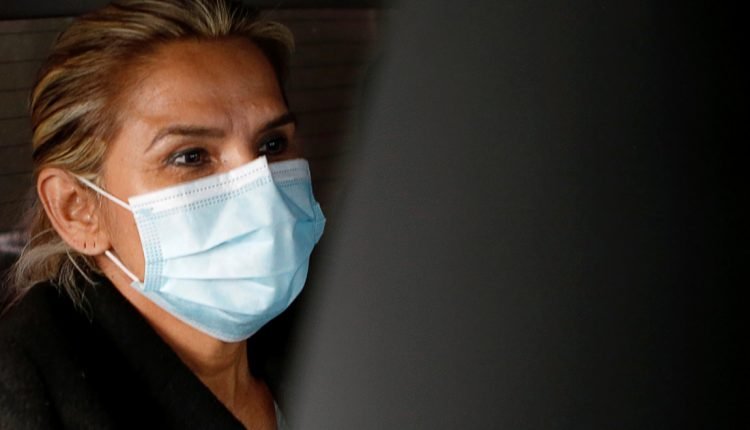 Prosecutors are accusing Jeanine Anez and two of her ministers of sedition, terrorism and conspiracy over an alleged coup in 2019.

Bolivia’s former interim president Jeanine Anez appeared on video for the first time in front of a judge on Sunday after authorities arrested her on allegations that she helped spark a 2019 coup against the country’s then government.

During the hearing, Anez and her former Energy and Justice Ministers, Rodrigo Guzman and Alvaro Coimbra, were charged with sedition, terrorism and conspiracy.

Prosecutor Harold Jarandilla said the defendants had used allies of the security forces to urge then-President Evo Morales to resign after the October 2019 elections sparked protests in the South American nation.

Jarandilla also claimed the former officials “manipulated” events in the political vacuum that followed the riots to install Anez as interim president.

Anez was arrested in her hometown of Trinidad in the early hours of Saturday morning and flown to the capital, La Paz.

She had tweeted an arrest warrant saying “The political persecution has begun” and has since asked the European Union and the Organization of American States to send observer missions to follow up on the case.

Jarandilla said Anez poses a flight risk and has requested that she and her ministers be held in custody for six months.

According to an arrest warrant from the Reuters news agency, several other ministers in the Anez government are wanted in addition to police, military and opposition officials.

Morales, Bolivia’s first indigenous president, resigned in November 2019 under pressure from some citizens, the armed forces and opposition leaders who accused him of stealing the elections a month earlier.

He returned from exile in Argentina last November after his party’s candidate for Movement for Socialism (MAS) won long-awaited presidential elections.

President Luis Arce, who received 55 percent of the vote in October 2020 and easily avoided a runoff election, pledged to rebuild Bolivia after a turbulent year marked by political turmoil and the coronavirus pandemic.

A protester takes part in a protest outside the headquarters of the Special Force to Fight Crime (FELCC) to call for jail for Jeanine Anez in La Paz, Bolivia, March 14 [David Mercado/Reuters]On Saturday morning, Morales tweeted that “the authors and accomplices of the dictatorship that pillaged the economy and attacked life and democracy in Bolivia” should be investigated and punished.

Anez has claimed she was a victim of political persecution and insisted that she participate in a “constitutional succession” to replace Morales upon his resignation.

In the meantime, the United Nations, the EU and the United States have all called for due process.

Human Rights Watch’s American director Jose Miguel Vivanco said Saturday that the arrest warrants for Anez and her ministers “contain no evidence that they have committed the crime of terrorism.”

“Because of this, they create legitimate doubts as to whether this is not a politically motivated process,” he tweeted.

The Bolivian Bishops’ Conference (CEB) demanded the immediate release of the prisoners.

“The politics of revenge and resentment and a judicial system that is dependent on political power do not create trust in people and will harm us all sooner or later,” said the CEB in a statement published late on Saturday.