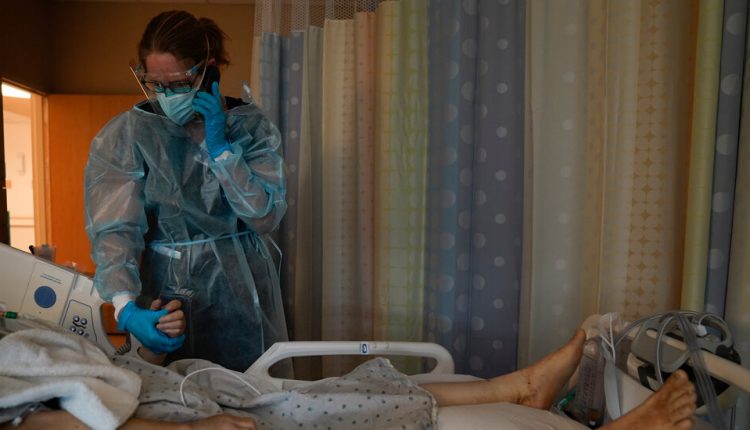 A scene like this takes place dozens of times a day in Covid-19 stations across California: A hospital chaplain watches as a death is announced by machine.

Kristin Michealsen, a hospital chaplain in Los Angeles, was standing by a man’s bed holding his hand. His relatives gathered at their home just minutes away from the hospital – they were not allowed to enter the infirmary. The patient’s heart had just stopped. Ms. Michealsen, an ordained minister, had watched a computer monitor as she accompanied the man to the edge of his life. Eighty beats per minute. Sixty. Fourty.

California has recorded an average of 433 deaths per day for the past week. On Tuesday, it became the state with the highest number of coronavirus deaths, surpassing New York.

In the depersonalized math of the pandemic, there are two ways to look at the ravages of the virus in California. As the most populous state in America, California has by far the most cases in the country – more than 3.4 million – and now has the most deaths. However, when adjusted for the large population, California has a lower death rate than 31 states and Washington DC

With about 114 deaths per 100,000 people, the state has about half the rate of New York, New Jersey, Massachusetts, or Mississippi. The differences between New York and California could be even greater given the likelihood that New York undercounted deaths in the hectic early stages of the pandemic because virus tests were so limited.

However, these mitigating statistics mean little for the families of the more than 44,900 people killed by the virus in California. Even for chaplains like Ms. Michealsen, who saw two other patients die that day in January when the photo was taken by an Associated Press photographer, the numbers don’t mean much either. Often times, she is the only other person in the room when death comes. Sometimes a nurse holds the other hand of the dying patient.

“When we come into this world, we are immediately surrounded by people – we have human touch,” said Ms. Michealsen of the Providence Holy Cross Medical Center in Mission Hills, Los Angeles last week. “I just think if we leave this world we should have the same thing.”

The pandemic has taken an uneven toll in California, with people in the south and the agricultural Central Valley being much more severely affected than those in the north.

But even in San Francisco, where nearly 350 people have died from the virus, the atrocity of the pandemic – the inability of families to surround their dying relatives, the disruption of centuries-old mourning rituals – is palpable.

“I’ve never seen the many shifts of loss we are experiencing in 15 years,” said Naomi Tzril Saks, chaplain at the University of California at San Francisco Medical Center on Parnassus Heights. Like chaplains across the country, Ms. Saks and her colleagues have done everything possible to remedy the cruel isolation of the disease.

“We’ve grown bands and people who play violin,” said Ms. Saks. “We enlarged the son of someone who was incarcerated and she hadn’t seen him in years before she died.”

“There are stories and experiences from this pandemic that will stay in my body for a very long time,” said Ms. Saks.