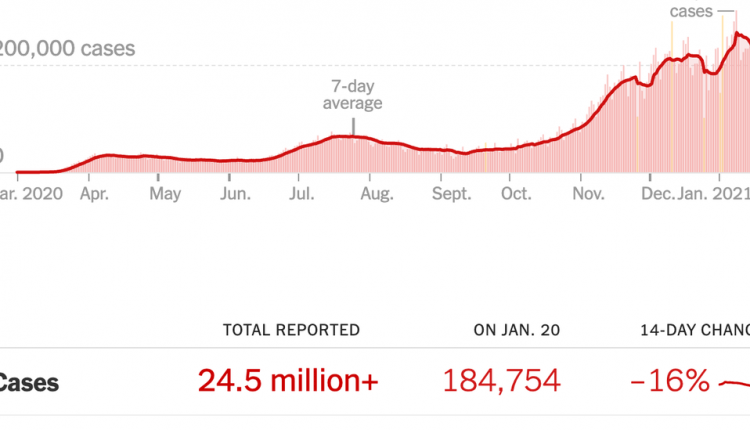 On his first full day in office, President Biden revealed a “full-blown war effort” to fight the coronavirus, a highly coordinated federal response that included a dozen decrees or measures to contain the pandemic.

“We are in a national emergency,” Biden said at the White House event and announced the plan. “And it’s time we treated it like one.”

The 200-page national strategy aims to accelerate the production of Covid consumables, increase the country’s testing capacity, and reduce the spread of the virus – while reaching out to workers and color communities disproportionately affected by the virus.

Among the orders was one that required the wearing of masks at airports and in many “trains, planes, ocean-going ships and intercity buses”. Another directed federal agencies to issue guidelines for safely reopening schools and businesses while protecting workers and teachers. Other actions included calling for better data collection systems, programs to find more Covid treatments, and setting up a health justice task force to focus on populations affected by the virus.

The strategy is structured around seven goals, including restoring confidence in the American people through “conducting regular, expert-led, science-based briefings” and promoting justice “across racial, ethnic and rural / urban boundaries.”

Experts have questioned two pillars of the plan. The first is to increase the supply of vaccines by invoking the Defense Production Act. The problem is that both Pfizer and Moderna are already producing cans at full capacity – together 12 to 18 million cans per week.

The second pillar under scrutiny is the government’s goal of getting 100 million cans into arms in 100 days.

The country is already well on its way to achieving this goal and vaccinates around a million people every day. If the Biden government is to speed things up, experts say the focus should be on solving problems in state and local vaccination centers. According to the Centers for Disease Control and Prevention, these centers administer only 46 percent of the doses that the federal government ships out.

Has the US peaked?

After months of rising case numbers, the US is showing the first signs that the recent surge is slowing.

The number of new cases has decreased significantly in the last week, falling on Wednesday from around 246,000 in the previous week to an average of around 194,000 over seven days – a decrease of around 20 percent. Across the country, 30 states report sustained decreases in cases, and no states with low case numbers report increases. It’s a noticeable difference from mid-December, when almost every state saw record numbers of new infections. Even hospital stays are starting to decline.

While these indicators are positive, it is too early to know whether the US has definitely turned a corner or whether it will simply plateau before rising any further. The biggest wild cards are the new, faster-spreading variants that are gaining a foothold across the country, even if the vaccination campaign is slower than expected.

Britain offers a sobering lesson. The country was among the first to start vaccinating its population, but a new, more contagious variety was quickly spreading and hospitals were being pushed to their limits. Hundreds of soldiers have been sent to medical centers and organ transplant centers have stopped performing urgent surgeries. In the past week, the country has suffered more deaths per capita than any other country.

The US is seeing encouraging signs, but health officials stress that the pandemic is far from over and Americans cannot give up their vigilance. Although infection rates are falling, they are still incredibly high and more than 4,300 people in the US died from the virus yesterday, the second highest daily total number of pandemics.

I enjoy getting braless all day except when I go to the grocery store. I finish more craft projects and go for walks with my husband every day to discover new trails in our area which has many urban trails we’ve never been on before.