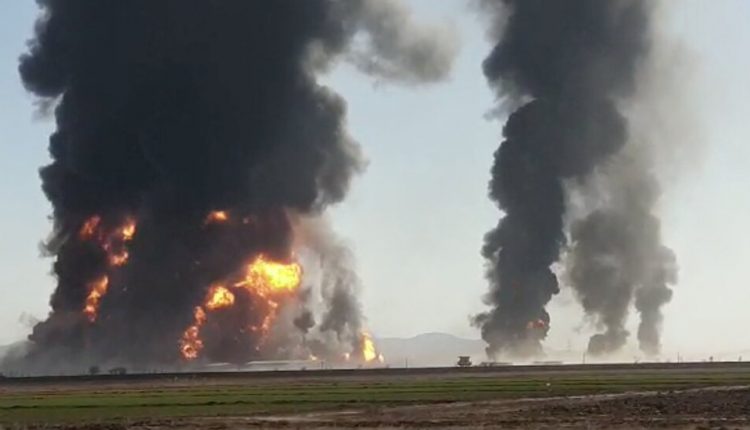 KABUL, Afghanistan – A fuel tanker exploded at a crowded border post in western Afghanistan on Saturday afternoon, sparking a massive fire that spread to more than 100 other tankers as violent flames slowed the response of firefighters and rescue vehicles, Afghan officials reported.

Officials said they had failed to determine why the first tanker exploded shortly after noon at the Islam-Qala customs post on the Iranian border. They raised the alarm on Saturday evening that the fire in the overloaded customs complex was spreading rapidly and could devour hundreds more tankers at the border.

Officials in Herat said they could not confirm Afghan and Iranian media reports that up to 500 tankers had already been burned and the fire had spread to Iranian customs posts across the border.

At least 17 people were injured and the number is expected to rise, said Mohammad Rafiq Sherzay, the province’s public health spokesman.

The tankers import fuel and natural gas from Iran. The United States has granted Afghanistan an exemption from Iranian sanctions for importing fuel, even though US-backed Afghan security forces are prohibited from using fuel.

Iran is Afghanistan’s largest trading partner and the transition is critical to the economies of Herat Province and western Afghanistan. A long-term interruption of the crossing could put the region in trouble.

The Taliban operate so-called shadow governments in large parts of the countryside outside the city of Herat, while the US-backed government controls Herat and other population centers. The militants often set up checkpoints on roads and levied taxes on goods and vehicles.

Because of the fire, the power supply from neighboring Iran was cut off as a precautionary measure, so that the city of Herat ran out of electricity when night fell, said Jailani Farhad, a spokesman for the governor of Herat. The provincial capital, the city of Herat, is about 75 miles east of the border crossing on a major commercial transit route between Afghanistan and Iran.

“All of our armed forces and our firefighters are trying to control the fire,” Farhad said.

David Zucchino reported from Kabul and Asad Timory from Herat.