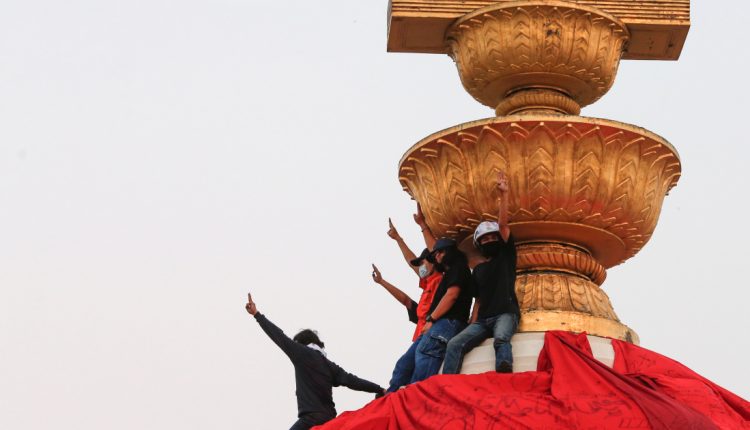 Protesters calling for the release of activists detained under laws prohibiting insulting the king clash with police shortly after wrapping Bangkok’s democracy monument in red cloth.

Pro-democracy activists in Thailand have climbed a massive monument in the capital, Bangkok, wrapped it in purple cloth and called for an end to the kingdom’s draconian royal defamation laws.

Protesters threw paint at the police on Saturday and several small bangs were heard during a standoff near a city shrine after the demonstration was removed from the Democracy Monument and main leaders called for it to disperse. Activists said the red cloth on the monument in Bangkok’s historic district was the blood of fighters for democracy.

Police deputy spokeswoman Kissana Pattanacharoen said more than 20 police officers were injured in the clashes and seven or eight people were arrested for questioning. He also said that at least one cracker exploded on the scene.

The dynamism of the youth-led protest movement calling for a revision of Prime Minister Prayuth Chan-ocha’s government has slowed in recent months due to a new wave of coronavirus infections in Thailand.

But the recent arrest of four prominent leaders accused of insulting the monarchy in mass demonstrations against the government last year has re-stimulated hundreds of protesters to act.

In Bangkok, police officers’ shields are covered with red paint [Soe Zeya Tun/Reuters]The Majesty’s Law, contained in Article 112 of the Thai Penal Code, provides sentences of up to 15 years in prison. Student activists say the law has been misused for decades to suppress political opposition to a military-royalist establishment.

“We want Article 112 to be repealed and four of our leaders and other political prisoners sentenced under this law to be released,” said 24-year-old protester Chutima Kaenpetch.

As night fell, hundreds marched to the Grand Palace, but were hit by police in full riot gear and barbed wire in the area. Despite the protest leader Panusaya Sithijirawattanakul calling for an end to the rally, several protesters continued to fight the authorities.

The government, led by former military ruler Prayuth, denies any abuse of the law, saying political opposition is allowed, but violating the law by insulting the king will be punished.

Thailand is officially a constitutional monarchy, but the king is particularly valued by conservative Thai culture, which depicts him as the protector of the Buddhist religion and nation.

The student movement that began last year shattered long-cherished taboos by openly criticizing King Maha Vajiralongkorn, who has amassed too much personal power since ascending to the throne after his father’s death in 2016.

The Royal Palace has refused to comment directly on the protests, but Prayuth and government officials have said the criticism of the king is unlawful and inappropriate.

At their peak, the rallies drew tens of thousands, with demonstrators taking inspiration from Hong Kong’s pro-democracy movement.

In November, police used tear gas and water cannons against demonstrators using liquid enriched with an irritant. More than 40 people were injured in clashes.