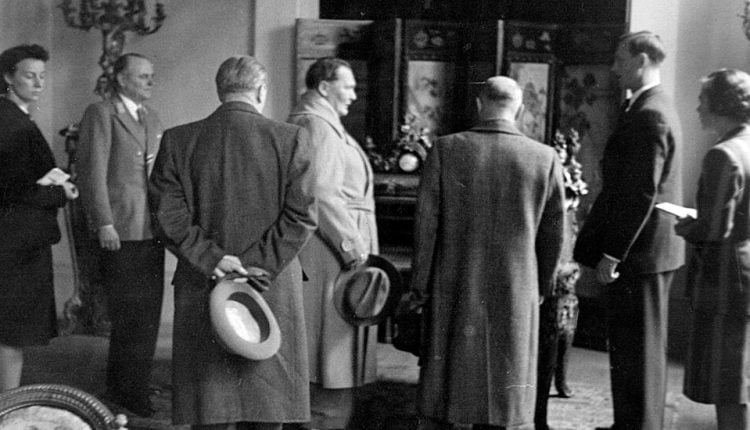 How a Historian Obtained Shut, Perhaps Too Shut, to a Nazi Thief

In the late 1990s, most of the Nazi art experts pillaging European Jews were either dead or living quiet lives under the radar. Not so Bruno Lohse, who acted as an art agent for Reichsmarschall Hermann Göring, Hitler’s right-hander.

In 1998, Jonathan Petropoulos, Professor of European History at Claremont McKenna College, met Lohse in Munich. Lohse, an effete, bossy figure standing 6-foot-4 and weighing over 300 pounds at the time, Petropoulos writes, welcomed the chance to indulge the American scholar with his war stories. They met more than two dozen times over the next nine years.

Lohse often took out a box of old photos and mementos so Petropoulos could look over his shoulder and ask questions. When Lohse died in 2007 at the age of 96, he bequeathed this box to Petropoulos, who used it as the source material for his new book, Goering’s Man in Paris: The Story of a Nazi Art Looter and His World, published this month by Yale University was Press.

Any relationship between an information-seeking scholar and a former Nazi is inevitably complicated, and Petropoulos makes it clear in the prologue that he had no intention of becoming friends with Lohse. He admits, however, that he “soon came to appreciate his charms” and enjoyed their meetings over a liver dumpling soup that gave the professor access to a lost world.

“I’ve always tried to keep a certain distance and there was always some element of a game being played, a game of cat and mouse,” Petropoulos said in an interview earlier this month. “This game got a little bit more spirited over time, a little bit more like catching me if you can.”

In the book he explains why it was worth continuing the conversations.

“The paper trail for these art looters, as for most of the secondary personalities in National Socialist Germany, has largely dried up after their interrogations and denazifications at the end of the 1940s,” writes Petropoulos. “The oral tradition of Lohse and other old Nazis offered one of the few possibilities to reconstruct the post-war experiences of this cohort.”

Petropoulos used some of this material for his book “Das Faust-Bargain: The Art World in National Socialist Germany”, published in 2000. When potentially incriminating information emerged from lunch, he wrote that he had reported it to the FBI and restitution experts from organizations such as the Art Loss Register. This new book brings Lohse into focus as a personality and axis point from which a network of art dealers, collectors and museum curators can be explored who are connected to looting by the Nazis during and after the war.

“I think he got more comfortable and safer at some point,” said Petropoulos. “I don’t know if he ever opened up with me that much, but I always got small pieces from him.”

Lohse was imprisoned and investigated at the end of World War II. He was tried in France in 1950 and acquitted.

Lynn Nicholas’ landmark 1994 book on the plundering of the Third Reich, “The Rape of Europe”, positions Lohse as one of several agents working for the SS in Paris and “exchanging” modernist art (which the Nazis labeled as degenerate) old masters controlled for their more valuable works of art. “Göring’s Man in Paris” uses him as one of the main planets orbiting Göring, in a solar system that included Nazi art dealers such as Alois Miedl, Walter Andreas Hofer, Maria Almas Dietrich and Karl Haberstock.

Petropoulos argues not only that Lohse was instrumental in Göring’s looting, but also that he stole many works for himself and kept some hidden until his death. Petropoulos reports that Lohse was personally involved in emptying Jewish houses and boasted to a German officer that he had beaten Jewish owners to death “with his own hands”.

Lohse returned to the art trade in the 1950s from a new base in Munich, where other former Nazi art experts had worked again and mainly acted within a “circle of trust” in Germany and Switzerland.

Often these networks are connected to the larger art world. One particularly complex relationship that Petropoulos deals with is between Lohse and Theodore Rousseau, a former US Art Looting Investigation Unit officer who later became deputy director of the Metropolitan Museum of Art. Petropoulos quotes the correspondence between the two over 25 years from the Met’s own archives, which indicates a friendly business relationship.

There is no evidence that Rousseau ever bought art from Lohse. “Prior to 1959, Rousseau probably used Lohse to gather information as part of his search for works,” Petropoulos said, “but that may have changed in the 1960s when that relationship became more personal and friendlier. We don’t have the full picture of the iceberg, but we can see the tips out there. I’ve done all I can and I hope other researchers will follow up. “

A Met spokeswoman said in an email that the museum’s archives contain about 30 letters between Lohse and Rousseau, six of them from Rousseau from 1952 to 1969. Describing them as “generally short, polite and professional in tone,” she said the Met never bought a work from Lohse.

What emerges from Petropoulos’ research is a portrait of a charismatic and shameful figure who has corrupted everyone he touched. It examines the tangled relationships that Nazi dealers have with dozens of other participants in the art trade.

However, the turn of this scientific venture comes when Petropoulos is on the internet. In 2000 he took part in the search for “Fischer Pissarro”, a Parisian street scene by Camille Pissarro that was stolen from the Viennese home of a prominent German-Jewish family and auctioned off in 1940.

The heirs suspected that the work could be linked to Lohse and asked Petropoulos for help. With the help of a former Lohse employee, the art dealer Peter Griebert, Petropoulos located the work at a private foundation in Liechtenstein – but as it turned out (to his surprise, as he relates), this foundation belonged to Lohse. It is unclear how Lohse came into possession of the work.

This “mishap”, as Petropoulos put it in an article in the Los Angeles Times, led the heirs to accuse him of blackmailing them for collecting fees and a percentage of the sale proceeds. He was never charged with a crime, but Petropoulos resigned from his position as director of the Center for the Study of the Holocaust, Genocide and Human Rights at Claremont McKenna.

In a statement, the college said it had conducted an investigation and found Petropoulos “complied with applicable contractual and legal obligations” while attempting to help restore the painting. He stays at his faculty. Petropoulos admits that he probably shouldn’t have interfered and writes in the book that he never made any money doing the work. “I tried to be helpful and get a return on investment, but things turned out the way they did,” he said.

The chapter that tells this story turns into an area reminiscent of Janet Malcolm’s “The Journalist and the Killer,” exploring the ethical consequences of getting too close to a source. While Petropoulos falls into this rabbit hole, “Göring’s Man in Paris” becomes a more complex read that raises questions about reliability in all facets of the art world.

“For me, the greatest ethical challenge arose from the mutual feeling of a kind of friendship that arose in my relationship with Lohse,” writes Petropoulos. “I told him without a doubt that I thought what he did in the war was reprehensible and I did not condone his actions in any way. He didn’t seem affected by this statement – it actually brought a smile to his face. “