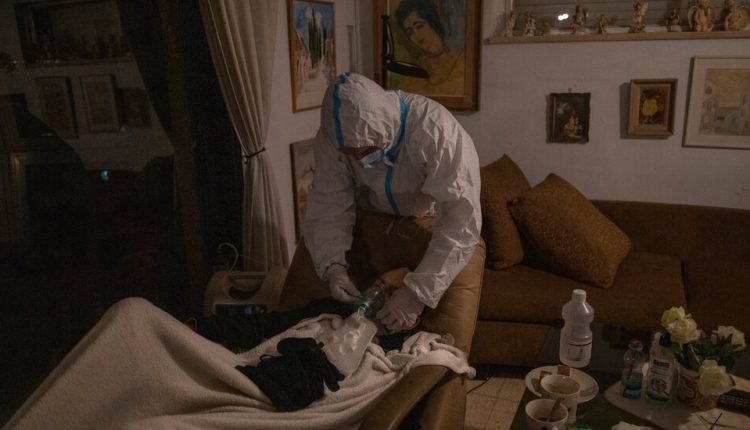 Times Insider explains who we are and what we do, and provides a behind-the-scenes look at how our journalism comes together.

When the pandemic hit Israel last year, I knew the photographer who managed to break into the ultra-Orthodox Jewish community would find an exciting story. Their extremely island-like way of life – regular prayer, collective religious studies, and mass weddings and funerals – is incompatible with social distancing. I feared that doing so would make them particularly vulnerable to the coronavirus and exacerbate tensions between the ultra-Orthodox and the secular world.

But I never thought that this photographer would be me. My daughter had just been born. I moved to another house. And access to the Haredim, as the ultra-Orthodox are also called, is extremely rare. They usually don’t let outsiders in.

But over the past few months I’ve slowly managed to get a glimpse of their lives through this pandemic. The resulting photos and videos were posted online on Wednesday, accompanied by a report from the Times’s new Jerusalem office manager, Patrick Kingsley.

The process began last October when I heard about a Haredi charity providing medical care to coronavirus patients in the ultra-Orthodox community, many of whom are wary of hospitals and are treated at home. I gave a brief account of the charity at the time, but not in-depth. I just went to the patients’ front doors with his volunteers and then waited for them to show up a few minutes later.

But when I saw her go in, I became curious. How was it in these houses? And what would it tell us about how the Haredim dealt with the pandemic?

Over the next several months, I called the charity director, Yitzhak Markowitz, repeatedly and asked him if I could accompany his volunteers into people’s homes. But he kept saying that they were too busy, that the pandemic was too much. Once we arranged to meet and I even brought all the protective equipment I needed for the process – protective suit, visor, gloves. But then he canceled.

Finally, in January I received another call from Mr Markowitz. He agreed to let me accompany his team while members drove from house to house – and went inside with them. And so began some of the most intense weeks of my life.

The first days were tough. I didn’t feel welcome by the team. And the families didn’t seem to want me there. I started to think that this was an impossible mission. But David Furst, the international photo editor, pushed me further, as did one of his deputies, Craig Allen.

So every day I drove from my home in Tel Aviv to Jerusalem and parked in one of the city’s ultra-orthodox neighborhoods, Mea Shearim. I would arrive around 9 a.m., buy lots of coffee and snacks, and start calling members of Mr. Markowitz’s team. I would ask them to join them. And every now and then, often after waiting several hours, they would call back and say, “Come to this place now.” Then I could follow them for most of the night before repeating the same process the next day.

There were so many families and so many moments that I couldn’t take pictures. Families and patients, many of whom wanted privacy (I asked permission before going into each home) often asked me to put my camera down or told me to go completely. What you see in these photos is eye-catching – but it doesn’t tell us everything about what life was like in those houses.

I think it helped that I wasn’t a complete stranger to them. I spent many days in the synagogue. I don’t find it strange to pray or look for spiritual goals in life. I understand where they are from.

At the same time, I still don’t know her very well. I was just watching them. I didn’t really know what was going on behind the scenes.

The process that Mr. Kingsley went through when he came to see me for a few days was arduous. Before entering each house, we had to hurry to get there, then find a parking space – which is not easy in a crowded neighborhood like Mea Shearim – and then change into new protective suits before the volunteers entered the houses without us.

Perhaps the hardest part was working with a camera. I usually bring two or more cameras, but it was too complicated for this project. Cameras were not covered by the protective suit. You could possibly be carrying the virus. After leaving a house, I would think: if I touch the camera, will I get infected? Even after cleaning, I was still worried.

I usually see my camera as a friend. But during this task it became a threat.

Even now, I don’t let my baby play with it.

Cuts off Information Down Beneath and Blocks Entry to Well being Departments, Charities, Emergency Providers within the Course of