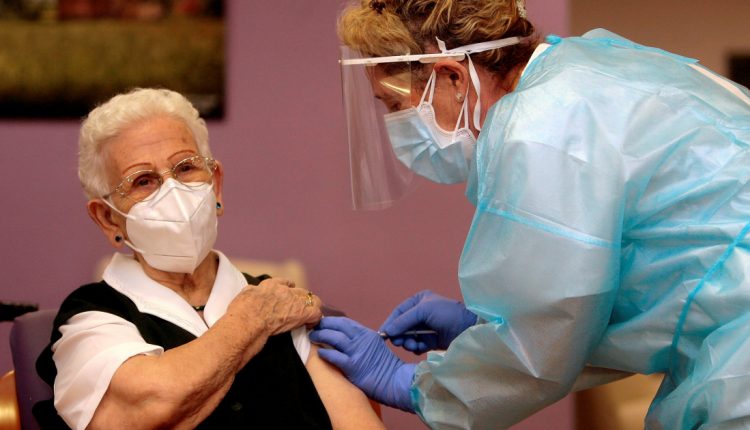 Health workers, the elderly, and political leaders have fired some of the first shots on the block to reassure the public that the vaccinations are safe.

Europe has launched a massive COVID vaccination campaign involving elderly patients and medical professionals to fight the pandemic that has paralyzed the economy and claimed more than 1.7 million lives worldwide.

The 450 million-strong region has signed contracts with a number of suppliers for more than two billion doses of vaccine, with a goal of having all adults vaccinated by 2021.

“It didn’t hurt at all,” said Mihaela Anghel, a nurse at the Matei Bals Institute in Bucharest, who was the first in Romania to receive the vaccine.

“Open your eyes and take the vaccine.”

In Rome, Italy, five doctors and nurses wearing white scrubs sat in the semicircle of the Infectious Disease Hospital in Spallanzani to receive their doses.

“The message is a message of hope, trust and an invitation to share this decision,” said one of the recipients, Dr. Maria Rosaria Capobianchi, who heads the virology laboratory in Spallanzani and was part of the team that isolated the virus in early February.

“There is nothing to worry about.”

Domenico Arcuri, extraordinary commissioner on the epidemic, said it was telling that Italy’s first vaccine doses were given in Spallanzani, where a Chinese couple from Wuhan tested positive in January and Italy’s first confirmed cases.

World War II veteran Emilie Repikova receives a dose of Pfizer BioNTech vaccine at the Military University Hospital in Prague [David W Cerny/Reuters]The numbers vaccinated in the first few days of the Pfizer BioNTech surge are largely symbolic and it will be months before enough people are considered protected to consider a return to normal after the pandemic.

Meanwhile, the first cases of a new virus variant have been discovered in France and Spain, and it has spread rapidly in London and southern England.

The new variant has led to European countries, the USA and China restricting travel for people from Great Britain.

Germany’s BioNTech is confident that its coronavirus vaccine will work against the new British variant, but added that more studies are needed to be absolutely safe.