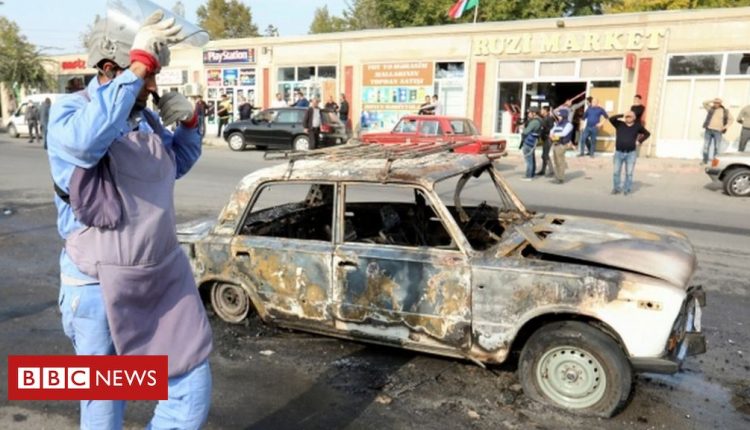 Azerbaijan has accused the Armenian military of killing at least 21 civilians in a rocket attack as fighting over the disputed Nagorno-Karabakh area intensifies.

Dozens more were reportedly injured in the strike in the Azerbaijani city of Barda, not far from the ongoing clashes.

Armenia has refused to carry out the attack, accusing Azerbaijan of targeting a maternity ward in the region.

On September 27, fighting broke out in the Nagorno-Karabakh region.

The mountain area officially belongs to Azerbaijan, but is run by ethnic Armenians.

What has happened in the last few strikes?

Images posted on social media showed damage to roads and vehicles with multiple bodies in body bags laid out on the street.

A local resident, Ulviyya Babayeva, said she was in her car nearby when she heard three explosions and decided to drive to the area.

“We saw a fire … bombs were dropped,” she told the BBC. “One fell on the car in front of a bank building, fragments [of bombs] all over, [broken] Glass [of cars/windows]… one of the bombs fell in front of the fire station, there are dead and injured people. “

Police officers and other service personnel have been sent to Barda to take the injured person to the hospital and provide additional security in the city, the Azerbaijani Ministry of Interior said.

The ministry added that the attack was a gross violation of international humanitarian law and that the Armenian government should take responsibility.

Independently of this, a statement by the self-proclaimed Nagorno-Karabakh Republic (NKR) states that Azerbaijani armed forces have hit a maternity hospital and other “civilian infrastructure” in the city of Stepanakert.

The NKR added that information on possible victims in the facility under construction would be “clarified”.

The most recent attacks come just days after a US-brokered truce was agreed between the two sides.

The Azerbaijani Ministry of Defense said Mr. Harutyunyan, who was accused of committing war crimes in the region, was identified by surveillance teams getting into a vehicle which was then attacked by a drone attack.

What about the truce?

US President Donald Trump tweeted shortly after the announcement by the US State Department over the weekend to congratulate those involved after “intensive negotiations”.

However, just minutes after it came into force, Armenia and Azerbaijan accused each other of violating the ceasefire.

Azerbaijan said Armenian forces had started bombarding the city of Terter and surrounding villages in “gross violation” of the agreement.

The Armenian Defense Ministry said Azerbaijani artillery fired at military positions in different parts of the front line after the ceasefire agreement began.

Clashes that began in the region in September quickly escalated into major conflict, with city bombardment and the alleged use of banned cluster munitions.

Several thousand people have died and shelling has killed civilians on both sides. Tens of thousands have fled their homes.

More on the Nagorno-Karabakh conflict:

Media signatureOrla Guerin at the site of the explosion in Ganja: “It looks more like a comprehensive war than a ceasefire.”

Cruz Blasts Twitter: ‘Mr. Dorsey, Who the Hell Elected You?’