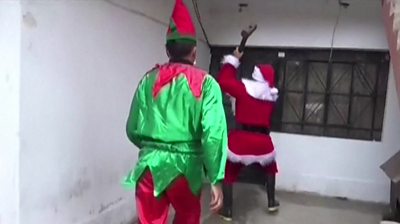 A police drug squad in Peru searched a house disguised as Santa Claus and an elf and arrested a suspected drug dealer.

A police spokesman said the man was accused of selling drugs outside his home near a school.

Officers wearing flak jackets under their costumes arrived in a concealed van before breaking into the house, where they discovered a bag containing drugs, balaclavas and a gun.

The country’s police have used disguise during the raids for some time and say the method is an effective tactic.

In the past they were known to dress up as homeless people and street sweepers.

‘Massive Sky’ Delivers One other Surprising Twist In Fall Finale – .