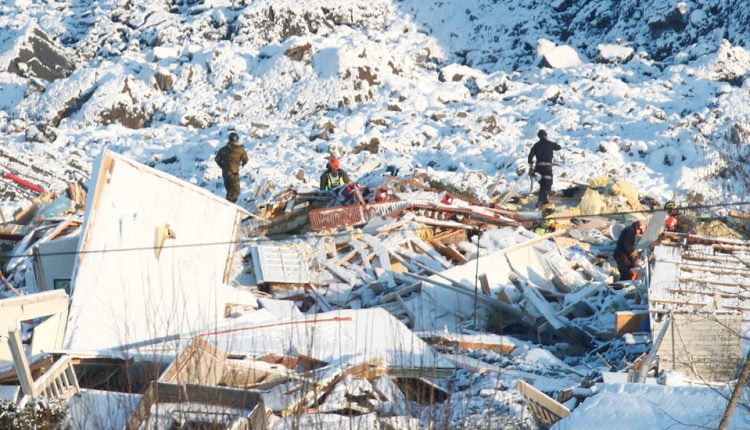 Rescue workers have recovered the bodies of seven people killed in a landslide in Norway last week and they are still looking for survivors, police said Monday.

After the disaster in the village of Ask, about 30 miles northeast of Oslo, three people were missing, police said. Officials said Wednesday’s landslide that resulted in the evacuation of people from the area was related to rapid sound that can fall to a liquid state if overcharged.

“We are desperate about the terrible and tragic outcome of this slide,” Anders Ostensen, the mayor of Gjerdrum, the local community that Ask is a part of, told reporters on Monday. “The situation is still unreal to us, but we’re trying to turn things around and we’ve started to get back to normal.”

About 1,000 people were evacuated from Ask after the clay soil in the area collapsed, at least seven houses were swallowed in streams of mud, and 10 people were injured.

The military and the fire brigade help with rescue operations that have been made difficult by short days with limited daylight, cold weather and the difficulty of navigating on the sometimes unstable clay.

Six of the victims whose bodies were recovered on Friday and in recent days have been identified. They are: Eirik Gronolen (31), Lisbeth Neraas (54) and their son Marius Brustad (29) as well as Björn-Ivar Grymyr Jansen (40), Charlot Grymyr Jansen (31) and their 2-year-old daughter Alma Grymyr Jansen. A body found has not yet been named.

King Harald V and Queen Sonja visited the site of the landslide on Sunday and met rescue workers, local volunteers and survivors. “I have trouble saying something because it is absolutely terrible,” said King Harald. They thanked the rescue workers and were impressed by the relief measures.

As of Monday, it wasn’t clear why the sound collapsed.

“We have to assess what happened during the construction in Gjerdrum,” Tina Bru, Norway’s Minister for Energy and Oil, told NRK on Monday. “It’s natural to go through the rules and see what we can learn from them so that something like this doesn’t happen again.”

Although landslides are relatively rare in Norway, another in the country’s northern region swept at least eight buildings into the sea in June but injured no one. According to government data, more than 110,000 people in Norway live in areas at risk of such landslides. Ask village was in an area at high risk for such landslides, but officials had not classified the area as unsafe for construction.

The Norwegian Geotechnical Institute, an independent research center that has researched the region for landslide risks for developers and the government, has published reports detailing the research in the region from 2003 to 2007. It had indicated that a number of measures are needed to stabilize the area. The institute said it was reviewing documents related to the disaster and police would open an investigation.

The developers told local media that during the construction in Ask they followed the institute’s recommendations, including removing soil from higher soils to reduce pollution of the clay terrain and ensure protection from erosion.

Water and electricity are still in the area, local officials said.

“The village has suffered a severe blow,” said John-Magnus Restad, a pilot who lives with his wife and son about half a mile north of the village. He added that they weren’t sure they would stay on Ask. Although they knew the area was on fast-moving clay, he said he never believed “a slide of this magnitude could happen”.

But the decision was clear to Trine Johnsgard, 60, who said she and her husband Kjetil Johnsgard, who live about 80 meters from the canyon, were lucky enough to be out of their house with their dog Linus, a wallet, and a cell phone flee.

“I hope we don’t have to go back because we don’t dare,” Ms. Johnsgard told VG, adding that she was concerned about the value of her home, which is on a street called Nystulia, which is crowded gives the missing person had lived. “Nobody wants to move to Nystulia now.”