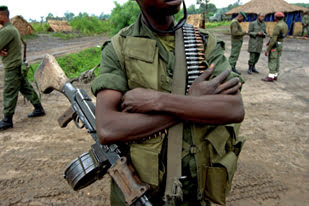 Fighters believed to be from the infamous Allied Democratic Forces (ADF) have killed at least 10 civilians in two overnight attacks in the eastern Democratic Republic of the Congo (DRC), the army said on Sunday.

Soldiers were chasing the attackers, he added.

Local officials confirmed the two attacks, adding that houses were also burned down in the violence.

Kainama is located in the far north of North Kivu Province, where it borders on Ituri. It is only five kilometers from Boyo. Both provinces are on the border between the Democratic Republic of the Congo and Uganda in the east.

The ADF, which was founded in western Uganda in the 1990s with the aim of creating a so-called “Islamic State”, has been based in the eastern Democratic Republic of the Congo since 1995.

Despite not launching raids in Uganda in several years, the group was charged with killing more than 800 civilians in North Kivu and South Kivu provinces in the past year.

While the army has been conducting operations against them in the region since October 2019, it has not been able to stop the massacres of civilians.

After a period of relative calm in January, militants increased attacks on civilians in Beni, North Kivu province, and Irumu in Ituri.

But they are only one of dozens of armed groups that have operated in the mineral-rich border region of eastern Democratic Republic of the Congo for decades.

A recent report by analysts at Kivu Security Tracker estimated that there were at least 122 armed groups operating from north to south in the DRC’s four eastern border provinces: Ituri, North Kivu, South Kivu and Tanganyika.

This Is the Key to Working a Thriving Enterprise in 2021

Hollywood Congratulates Itself at Golden Globes: ‘Artwork Has Led the Method’