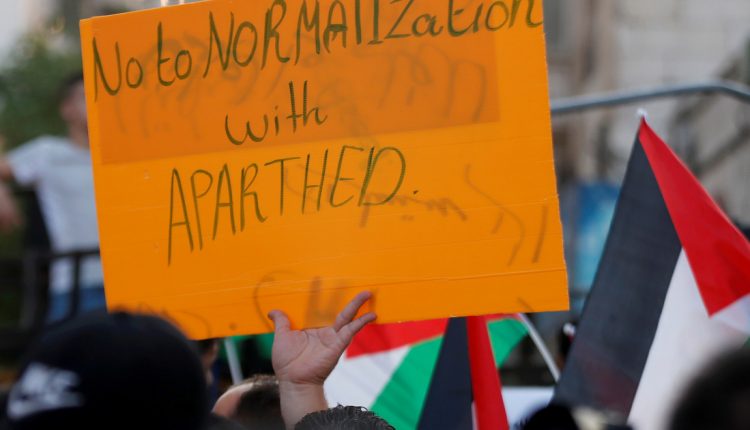 We, a Bahraini Maryam and a Palestinian Mariam, met in 2015 in an Arab café in the small streets of Copenhagen. At that time, one of us escaped the harsh reality of military-imposed occupation in Palestine and the other escaped navigating the US in pain in exile from the oppressive authoritarianism that plagues Bahrain.

We spoke of our collective pains and hopes for the future. In addition, we listened to each other’s experiences and laughed at the intoxicating effects of tear gas in our lungs during demonstrations where we were both “struck down from oppression.” in our respective home countries.

We thought about solidarity together. Where can we meet as Bahraines and Palestinians who both long for dignity and justice? We were both painfully aware that our struggles would be long and difficult as we shared the stories and comparisons of our incarceration in our respective countries.

Oppression made us cross paths then, and again today, albeit virtually. On September 11, 2020, the Bahraini regime announced that it would normalize relations with the oppressor of the Palestinians – Israel. This brought the people of Bahrain and the people of Palestine ever closer together in their experience of submission.

The outrage over this announcement, and before that over the normalization of relations between Israel and the United Arab Emirates, was not because it came as a surprise. The Gulf States have already had informal exchanges with Israel, including buying military and surveillance technology to suppress local people. Their friendly relationships were a poorly kept secret. Rather, it was the audacity of these ruling elites to make public the relationships that go against the will of the majority of the people of the Gulf that caused so much public anger.

For this reason, there have been protests in Bahrain since the normalization agreement was announced, and even some supporters of the regime have joined the opposition to denounce the agreement.

For the Palestinians, anger at the constant news of new normalization activities with Israel has been replaced with deafness. It has become way too taxing to face what has already been decided and is beyond your control. At the same time, there is still fear of what these measures will bring in the future.

The fiasco of normalization was accompanied by absurd narratives propagated by the ruling elites in the participating countries. The Trump administration in the US has called it a “peace deal”. But how can the normalization of relations between the United Arab Emirates, Bahrain and Israel be viewed as a peace deal when the three parties had never been at war? What peace can there be in the continuation of apartheid occupation of the Palestinian lands and the oppression of the Bahraini people?

In Israel, Prime Minister Benjamin Netanyahu has presented the announcements as his latest diplomatic breakthrough, hoping to offset his falling political ratings and the aftermath of the corruption case against him. Finally, yet another election charade could be at hand in which his political survival would be at stake.

In the Gulf, a new discourse has been promoted in the state media as well as in political speeches and religious sermons that the greatest threat to the region and the rest of the Arab states is Iran, not Israel, and that Israel is in fact an ally against the Iranian threat.

This “threat” narrative is used to advance certain political interests. In the case of Bahrain, it is used to prop up the ruling regime and its absolute political and economic control over the country.

Worse still, the deals were also designed to promote justice and community spirit. The Bahrain-Israel deal is portrayed as “life changing” for the small Jewish community in Bahrain, whose representatives “are now more comfortable leaving [to Israel] and come [back]”.

The use of past and present marginalization and injustices Middle Eastern Jews (Mizrahi) have suffered to counter criticism of Israel’s subjugation of the Palestinians. This is the latest trend in Israel’s Hasbara. Of course, this narrative ignores the relentless oppression of the Mizrahi Jews by the ruling Ashkenazi elite of Israel (Israeli Jews from Europe).

The United Arab Emirates and Bahrain have also shown the potential for significant trade and economic growth that the formalization of relations with Israel will supposedly bring. But their people know very well that these new economic opportunities will mean more purchases of arms and military technology by these regimes and the importation of Israeli repression tactics, which will only further cement their tyranny and authoritarianism.

In this sense, the Bahraini monarchy’s announcement of the normalization agreement was not only a betrayal of the Palestinian people, but also another act of repression for the Bahraini people, reminding them that they have no say, freedom, and rights to their own land.

The ruling family, who launched an attack from what is now Qatar and took over Bahrain by force in 1783, could only maintain their rule by using violence against local resistance movements and protecting the British Empire. More recently, since the 1920s, Bahraines have seen civil rights riots almost every decade, also calling them intifadas in an attempt to overthrow the absolute monarchy. The monarchy, in turn, has used the naturalization of foreigners to build a loyal army and police force of non-Bahraini while depriving the indigenous population of their citizenship to change the demographics of the country.

Indeed, the struggles of the Bahraini and Palestinians are remarkably similar. The monarchy in Bahrain also withdrew indigenous peoples from certain parts of the country and built either literal or symbolic barriers between Sunni and Shiite areas, with the Shiite areas being severely impoverished, less accessible and with fewer government services. There are far too many similarities in the oppression of the Bahraini and Palestinian peoples that make it impossible for the two peoples not to recognize one another.

Many Palestinians recognize that these normalization agreements do not reflect the will of the people, but of the ruling elites who did not vote for them. They themselves are oppressed by their leaders – the authoritarian Palestinian Authority in the West Bank and the Hamas authorities in the Gaza Strip. It is for this reason that the Palestinians do not trust chronically corrupt and repressive leaders, but rather the people who continue to face injustices at home and abroad.

The tragic consequence of these deals is that in the end we, the people who yearn to build bridges of solidarity and find dignity and liberation in our homes, will suffer. What will emerge from them will be no different from what emerged from the Oslo Peace Accords between the Palestine Liberation Organization and Israel in 1993 – not a “peace”, but a further entrenchment of the Israeli occupation and apartheid and Arab authoritarianism.

What these deals will not do, however, is to destroy the spirit of the people and their determination to fight in solidarity. One of the images circulating on Bahrain’s social media after the normalization agreement was announced was a mass protest in Bahrain in solidarity with Palestine in 1947, which shows the long history of solidarity with the Palestinian cause.

The Bahraini learn about the Palestinian cause, about the oppression of the Palestinian people and, when allowed, take part in protests against the submission of Palestine. In 2002, for example, they took to the streets to demonstrate in front of the US embassy in solidarity with the Intifada in Palestine. Bahraini police used violence, and in the violence that followed, a man named Mohammed Juma’a al-Shakhouri was killed by a rubber bullet wound to the head.

It is this solidarity that has brought us together – the Bahraini Maryam and the Palestinian Mariam – who can only meet outside of our region to speak confidently about the injustices and oppression and the opportunity to redefine relationships that make the borders more temporary Diplomatic treaties transgress more destructively than productively.

The views expressed in this article are those of the authors and do not necessarily reflect the editorial stance of Al Jazeera.