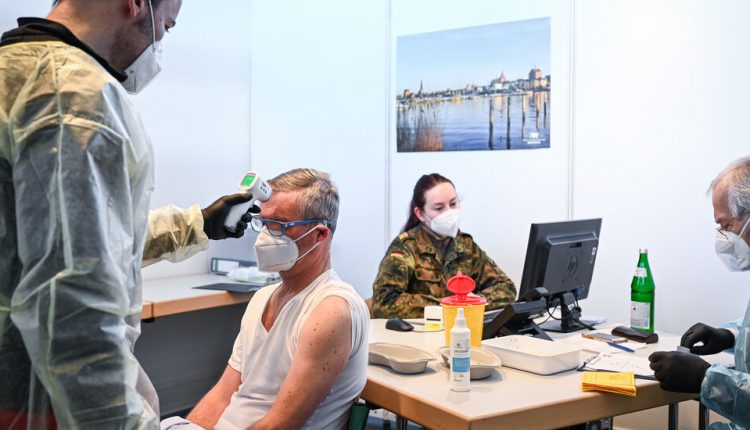 Two weeks after 1.45 million doses of the AstraZeneca vaccine hit Germany, only 270,986 have been given, according to health officials, despite people around the world demanding vaccinations and serious shortages in many countries.

Many Germans – including health workers – skip appointments or refuse to sign up for the AstraZeneca shot, which they fear may be less effective than the one developed by Pfizer and German company BioNTech, officials say.

This reluctance was fueled by weeks of negative coverage in the German media portraying the AstraZeneca vaccine as “second-rate” and posting stories of people suffering from side effects.

By the numbers: Clinical studies suggest that the Pfizer BioNTech shot is 95 percent more effective than AstraZeneca’s, which is between 60 and 90 percent depending on factors such as dose spacing. However, it is difficult to directly compare vaccines if they are not tested directly in the same study.

Armenia, which lost a humiliating and bloody war with its neighbor Azerbaijan last fall, fell into political crisis on Thursday after its prime minister called an “attempted military coup”.

The Fracas recently began when a political opponent accused Prime Minister Nikol Pashinyan of failing to use missiles that could have prevented the loss of Armenia’s territory. The prime minister insisted that he ordered the missiles to be used but that they had failed and the blame was placed on the military.

Mr. Pashinyan dismissed a military officer who contradicted him. On Thursday, the General Staff of the military called for his resignation. Mr. Pashinyan warned of a coup but later softened his language.

Steps towards stability: Early Thursday evening, the generals had issued a new statement that the previous one had not been reconciled with an opposition party.

Facebook said it banned Myanmar’s military from its platforms, leaving no question that the company was campaigning for the country’s pro-democracy movement against the generals who seized power on Feb.1 and ousted civilian leader Daw Aung San Suu Kyi .

Since that coup, the military has repeatedly shut down the internet and blocked access to major social media sites, including Facebook. But the generals still used Facebook to spread propaganda, as well as military-owned companies advertised on the platform. Neither will be allowed now.

Mark Zuckerberg: Although the chief executive of Facebook has long been a champion of free speech, he is increasingly willing to act against what is published on his platform, including cracking down on the QAnon conspiracy theory movement and misinformation from former President Donald Trump .

The riddle of hard butter

A surge in pandemic-inspired baking has helped draw national attention in Canada to a toothy question: why does the country’s butter seem so firm?

One theory is that palm fat in the forage of Canadian dairy cows like those pictured above could be the culprit, a claim dairy farmers deny. Either way, the controversy nicknamed “Buttergate” has spawned social media chatters, conspiracy theories, and scientific rumination.

US air strikes: President Biden ordered retaliatory strikes in Syria against what the Pentagon called the Iran-backed militias behind the recent attacks in Iraq, one of which killed a civilian contractor with the American military coalition led there.

Greece: A pregnant Afghan refugee in Lesbos tried to kill herself by setting her tent on fire on Sunday after her family’s move to Germany was delayed. Greek officials charged them with arson.

Electric cars: The Chinese automaker Nio hopes to dominate the electric car market even if it loses thousands of dollars on each of its products. The key to success is China’s large, well-funded electric vehicle supply chain.

US gymnastics: John Geddert, who coached the US Olympic gymnastics team in 2012, has committed suicide. He had been charged with, among other things, human trafficking and sexual assault on a young girl.

India and Pakistan: The two long-time enemies renewed a ceasefire pledge along their troubled Himalayan border on Thursday. Since the airstrikes in 2019, the communities living there have carried the brunt of the skirmishes and mortar shell from both sides.

Snapshot: A group of hikers above set out to explore the Russian wilderness in 1959. They died under mysterious circumstances, sparking speculation that the KGB (or aliens) could be to blame. Now scientists believe they can prove that the cause was an avalanche.

Gripe card: An anonymous website developer in Yokohama, Japan has created a controversial map that allows people harassed by noisy children to register their complaints. It is their declared aim to help house hunters avoid living near “stupid parents who let their children play on the streets and parking lots”.

Outerwear of the rich and famous: A coat that starts at $ 1,000 has become popular with financiers and movie stars. “My son, who is in New York City, has worn it all winter despite being very anti-materialist and anti-capitalist,” said one high profile fan. “It’s discreet enough.”

What we read: Responses to the New York Times documentary “Framing Britney”. Indulge in these thoughtful plays by Mara Wilson in The Times and Tavi Gevinson in New York, both well acquainted with childhood fame.

See: French middle school students take over the direction of “Un Film Dramatique”, a documentary that was shot over four years in the Paris suburbs. Our review calls it “joyful” and “encouraging”.

Listen: Do you miss live performances by Schubert or Schumann? Here are 10 highlights from the flood of online classical music in March.

Add some flavor to indoor living with our At Home collection of ideas for what to read, cook, see and do while being safe at home.

The 11-month-old invitation-only app, valued at $ 1 billion, delights users by immersing them in various conversations called “rooms”. But from the start it was plagued by controversy. My colleague Kevin Roose dropped out of exams and achievements. Here is an excerpt.

Every successful social network has a lifecycle that looks something like this: Wow, this app is addicting! Check out all the fun and exciting ways people are using it! This platform should really hire some moderators and correct their algorithms. Wow this place is a cesspool, I’ll delete my account.

The remarkable thing about Clubhouse is that it seems to experience this entire cycle all at once for the first year of its existence.

Unlike Facebook and Twitter, the clubhouse is organized more like Reddit – a collection of current rooms with a central “hallway” that users can browse through rooms in progress. Clubhouse rooms disappear after they’re over and recording a room is against the rules.

There are still many similarities, however, including aggressive growth hacking tactics that are designed to pull new users deeper into the app. The app’s reputation for lax moderation has also attracted a number of people who have been banned from other social networks. It has also been scrutinized by governments, particularly those looking to contain dissidents.

Before I get classified as a clubhouse hater, let me sound optimistic. Most of the rooms I’ve been in are polite and well-moderated, and if you roll past the mega-popular rooms with celebrities and hackers, you find some really fascinating things.

I hope Clubhouse survives, if only because it could create a more thoughtful, less outrageous alternative to the social networks we’ve been writing to for the past decade and a half.

That’s it for this briefing. Until next week.

And a correction: Yesterday’s announcement incorrectly stated that Ghana had received 60,000 doses of Covid-19 vaccines as part of the Covax vaccine-sharing program. The correct number is 600,000.

PS
• We hear “The Daily”. Our latest installment is about Merrick B. Garland’s long history in the fight against domestic extremism.
• Here is our mini crossword puzzle and a clue: Wintery Mixture (five letters). You can find all of our puzzles here.
• The Times announced a new project, “Black History, Continued,” to explore black history and culture, led by Editor and Associate Editor of Narrative Projects, Veronica Chambers and Dodai Stewart.