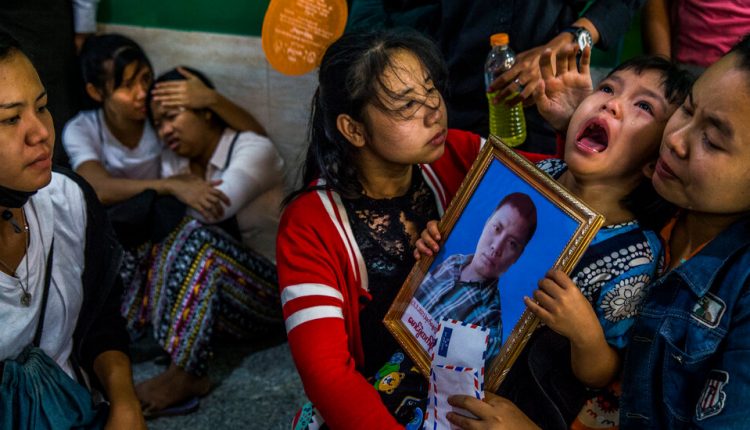 The “heart of darkness” of the Myanmar military

The military and its brutal practices have been on the global scene since last month’s coup. The generals are now fully responsible again, and the Tatmadaw, as the military is called, has turned its arms against the masses who have built a nationwide civil disobedience movement.

But the military has a long legacy of atrocities that has created a pervasive fear in Myanmar.

Over the past three years, the Tatmadaw has waged war against ethnic rebel armies in three states, Rakhine, Shan and Kachin, and displaced 700,000 Rohingya Muslims. Survivors and witnesses have described the campaign to us, which included murders, systematic rape and abuse. Men and boys were often used as human shields by the soldiers.

Sayedul Amin, a 28-year-old Rohingya man, was fishing when he and others were rounded up by soldiers in October. “We were instructed to go before the soldiers,” he said. “It seems they wanted us to protect them when someone attacks.” He was hit by two bullets.

Quote: “This is an army with a heart of darkness,” said David Scott Mathieson, an independent analyst. “This is an unrepentant institution.”

Context: Brutality is rooted in the Tatmadaw. It came to power in a coup in 1962 and said it had to protect national unity. For decades she has been fighting to control parts of the country where minorities live that are rich in jade, wood and other natural resources.

Finances: The Tatmadaw generates income from a lucrative business empire, reports the BBC.

Europe, the US and others have discussed creating their own version of the system in preparation for a likely travel boom as more people get vaccinated. President Xi Jinping of China has called for a standardized, global system, but privacy concerns make this outcome unlikely.

Context: In China, health code software that can track users’ locations and link them to hotspots and outbreaks is rampant in the coronavirus pandemic. A green code showing a clean history is required to perform a range of activities, including entering a grocery store or using public transportation.

A Japanese automaker was the first to produce a mass-produced fully electric car: the Nissan Leaf. Just over a decade later, such cars account for only 3 percent of global sales, with buyers disapproving of their price, limited range, and charging times.

That makes it difficult for automakers to make a profit, and as a result, the Japanese auto industry has neglected electric cars while dominating the global gasoline-electric hybrid market. Automakers around the world are making bold pledges to transition to electric fleets, and national governments are giving mandates to increase sales of electric cars or ban gasoline-burning vehicles. Japan’s auto industry could be left behind.

Power Player: Akio Toyoda, president of Toyota and chairman of the Japan Automobile Manufacturers Association, has accused the Japanese news media of adding to the commercial and environmental value of all-electric vehicles. His company, the global leader in hybrid car sales, sets the tone for the industry. Toyota is also heavily invested in clean-burning hydrogen, a technology that is not yet mainstream.

Echoes of Diana in the royal falling out

A quarter of a century after Princess Diana broke her silence about life under the British kings, Meghan, the Duchess of Sussex, did the same. Their stories were remarkably similar, writes our correspondent.

Prince Harry has often spoken with fear about what happened to his mother when she was expelled from the royal family after her divorce from Prince Charles and later died in a car accident. During the bombing interview on Sunday, he made an explicit comparison when he pointed to the “constant barrage” of criticism and racist attacks against his wife.

Royal family: Buckingham Palace issued a statement Tuesday in response to an explosive interview with Prince Harry and Meghan Markle in which he said the family were “saddened by how challenging the couple have been over the past few years”. The Queen said the issues raised were “very worrying” and were being raised by the family.

Catalan crisis: The European Parliament has stripped the immunity of Carles Puigdemont, the former separatist leader of Catalonia, and cleared the way for Spain to try again to extradite him and bring him to justice for sedition. It is now up to the Belgian judiciary to decide on the return.

Snapshot: Above is the tiny village of Gósol in the Spanish Pyrenees. For years, the mayor had asked outsiders to come to his city to repopulate it. Since the beginning of the coronavirus pandemic, many have made a fresh start – and even saved the school from closing.

What we read: This Atlantic article on how the internet doesn’t have to be terrible.

Cook: These creamy braised white beans are cooked with milk, a whole garlic, herbs, and nutmeg to make a rich vegetarian dinner that can be on the table in under half an hour.

See: A romance between a refugee and an escaped child bride is the focus of the animated film “Bombay Rose”.

Listen: There will be no shortage of well-known matchups in the main categories at the 63rd annual Grammy Awards on Sunday. Beyoncé, Taylor Swift and Dua Lipa dominate the nominations.

For a fascinating book or fabulous recipe, turn to our At Home collection for ideas on what to read, cook, see and do while staying home safe.

Last month, Apple TV + released Billie: The World Is a Little Blurry, a documentary showing the rise of singer Billie Eilish and the making of her Grammy-winning debut album. Other recent documentaries about pop stars like Justin Bieber, Beyoncé and the girl group Blackpink follow.

The artists or their labels helped with the production of all these films, which promise an unvarnished glimpse into the lives of the actors. That’s not quite what they deliver.

Celebrities have long used documentaries to manage their images, even when the production team is technically independent. Music labels are often involved in the documentaries, partly because “Directors have no choice: Films about musicians need music, and licenses can be prohibitively expensive,” writes Danny Funt in the Columbia Journalism Review.

Perhaps the best way to approach celebrity documentaries is to enjoy them for what they are: carefully constructed entertainment. In Eilish’s case, the documentary often feels “almost observational, like a nature film,” writes Times critic Jon Caramanica in a review. Still, he says, “There’s never anything else in this footage but a sense of security.”

As Simran Hans writes in The Guardian, “Artists continue to use the documentary form as an abbreviation for truth – but that truth is yet another construction.”

Thank you
Whet Moser, Carole Landry and Amelia Kidneyberg contributed to today’s briefing. Sanam Yar wrote the backstory. Theodore Kim and Jahaan Singh took the break from the news. You can reach the team at [email protected]

PS
• We listen to “The Daily”. Our latest installment deals with a provision in the U.S. auxiliary bill that provides a child tax credit.
• Here is our mini crossword puzzle and a clue: Dominant Personality (five letters). You can find all of our puzzles here.
• Our Beirut office manager, Ben Hubbard, spoke to Christiane Amanpour on PBS about US-Saudi Arabia relations.