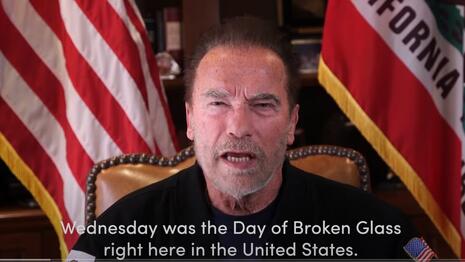 Republicans and Democrats can both agree that what happened at the U.S. Capitol last Wednesday was a shame at best. Unfortunately, leftists have a terrible habit of dividing people, even in the worst of circumstances. The former GOP governor who became a celebrity on the left, Arnold Schwarzenegger, compares the events with the Kristallnacht and calls Trump the “worst president of all time”.

On January 10, Schwarzenegger went to Twitter to post a seven-minute video about the storm on the U.S. Capitol. While of course condemning the January 6th actions, he went further to compare the event to Germany and Austria’s Kristallnacht, or the Night of the Broken Glass.

My message to my fellow Americans and friends around the world following this week’s attack on the Capitol. pic.twitter.com/blOy35LWJ5

“Wednesday was the broken glass night here in the US. The broken glass was in the windows of the United States Capitol. But not only did the mob break the Capitol windows, but also the ideas we took for granted. You have trampled on the very principles on which our country was founded. “

Kristallnacht refers to the night on November 9, 1938, when Nazis destroyed Jewish homes, schools, and businesses across Germany and Austria at the height of Hitler’s power. Although the actions on Wednesday were horrific, they do not represent an emerging Nazi force. In contrast to Kristallnacht or even the BLM riots, these actions were largely condemned without racist or Semitic goals. Given that Schwarzenegger points out that his father was present during Kristallnacht, you’d think he’d be more tactful about comparing them.

This led to the ultimate goal of this video: Donald Trump. Schwarzenegger stressed that President Trump is a failed leader who “will go down in history as the worst president of all time” after these events. He also offers his support to President-Elect Joe Biden to “bring us together”. Somehow, he believed that calling a man who received 70 million votes “the worst president ever” would bring people together. No wonder he supports Joe Biden.

America can hopefully put the events of last week behind it, but it definitely will not happen with the help of Conan the Barbarian.