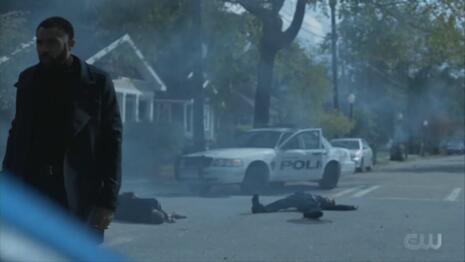 The superhero shows on the CW have returned for 2021, and with them come all the usual clichés. Good guys fight bad guys, lots of special effects and of course the obvious liberal agenda. The season four premiere of Black Lightning does all of that with a scene promoting the Black Lives Matter narrative and the return of the old MAGA treatment. That is, only bad guys ever want to make something “great again”.

The premiere on February 8, “The Book of Reconstruction: Chapter One” begins about a year after the finale of last season. Both after the takeover of the militia and after the invasion of foreigners, the fictional city of Freeland has seen better days. Citizens, however, are soon getting help from an unexpected source: former corrupt politician and enemy of Black Lightning, Tobias Whale (Marvin “Krondon” Jones III).

Despite being previously arrested by the government, Whale is back to “make Freeland great again”. Needless to say, Jefferson Pierce / Black Lightning (Cress Williams) and his family aren’t happy about this.

Reporter: In an exclusive interview with reporter John Webb, he speaks to the reclusive businessman Tobias Whale about his philanthropy and his commitment to rebuilding the city of Freeland.

Tobias: John, I love Freeland. I have always. And whatever it takes to get her back on her feet, I’ll do it.

John: What does that mean exactly?

Tobias: Well, so far we have already started working with the mayor’s office and I have allocated a significant amount of money to help repair and rebuild public facilities that were damaged during the war.

Jeff: What the hell?

Lynn: I thought he was dead?

Anissa: And you think it’s a coincidence that he shows up now?

Tobias: … But when he saw my budget, he knew that I was fully committed and ready to make Freeland great again.

Anissa: Congratulations on the anniversary.

So many superhero shows have pulled that stupid nonsense “Make Blank Great Again” is evil. Heck, Black Lightning did that shtick almost three years ago. It wasn’t wise then and now that Trump is out of office, it’s just dumber. How much longer do we really have to deal with it?

Black Lightning barely rises above this terrible reference for the rest of the episode. In the beginning, Jeff comes across two white cops (what else?) Harassing a black teenager for being black. It’s so over the top ridiculous that the teen innocently even carries a violin and the cops pull out their guns and point them at Jeff from the other side of the intersection, simply because he doesn’t get back in his vehicle. Out of anger, he violently blows the two men up with his strength.

Officer: Hey, where are the drugs? Hello! Come here.

Boy: I didn’t do anything!

Jeff: Whoa, whoa, whoa! Hey hey Is it all necessary?

Officer: Hey, get back in your car, sir.

Jeff: Look, I know this kid. It wouldn’t hurt a fly. So what did he do to deserve this?

Officer: This is your final warning, sir. Get back in your vehicle. Now!

Officer 2: Get back in your vehicle now!

Jeff: Are you going to point a gun at me now?

Officer: I told you to get back in your car.

Jeff: Do I look armed to you? I’m so sorry

It’s hard to believe that this guy is supposed to be the hero. The hero of Black Lives Matter against maybe cartoonish bad police officers, but not against the public. With that backward-looking view of justice, it looks like Black Lightning will end its final season as politically and viciously as ever.

This episode was sponsored by commercials from Progressive, Toyota, and Geico.

Elon Musk Plans to Write a Guide About Tesla and SpaceX