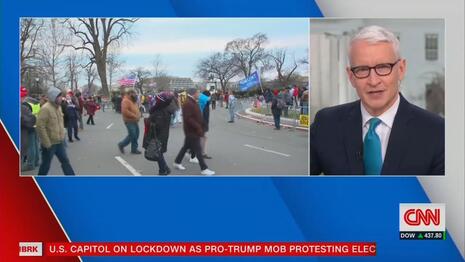 CNN star Anderson Cooper, son of famed and over-the-top fashion designer Gloria Vanderbilt, sometimes can’t help it when his white-haired privilege brings out the best in him. On Wednesday, immediately following the riot at the Capitol in Jake Tapper hour, Cooper came to the obvious conclusion that the riot at the Capitol was unfortunate, adding that the Deplorables then went to the olive garden to celebrate.

ANDERSON COOPER: Can I just say we are looking at these pictures of people, some of whom are leaving the Capitol grounds, wandering back, smiling at each other, very pleased with themselves for what they did today. And it’s really just outrageous and pathetic. Each of these people should be shamed for what they did today. We should look at their faces, and when I stood on this street – look at them. They are mutually haughty for this deplorable portrayal of completely unpatriotic, completely contrary to law and order, completely unconstitutional behavior.

And then Anderson Vanderbilt broke out:

It’s breathtaking. And they’ll go back to the Olive Garden and their Holiday Inn where they stay at the Garden Marriott and they’ll have a drink and talk about the great day they lived in Washington and they really did something and stood up for something and they campaigned for nothing but chaos. And a man who finds himself in the despicable days of a failed presidency.

Her first thought: Are the Holiday Inns and Garden Marriotts playing CNN for their guests at breakfast? Or will they all switch to Fox News now? Does the Olive Garden advertise on CNN? Why should they now?

Unrest should never be celebrated as an achievement. It should not be glorified as “rebellion” or “revolution” or “social change”. But does anyone remember Cooper belittling rioters in Seattle or Portland and mocking them when they celebrated their mayhem in a vegan shisha lounge? Create any offensive lifestyle stereotype you want. All rioters can be called without making fun of their imaginary choice of restaurants and hotels.

(When riots broke out last June, the New York Times reported that Cooper called the president a “thug,” not the rioters. “The president seems to believe that it is law and order to dominate black people and peaceful protesters.” Cooper told his liberal viewers, “He calls them” thugs. “Who’s the thug here? Hiding in a bunker and hiding behind a suit. Who’s the thug?” There was only one lecture at Trump, not that Rioters. They were demonstrators who deserved answers.)

Of course, Fox News has put snobbery in the Olive Garden into a heavy rotation. Fox reporter Brian Flood covered Tucker Carlson Tonight, and former CNN digital editor Steve Krakauer was crying badly. “Anderson Cooper, you know, before that he said those rioters who were criminals should be put to shame, and I agree. And then he goes on and it’s really when the veil falls, isn’t it? It used to be what we don’t really talk about. This contempt not only for Donald Trump, but also for Trump supporters and for those who voted for him. “

He added, “The olive garden and the Holiday Inn, I mean, it’s just so gross and honest, it’s so self-destructive. It’s so transparent and it’s really unhappy. The olive garden is delicious. There’s nothing wrong with it when People eat in it. ” the olive garden. “