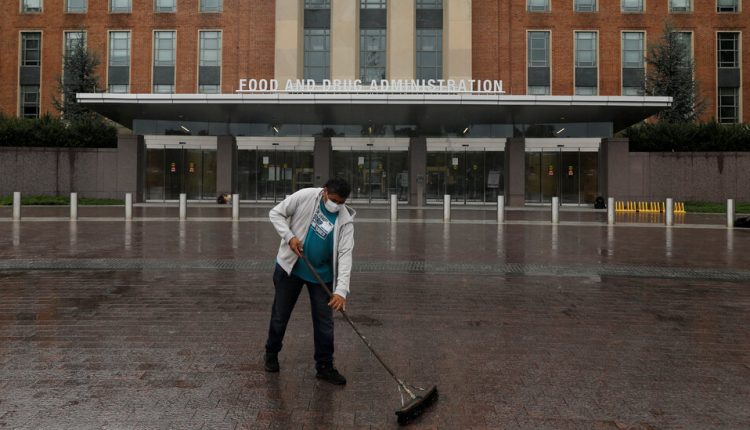 The Food and Drug Administration on Friday authorized the coronavirus vaccine made by Moderna for emergency use, allowing the shipment of millions more doses across the nation and intensifying the debate over who will be next in line to get inoculated.

The move will make Moderna’s vaccine the second to reach the American public, after the one by Pfizer and BioNTech, which was authorized just one week ago.

The F.D.A.’s decision sets the stage for a weekend spectacle of trucks rolling out as expert committees begin a new round of discussions weighing whether the next wave of vaccinations should go to essential workers, or to people 65 and older, and people with conditions that increase their risk of becoming severely ill from Covid-19.

Jockeying for the next shots in January and February has already begun, even though there is still not enough of the two vaccines for all the health care workers and nursing home staff members and residents given first priority. Uber drivers, restaurant employees, morticians and barbers are among those lobbying states to include them in the next round along with those in the more traditional categories of the nation’s 80 million essential workers, like teachers and bus drivers.

The rapid progress from lab to human trials to public inoculation has been almost revolutionary, spurred by the nation’s urgent need to blunt the pandemic that has broken record after record in U.S. deaths, hospitalizations and economic losses. In the last week alone, there has been an average of 213,165 cases per day, an increase of 18 percent from the average two weeks earlier. And the daily death toll in recent days has surpassed 3,200.

Dr. Anthony S. Fauci, the nation’s top infectious disease expert, said in an interview Friday evening that the advent of two vaccines was “an historic moment.”

“This to me is a triumph of multiyear investment in biomedical research that culminated in something that was not only done in record time, in the sense of never before has anybody even imagined you would get vaccines to people in less than a year from the time that the sequence was made known,” Dr. Fauci said.

“This is an example of government working. It worked really well,” he added.

Moderna, a company based in Cambridge, Mass., worked with Dr. Fauci’s agency at the National Institutes of Health to create a vaccine that, along with Pfizer-BioNTech’s, shepherds in a new technology based on genetic material called messenger RNA or mRNA. In clinical trials in tens of thousands of volunteers, the vaccines proved 94 to 95 percent effective. Each requires two shots.

Both products are reaching an anxious public before vaccines made with traditional approaches, and have become even more critical as other companies’ efforts have faltered in recent months.

The emergency authorization kicks off a swift and complex drive to distribute some 5.9 million doses of the Moderna vaccine around the country, with shipping to begin on Sunday and deliveries starting on Monday. The first Moderna vaccinations could then be given hours later.

Because Moderna’s vaccine, unlike Pfizer-BioNTech’s, does not need extreme-cold storage and is delivered in smaller batches, states are hoping to provide it to less populated areas, reaching rural hospitals, local health departments and community health centers that were not at the top of the distribution list.

Three places that did not receive the Pfizer-BioNTech vaccine — the Marshall Islands, Micronesia and Palau — will receive the Moderna vaccine for that reason, according to a federal health official familiar with the government’s distribution plans.

And in contrast to Pfizer’s rollout last week, the Moderna vaccine deliveries will be managed by the federal government under the funding of Operation Warp Speed, the administration’s program to develop and distribute vaccines as fast as possible.

Supplies of a second vaccine cannot come soon enough. Several governors and state health officials said on Friday that they were dismayed to learn they would be getting less of the Pfizer-BioNTech vaccine next week than the federal government had promised.

Dr. Mark Levine, commissioner of the Vermont Department of Health, said in a Friday briefing: “All my colleagues in the region are reporting a 25 to 35 percent decrease in their allocation for next week. As we were walking in, I learned as many as 975 doses out of an expected 5,850 doses would not be coming in when we expected. That doesn’t mean we won’t be getting all of those doses. It just means they won’t be coming in when we expected.”

He added, “What everyone around the country is upset about, in addition to just the number, is there’s been no communication, so there’s no understanding of what this really means.”

Gov. Charlie Baker of Massachusetts said on Friday, “We’re certainly frustrated,” referring to the reduced number of Pfizer-BioNTech doses his state would receive next week — 42,900 instead of 59,000. Demand for the vaccine is high.

“So far, hospitals are reporting overwhelming acceptance from doctors, nurses and other workers who are eligible to be vaccinated,” he said.

Answers to Your Vaccine Questions

With distribution of a coronavirus vaccine beginning in the U.S., here are answers to some questions you may be wondering about:

Pointing out how hard hit Wisconsin has been, Gov. Tony Evers complained that the state was receiving significantly less of the Pfizer-BioNTech vaccine than it had been promised — 35,100 doses instead of 49,725. In a statement on Friday, he said, “We call on the federal government to send us more vaccine without delay.”

Because Moderna’s vaccine requires two doses, federal officials are holding another 5.9 million doses for shipment four weeks after the first wave, as the doses are spaced a month apart. The federal government also plans to reserve more than 500,000 doses in case of problems with the initial shipment.

Officials expect to inform states next week the number of doses they plan to send in the second wave of shipments.

The emergency authorization Friday was the product of an F.D.A. review process that compressed an extraordinary amount of work into weeks, and occurred at the same time regulators were poring over materials for the Pfizer-BioNTech vaccine.

The overlap led to a grueling schedule for the reviewers. Large teams organized into specialties — epidemiology, statistics and manufacturing among them — and reviewed Moderna’s application day and night once the company submitted its data in late November.

Among the review’s components were teams that examined company production facilities and clinical trial sites to affirm that records corresponded to the materials Moderna had submitted to federal regulators.

Looming over the F.D.A. in recent weeks has been the prospect of political influence on the agency’s review of both vaccines. President Trump has publicly ridiculed and pressured Dr. Stephen M. Hahn, the F.D.A. commissioner, to speed authorization.

Dr. Hahn on Friday tried to distance the agency from any perceived meddling.

“We worked quickly, based on the urgency of this global pandemic, not because of any external pressure,” he said in a news briefing shortly after the authorization was announced. “We have not cut corners, but rather have cut through regulatory red tape that can sometimes slow down the process.”

The F.D.A.’s advisory panel also had to consider new information — reports of severe allergic reactions, two in Britain and two in the United States, in people who received the Pfizer-BioNTech vaccine after it was authorized. Although that vaccine is not identical to Moderna’s, they are similar. The agency and the Centers for Disease Control and Prevention are investigating the cases, but say the vaccines can be safely administered to most people who have allergies, with careful monitoring.

In the Friday night briefing, the F.D.A.’s top vaccine regulator, Dr. Peter Marks, said that there were about five cases under investigation across the country.

Dr. Marks said that it was “dangerous” for him to speculate about the cause of the reactions, but mentioned a possible link between rare allergic responses and polyethylene glycol, an ingredient in both vaccines but in different formulations. The reactions have occurred in people who got the Pfizer vaccine in its first weeks of a public rollout.

The F.D.A.’s authorization also represented a capstone to a sprawling government-led effort that began in January, when scientists at N.I.H. and Moderna designed the vaccine within two days of China’s releasing the genetic sequence of the new virus.

The company had never brought a product to market, giving it an underdog status as its vaccine was tested on the same timetable as Pfizer-BioNTech’s. Moderna enjoyed an unusually intimate relationship with Operation Warp Speed, which has monitored its supply on an almost hourly basis this year. The company benefited from nearly $2.5 billion in federal funds used to buy raw materials, expand its factory and enlarge its work force by 50 percent.

Public health experts and federal officials still estimate that it will be at least six months, if not longer, before most Americans can be vaccinated. And that depends on whether other vaccines in trials are successful and receive emergency approval.

The federal government is counting on building supplies from vaccines under development by several others — one from Johnson & Johnson, one from Sanofi of France and GlaxoSmithKline of Britain, and another from the British-Swedish drug maker AstraZeneca and the University of Oxford.

On Saturday and Sunday, experts advising the C.D.C. will take up Moderna’s vaccine and ultimately vote on the next tiers of people who should get the vaccines. The committee vote on Sunday will most likely set off a frenzy of difficult decision-making at the state level that could be further complicated by bumps in the vaccine production process.

Behind the scenes is McKesson, based in Irving, Texas, one of the country’s largest distributors of drugs and medical supplies. The company has a long history of distributing vaccines and is the largest distributor of the seasonal flu vaccine in the United States.

McKesson also played a central role in the opioid epidemic and is part of a group of companies closing in on a potential $26 billion settlement with state and local governments.

The company will be the main distributor of the Moderna vaccine. Pfizer-BioNTech itself is distributing its vaccine, which needs to be kept at minus 94 degrees Fahrenheit.

McKesson is also producing kits that include the supplies needed to administer both vaccines.

McKesson is assembling the kits at two of its distribution centers, one near Louisville, Ky., a major hub for UPS, and another near Memphis, where FedEx is based.

While McKesson has its own fleet of trucks, it is largely relying on FedEx and UPS to ship the kits and vaccines.

McKesson has outfitted at least two of its distribution centers with specially designed, 10,000-square-foot freezers designed to store millions of doses of the Moderna vaccine. Altogether, McKesson has added more than 3.3 million square feet of space to manage the project.

When the time comes to send the Moderna doses out, McKesson will pack the doses into coolers it sourced from Cold Chain Technologies, a company in Franklin, Mass. Those coolers will be packed with coolant packs, and then sent to administration sites via FedEx and UPS. The coolers also contain monitoring devices that indicate whether the vaccines ever got too warm.

McKesson has hired more than 1,000 people to help with the effort, and expects to hire up more than 2,500 more in the months ahead.