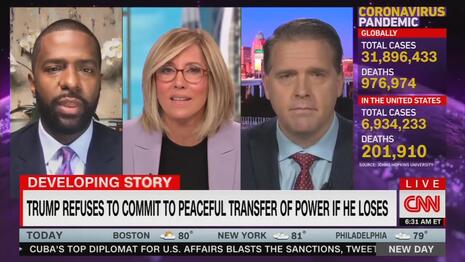 It’s common for New Day co-host Alisyn Camerota to obsess and skew President Trump’s comments. Now it is escalating to just making up false quotes to advance the interests of the Democratic Party. “What he said yesterday, it basically sounded like he was okay with violence. If he loses, he is okay with violence. … He’s okay with it as long as he gets what he wants, ”Camerota falsely proclaimed on the morning show.

During President Trump’s press conference on Wednesday afternoon, left-wing Playboy reporter and former CNN political scientist Brian Karem posed a key question on whether the president will support a peaceful change of power in November amid the unrest that is currently raging across major cities. Trump said it depends and spoke on the integrity of the elections.

It should be noted that in his reply to Mr Karem, the President did not even refer to the riots, but that the reporter raised them. This didn’t stop Camerota.

During the segment, Camerota got frantic, raising her voice and cutting off her guests to argue that President Trump wanted violence. When political commentator Scott Jennings said he felt there would be a peaceful transition, she exclaimed, “Why ?! Why do you think that, Scott, when the president says it’s conditional? “This went from an attack on President Trump’s comments to an open portrayal of a false narrative.

This is part of the continued efforts of the New Day hosts to support Democratic candidate Joe Biden and to ensure he wins the presidency. The theme was not “We have to ensure a fair election, a peaceful transition regardless of the election result”, but rather “Trump will lose and we have to make sure he leaves peacefully”. Bakari Sellers openly stated: “[Trump] will not be the valid winner after all ballots are counted. “It appears that CNN also decided the election results before the votes were cast or counted.

Former Democratic nominee Hillary Clinton advised Biden “under no circumstances to admit, and Biden himself hires hundreds of lawyers to prepare to question the results if he loses. Why aren’t the CNN hosts hysterical about whether or not he’ll accept the election result?

Not only does CNN create a narrative that Trump is for violence if he loses, they do exactly what they blame him for. They claim if Joe Biden doesn’t win the White House this November, the results will not be legitimate.

ALISYN CAMEROTA: President Trump just told us that a peaceful transfer of power is conditional on him. Only when he gets what he wants. Mitt Romney is one of the people who take the President very seriously about these comments. He tweeted that the peaceful transfer of power is fundamental to democracy. Without that, there is Belarus. Any suggestion that a president should not respect this constitutional guarantee is unthinkable and unacceptable. Also included are CNN’s political commentators Bakari Sellers and Scott Jennings. Nice to have you both here. Bakari, what did you hear in the President’s words?

BAKARI SELLER [CNN Political Commentator]: Well, I think it’s something to be very scared of. The president in his head just believes that either he wins the election or the election has been rigged. There is no third alternative there. But Democrats, we need to calm down. I hear this question a lot, do you know what happens when he doesn’t leave? We have to hit him first. And I think we need to focus on the hand that hits the President of the United States and hits him hard.

CAMEROTA: I don’t know if it’s important, Bakari. What he said yesterday, it basically sounded like he was okay with violence. If he loses, he is okay with violence. When Brian Karem said but there is riot in the streets and he said let go of the vote. He’s okay with it as long as he gets what he wants.

Seller: We know he’s okay with his type of violence. We know that he is okay with violence carried out on his behalf. This is not new. But I want people to focus on what I want to focus on in the next 40 days. None of this will matter if he doesn’t lose that choice. So you need to focus on what you can control now. I believe that on January 20th, and this is my belief in this country and my belief in democracy, everyone who loses will ride out of the White House with whoever is the former president or who loses the election, and we will have a peaceful transfer of power regardless of what the president may say.

CAMEROTA: Scott, what did you hear in the President’s comments?

SCOTT JENNINGS [CNN Political Commentator]: There is only one answer to this question, and of course that means we will have a peaceful change of power. I agree with Senator Romney. Any suggestion to the contrary is not correct. And nobody should make it. It is the wrong answer. The President raised these questions about the postal ballot papers and this is not a new subject to him. But deviating from this question and then trying to talk about it in the same breath was a big mistake yesterday. And my suspicion, it reminds me of a few weeks ago, Alisyn, when he was talking about it, maybe we should postpone the election, and you had united the elected leadership and the leadership of both parties by saying this will not happen, and that was quickly abandoned. I think if he holds on to that you will see the leaders of both parties come together on a message that this is not going to happen, Mr President.

JENNINGS: By the way, I agree with Bakari. I think we will have a peaceful transition –

KAMEROTA: Why ?! Why do you think that, Scott, when the president says it’s conditional?

JENNINGS: Because the President of the United States doesn’t have the ability to simply turn all the traditions and history that we have in this land of peaceful change of power on its head. Not me —

CAMEROTA: But he does – Scott, I want you to help everyone feel better –

CAMEROTA: But I’m talking about –

SELLER: The Secret Service will come in –

CAMEROTA: – but what he’s doing is discouraging his supporters. He doesn’t say he’s activating the military. He gets his passionate followers to take to the streets. That is why Brian Karem says there is rioting on the streets. And the president says, well, get rid of the ballots and it’ll be peaceful. He likes the riot in the streets, he says.

Seller: I don’t agree with that.

CAMEROTA: How can anyone stop that?

CAMEROTA: I’m not really talking about him staying in the White House. I think there has been a bigger problem since yesterday. I don’t think our biggest concern is that he only establishes the rights of squatters in the White House, Scott. I really don’t. I think he is now open to business when it comes to violence. He said that too. Scott?

JENNINGS: Yeah, I didn’t hear him talk about violence yesterday. I heard him give a very, very bad answer to a valid question. And so I think you’re reading something he didn’t say. I would —

CAMEROTA: He definitely didn’t turn it off.

JENNINGS: – Bakari made a good point about the period between election night and the few weeks that are still going on. Because because of the voting systems in several states, it is clear that we will be counting the ballots for a period of time. So we have to have a valid winner. And we will have a valid winner. And that should be the point. And every vote should count. Anyone who casts a legal ballot should have their votes counted, and when we count those votes we should have a legal and valid winner. And that’s the process we should want. And when it’s over we’ll pass That is the message and not more complicated.

CAMEROTA: I hope you are right. I hope. I like how confident you are. I hope it’s right.

Is Amazon the Proper Place to Promote My Merchandise?