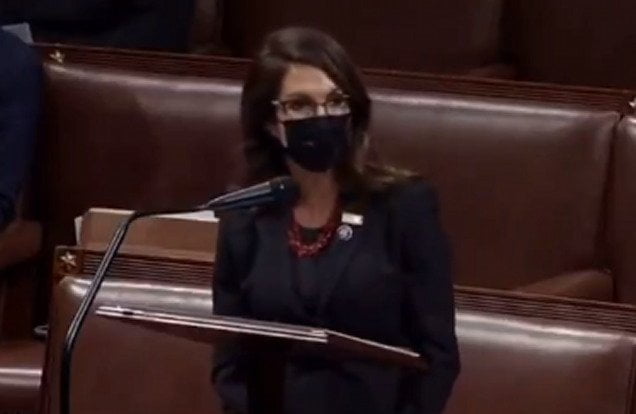 Lauren Boebert, the new Republican Representative from Colorado, called on the Democrats to indict Trump again this week.

She noted that people across the country are still suffering and that all Democrats who care are pursuing their hatred of Trump.

She even called it “Bull Crap” on the floor of the house.

MP Lauren Boebert (R-CO) walked into the house on Wednesday, where she called on the Democrats to work to support political violence.

Boebert’s remarks came as the House debated left-wing impeachment efforts against President Donald Trump in its final days in office.

“Madam Speaker, I stand up today to oppose this impeachment and denounce the recent violence against the Capitol, just as I oppose the impeachment and the violence we have all witnessed in our great country over the summer, have pronounced, “said Boebert.

“Where is accountability for the left after promoting and normalizing violence? Instead of helping the Americans during this time, we are starting impeachments that further divide our country, ”said Boebert. “I call it bull crap.”

Wow rep @laurenboebert killed it on the floor of the house today and said exactly how we all feel 👏🏾👏🏾👏🏾 pic.twitter.com/F72JfMgiQi

I voted against the frivolous impeachment today.

It will be nice if the Democrats can stop this stupidity so we can work on behalf of the American people.

Charging a president with seven days left in office is a colossal waste of time.

Since everyone is talking about inciting violence, here is a relevant video. pic.twitter.com/p71N4uyJPf

She just got into the office and is already striking back. Good for you.