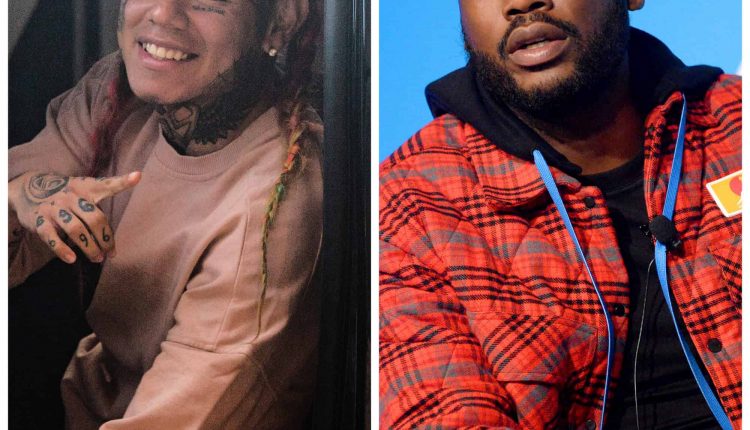 There wasn’t much love before Valentine’s Day, at least in Atlanta, where Meek Mill and Tekashi 69 got into a heated exchange in the wee hours of the morning that wasn’t full of a physical fight.

While it appeared the two men happened to meet in the parking lot near the club, Meek now claims Tekashi purposely targeted him in order to set him up through a physical altercation.

Meek says he ran to his car, presumably with his crew and security, when Tekashi showed up and started yelling at him.

The two rappers and their respective security teams got into a screaming match in which Tekashi 69 accused Meek Mill of collaborating with the cops.

In Meek’s version of the exchange, he claims the government sent Tekashi to “take me out”.

“The government sent him to get me out. I had to spit on him to get him to withdraw. He really was waiting for me outside the club. I thought I was dreaming about WTF,” Meek Mills’ caption read.

From Tekashi’s point of view, he claims that he exposed Meek as a false gangsta.

Meek has doubled his version of events in a series of tweets.

“Why did he choose meeeee wtf lol,” read one of Meek’s tweets.

“We didn’t meet when I got into my car, he just got out … we almost smoked on that 69 pack, out of love for a viral moment … the Tryna locked something up without a cap lol”, read another.

Shortly after that verbal sparring game, both rappers removed the video evidence from their respective social media accounts, but we captured the exchange before it was deleted:

The two had a history of the shadow, and Meek heavily criticized Tekashi for his collaboration with the government in Tekashi’s federal struggle.

We’re glad things didn’t get physical and while we don’t see these two reconciling like Meek Drake in the future, hopefully they can just ignore each other to keep the peace.

We’ll keep you up to date.

Myanmar Navy Tightens Management in In a single day Crackdown

Do You Wish to Be More healthy? Keep Linked With Mates.