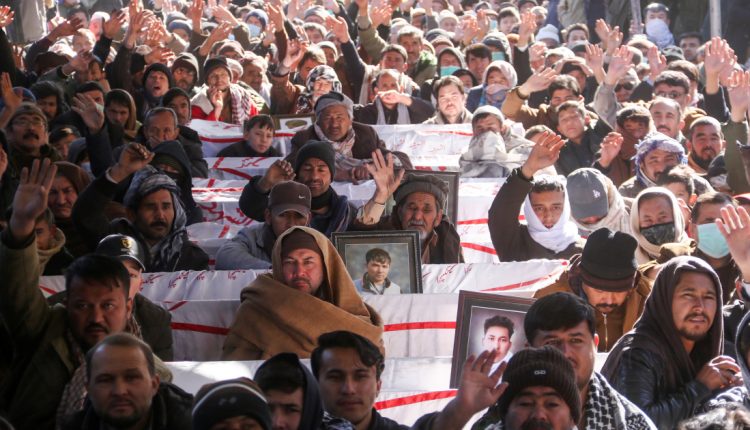 The protesters held a sit-in after the ISIL group captured and shot the miners in Machh east of Quetta last Sunday.

Hundreds of Shiite Pakistanis gathered on Saturday to bury 11 miners from the Hazara community who were killed by the armed group ISIL (ISIS). This ended a week of protests aimed at highlighting the plight of the minority.

Protesters held a sit-in after ISIL militants captured and shot the miners last Sunday in Machh, an area 17 km east of Quetta, capital of the troubled Balochistan province of Pakistan.

Shiites across the country took part in the demonstrations – including roadblocks in major cities – and urged Prime Minister Imran Khan to visit the grieving community in Quetta and seek protection.

Ethnic Hazaras make up the majority of the Shiite population in Quetta. Balochistan is the largest and poorest region in the country with numerous ethnic, sectarian and separatist uprisings.

Their Central Asian characteristics make them easy targets for Sunni attackers whom they consider heretics.

Authorities on Friday promised to arrest the attackers, pay compensation to the bereaved and provide better security for the Hazara.

More than 4,000 people took part in the final rites of the dead miners, whose bodies were laid to rest under tight security six days after their death.

“The provincial government will form a joint investigation team to recommend action against those found guilty of negligence that led to the incident,” said an agreement, a copy of which was received by the AFP news agency.

The agreement also envisaged the establishment of a high-level commission, headed by Balochistan’s Interior Minister, to investigate the attacks against the Hazara community over the past 22 years.

On Friday, Khan appealed to protesters not to link the miners’ funeral with his visit to Quetta and vowed he would come afterwards. According to Islamic tradition, burials take place as soon as possible after death.

“No country’s prime minister should be blackmailed like this,” Khan said on TV announcements.

Dozens of Shiites gathered in the capital Islamabad on Friday and denounced Khan for calling the blackmailers of the mourners.

The prime minister’s office said Saturday that Khan had flown to Quetta and is expected to arrive shortly.

The Prime Minister had already dispatched a group of ministers and top officials to negotiate with the Hazara community, prompting the mourners to agree to a funeral.

Violent attacks against Shiites and other religious minorities remain a serious problem in Sunni-majority Pakistan.

Before coming to power in 2018, Khan often criticized Pakistani leaders for not doing more to stop attacks on the Hazara minority and for not rushing to Quetta to offer their condolences after similar attacks to pronounce.

The ISIL group kidnapped the miners in Balochistan on Sunday and then shot them.

Police video of their bodies showed the miners were blindfolded and hands tied behind their backs before they were shot.

The ISIL subsidiary immediately took responsibility and since then the authorities have searched hideouts to arrest those who orchestrated the killings, despite Khan insisting that Pakistan’s neighbor India was behind the violence in Balochistan.

Stephen Colbert Wearily Recaps ‘The Week That Felt Like A Yr’ – .