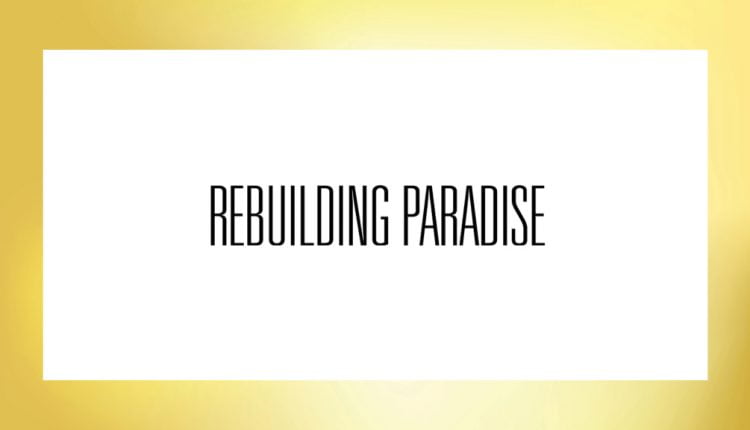 The California city of Paradise was home to around 26,000 people in November 2018 when catastrophic wildfire turned most of the city to ashes. Ron Howard’s National Geographic documentary Rebuilding Paradise begins with footage of the community ablaze.

“This opening sequence is far more terrifying than anything I’ve ever directed as a screenplay director,” said Howard during .’s Contenders Documentary awards ceremony. “Suddenly this beautiful city is being destroyed … in just three hours.”

As the title suggests, Rebuilding Paradise isn’t so much focused on the fire as it is on the aftermath – the sequence of challenges the community faced.

“There was one surprise after another for everyone in Paradise – all the burned trees that had to be felled because it wasn’t safe … There was gasoline that got into the water when the pipes were heated,” says producer Xan Parker Notes. “Lots of people … weren’t insured.”

Michelle John, featured in the film, was among many locals who refused to leave paradise.

“We raised our children there,” she says. “I worked for the school district and saw everyone grow up. The police chief was in my kindergarten class … This is where we belong and you don’t leave your family in difficult times. “

Howard says there are lessons to be learned from Paradise – about people who look out for one another in times of crisis.

“It wasn’t about rugged individualism,” says Howard. “It was about ‘let’s put our other differences aside and look at this thing that is right here before us and that we all share.’ ”