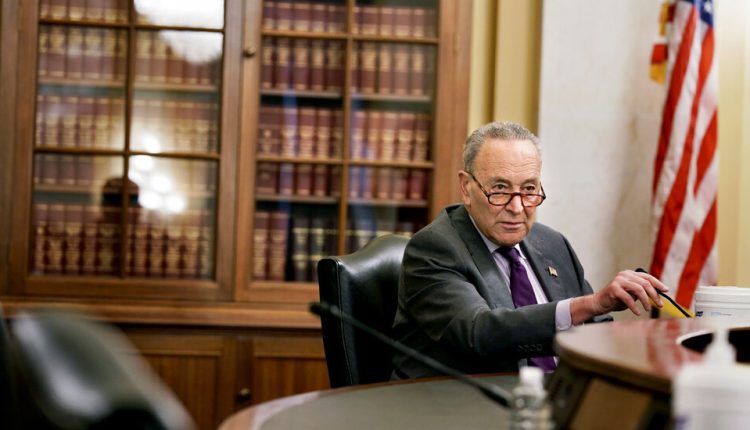 The Senate took its first steps on Wednesday to advance one of the Democrats’ top legislative priorities. He has called an opening hearing on a comprehensive electoral law designed to expand voting rights and undo efforts by some Republican lawmakers to restrict access to the ballot box.

The bill, titled “For the People Act,” is full of liberal priorities and would introduce landmark changes that would facilitate voting, pass new campaign funding laws, and end partisan wandering in congressional districts. The House passed the legislation at the beginning of this month on a party-political basis. Republicans who are working to restrict access to ballot papers and who argue that the bill is a Democratic takeover have met fierce opposition.

“Today, in the 21st century, there is a concerted nationwide effort to restrict citizens’ suffrage and truly have a voice in their own government,” said Senator Chuck Schumer, Democrat of New York and majority leader.

He called the voting setbacks in the states an “existential threat to our democracy”, reminiscent of Jim Crow’s segregationist laws, and sang “Shame!” Shame! Shame! “To the Republicans who promote it.

The Republicans are just as adamant in their opposition to a measure that promises to be an extraordinarily difficult upswing for the Democrats. They call it an attempt by the Democrats to gain permanent political advantage by increasing voter turnout among minority groups and preventing Republicans, who control the majority of state houses, from drawing new congressional districts this year to fill the field would affect their favor.

“This bill is the most dangerous bill this committee has ever considered,” said Senator Ted Cruz, Republican of Texas. “This bill is designed to permanently corrupt the electoral process and is a brazen and shameless takeover by Democrats.”

He falsely claimed that the bill would register millions of undocumented immigrants to vote, and accused the Democrats of having the most violent criminals cast ballots too. In fact, it is illegal for non-citizens to vote, and the bill would not change that or a requirement that people who register to vote swear to be citizens. It would expand the franchise to millions of ex-felons, as some states are already doing, but only after they’ve met their conditions.

So far, not a single Republican has endorsed the nearly 800-page bill, and Democrats are unlikely to get support from even all 50 of their senators without substantial changes.

Increasingly, the Democrats’ best hope of getting the legislation into effect seems to be to use their electoral protection, which many liberals enjoy not only for American democracy but also for their own political chances in the future as a matter of life or death view of death triggering the so-called nuclear option of the Senate: The abolition of the filibuster rule requires 60 votes instead of a simple majority in order to move most of the bills forward. But even that remains unattainable for the time being as long as conservative Democrats in the 50:50 Senate are against it.

Two former republican chairmen of the federal election commission also testified in the opposition on Wednesday. Republicans were particularly opposed to changes that would transform the body that governs federal elections from a bipartisan and largely toothless entity into a more partisan and punitive one.

The bill proposes that the FEC be restructured from an evenly divided, bipartisan body into one with an odd number of members, where a chairman chosen by the president would effectively take control.