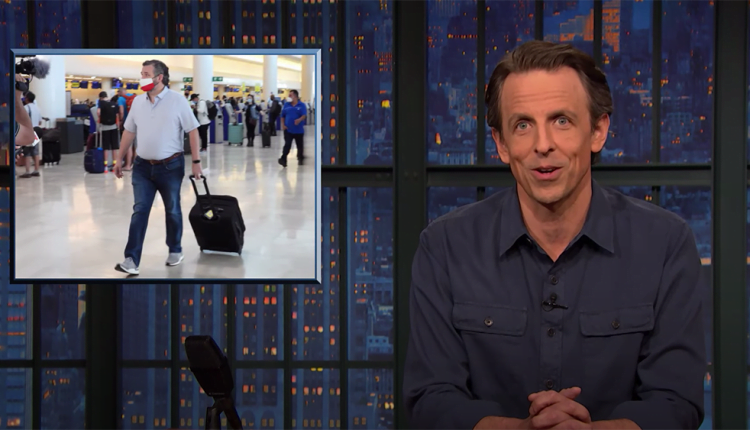 Ted Cruz gave Texas residents the cold shoulder when he traveled to Cancun while residents of the Lone Star State faced a harsh winter storm that killed at least 58 people and thousands more without electricity or water. Trevor Noah, Stephen Colbert and Seth Meyers tore up the GOP character and his explanations for his absence at the crucial moments of the state.

“You know what they’re saying when things get tough, Ted Cruz gets away,” Colbert quipped during his monologue on The Late Show on Monday.

When he opened, Colbert delved into the various layers behind the GOP Senator’s controversial moment, from throwing his daughters under the bus to changing his return flight after even flying to Cancun.

After Cancun received a backlash for his trip, he stated that he went to Mexico to be a “good father” to his two daughters and that he regretted going on vacation. Like many others, however, Colbert was quick to reject Cruz’s statement.

“Too late, Teddy, you’ve already done the bad,” he said.

During his A Closer Look segment, Seth Meyers said he called Cruz “LaGuardia (airport) of the people” and cited the infamous New York travel hub. While Meyers also questioned the legality of Cruz’s apology, he also cut into the Texas Senator’s photo op.

Just days after Cruz was spotted en route to Cancun, he posted photos of himself on Twitter helping or at least pretending to be helping Texas residents, Meyers said. But seemingly helping the residents in dire need just isn’t going to cut it, Trevor Noah said.

“This is the political version of coming home with flowers the day after Valentine’s Day,” Noah said. “I don’t know why politicians try to do these lame photo ops. They turn people who need real help into political props. “

Watch their segments below.

Cuomo: America Has ‘By no means As soon as Stopped to Honor’ COVID Victims